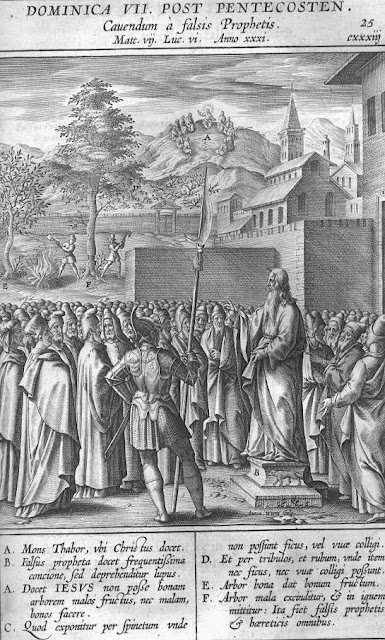 GOSPEL Matthew 7:15-21
At that time, Jesus said to His disciples: Beware of false prophets, who come to you in the clothing of sheep, but inwardly they are ravening wolves. By their fruits you shall know them. Do men gather grapes of thorns, or figs of thistles? Even so every good tree bringeth forth good fruit, and the evil tree bringeth forth evil fruit. A good tree cannot bring forth evil fruit, neither can an evil tree bring forth good fruit. Every tree that bringeth not forth good fruit shall be cut down, and shall be cast into the fire. Wherefore by their fruits you shall know them. Not every one that saith to Me: Lord, Lord, shall enter into the kingdom of heaven; but he that doeth the will of My Father who is in heaven, he shall enter into the kingdom of heaven


Our Saviour Christ doth not without cause compare Heresy, to thorns, saying: Do men gather grapes of thorns prick non bu those that come at them, and handle them: but Heresy will creep to us from foreign Countries we know not how, as the heresy of Luther out of Germany, of Calvin out of France,together with the vices & sins attending upon them, as drunkenness, riotousness, liberty from the yoke of obedience to the Churches laws, especially such as belong to penance and strictness of life,as keeping of the lent & the like,wherewith many Catholic are much infected: and as the heretics of other countries are busy,craftily to convey their heresies into our country, so are our no less industrious to disseminate and disperse it.

Wherein we may note likewise their industry, fury, and vehemency,which they falsely call Zeal,wherewith they do it, more commonly then Catholics do, to plant and propagate the Catholic Religion, that as Christ observed and told his disciples of worldings which he called , the children of this world, that they were more prudent in their kind then the children of God: So are heretics, who are the children of Sathan, more industrious and zealous in their heresy, then the children of the Catholic Church, in their religion.
Judas was more industrious to betray Christ then his disciples to watch with him.
When he prayed in the Garden the night before his passion, & took  three of his principal disciples with him, they were ſo drowsy that they could not watch with him one hour but fell a sleep, in ſo much that Christ was fain to say unto them, what, could yet not watch with me one hour? but Judas watched all the night.
That there should always be such S. Paul did foretell us, saying, there must be heresies, that it may be tried who be found, and those that be not, may be punished for their tardity, & levity in their faith, with the loss thereof.
We must look for ſuch in every age, as there have been heretofore, and will be still, and not think it strange or false, as some do that are come to this dullness and stupidity of heart, that seeing many contrary Religions, think none to be heresy, but that they may be saved in any: whereas natural reason tells us there can be but one truth, & S.Paul tells us plainly, there is but one God, and one faith.
And what these Heretics are S. Paul describeth in these words: I know, saith he, that after my decease there shall enter among you ravening wolves, meaning Heretics, not sparing the flocks, and there shall men arise out yourselves, teaching perverse things, that they may draw away disciples after them; where we may note besides the hurt that Heretics do us, in devouring our souls (in regard whereof Saint Paul here calleth them ravening wolves as Christ doth) the cztreme hun- gºrthey haue, like unto the unger of wolves to deuourg the white and innocent ſheep of Jesus Christ, and to incorporate them into themselves. óz make them diſciples and foiſowers of their Scét; and well may hereſy be called a Sečt, of the Latin word Secare, to cut of, becauſe they do not only cut of themselves fro the union & Communion of the Catholic church, of which they were once so happy as to be members, as S. Paul expreſſeth in these words aforesaid (There shall men arise, out of your selves, teaching #. aerſe thinges) but also endeavor all they can to cut off others, as is expreſſed in theſe wordes (and draw diſciples ºf ter them. ) When thoſe miſ. creants in the garden of Gethsemane set upon our innocent lamb Chriſt Jesus, with what fury, and rage did they (being many ) aſſault him being but one,as if it had ben ſo many ra- ūCI1OUIS uenous bloody wolves upon one poor ſeely lamb, and as if every one would have devoured him alone f
Whereupon Christ said thus unto them: This now if your hour and the power of darkness, as if he should say , as the Devils, if I should give them leave, would execute their malice upon me, with all extremity, so do you now being his miniſters, I look for no better at your hands: and as they did to Christ then being the head of his Church; ſo no doubt, will heretics now being the miniſters of the Devil, with the like fury, and rage ſet upon Catholics being members of the body of Christ, so far forth as God shall permit them for our trial, or punishment for our sins; and ſo much the more they will prevail and deceive , by how much the more they cover themselves being wolves with the skins of sheep that is to ſay, with Pretence & *: of All- ſanétity, and the word of God, mily, is of which point of S. Paul say thus : Theſe falſe “Apofiles ( of whom he had ſpoken before) are crafty workmen, transfºgaring themſelves into the Apoffler of Christ, and no marvel for Satan transfigure himself into an Angel of light; therefore it is no great matter if his ministers transfigure themſelves, as if they were the miniſters of righteousness, whoſe end shall be according to their works.
The best remedy againſt theſe ravening wolves is to endeavor by earneſt prayer, and service of God, to obtain of him, that he will vouchſafe to send into his Church watchful dogs, that is to ſay, vigilant, learned, and zealous Pastors, and Preachers to defend the flock of Chriſt from ſuch ravening wolves, as Heretics be, that hunger and thirſt for nothing more then to devour the sheep of the Catholic Church; and thus we are to do at all times, but especially upon the Ember-week, when the Church uses in every Diocese, to consecrate priests and Pastors, being especially times of prayer, and fasting appointed for that Purpose.