The First Cause of the institution of the blessed Sacrament , to communicate himself to everyone in particular. 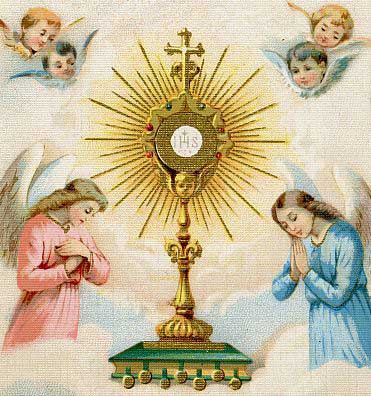 The First Cause of the institution of the blessed Sacrament , to communicate himself to everyone in particular.
Such is the nature of Goodness, that it doth not only perfit, enrich, and adorn the subject wherein it resides, but also enable it with an overflowing virtue to communicate it self unto others. Goodness spreadeth it self abroad: and for this cause we see the Sun, for that it is good in itself, communicate his Virtue unto others, dispersing his beams upon the earth: the air, because it is good conserve the soul: the sea in regard of native goodness allege the fishes: the earth endued with the like, lends her lap to metals and herbs: in fine, since all creatures that bountiful hand of God framed received in their first printing some form of goodness.  God did see all that he had made and they were very good consequently they received virtue to communicate their goodness to others.
And thus all creatures be good in themselves, and profitable to their neighbors. Beſides we prove by daily experience, how they are not content to lend their trends some little parcel of their perfection, but as much as they have, so much they bestow, so that the sphere of such their communication answer in proportion to the degree of the natural substance and engrafted perfection, so that earth produce earth, water bring forth water, fire kindle fire, a horse engender a horse, an eagle breedeth an eagle, a man begetteth a man, whereupon the Philosophers grounded their Axiom, every like produceth like. If these drops of goodness fallen from God their immense ocean sea, if these beams of perfections issuing from their everlasting Sun, if theſe dying leaves of bounty, shaken off that never fading tree of life, extend the limits of their goodness so far, what bounds can contain his goodness which is boundless what measure can be prescribed to him that is immeasurable? Where shall his bounty border which is infinite, nothing being equal to God? Therefore his native goodness enforced him to communicate himself to mankind, which mystery was effected by incarnation.
But because this favor in substance was only proper to Christ's humanity, though in operation. virtue and efficacy sufficiently offered for all: therefore the bounty of God was not extended enough, it lacked a further communication, that every man in particular might participate his infinite bounty and perfection, not in virtue alone, but in substance also. The Sun lends the earth his beams, yet the substance remain in heaven but lo in this blessed Sacrament God hath with his beams joined the sun, with his divine virtue linked his divinity, and not only by effect, but also by person enter into the breasts of all the faithful, which come to receive him. Here he maketh every man partaker of himself, of his substance, as well divine as humane: And therefore the sphere of his goodness cannot be farther extended, since every one receive that which is infinite and God himself.
Email Post