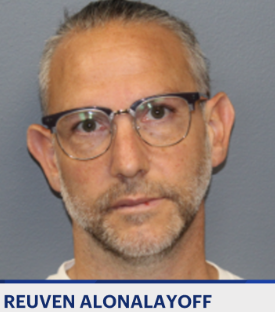 N.J. hospital marketing director arrested after cache of 39 guns, ammo found in office closet A New Jersey hospital marketing director was arrested this week after a bomb threat at the facility led police to discover a cache of weapons and ammunition stashed in an unlocked office closet. Reuven Alonalayoff, who worked at Hudson Regional Hospital, was taken into custody Sunday at Newark Liberty International Airport with assistance from the U.S. Department of Homeland Security Investigations. Alonalayoff, 46, of Elmwood Park, was charged with possession of an assault firearm and two counts of possession of a high capacity magazine. Lawyer information for him was not immediately available. His arrest comes weeks after the hospital received a phone call on July 18 that a bomb was in the facility, the Secaucus Police Department said in a news release.Officers, along with bomb detection canines, swept the hospital. It was a canine that flagged the unlocked closet, according to officials. “Upon entering the closet, police discovered a large cache of rifles, shotguns and handguns, along with assorted ammunition for the firearms,” police said.In total, authorities found 11 handguns of various calibers, 27 rifles/shotguns and a high-capacity magazine with 14 rounds, according to authorities. They also located a Kriss Vector .45-caliber semiautomatic rifle with a high-capacity magazine and determined it was an assault rifle, police said. Authorities learned the bomb threat was a hoax and investigated the arsenal of weapons. Source
Email Post