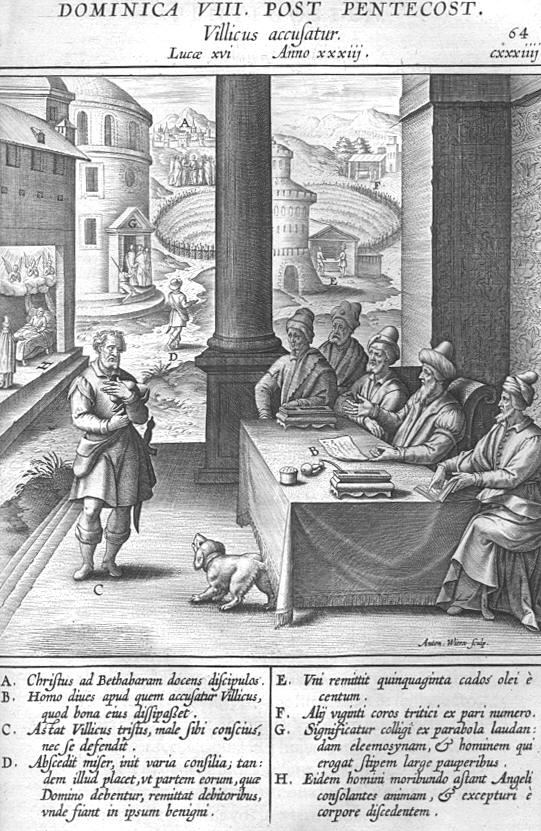 GOSPEL Luke 16: 1-9
At that time, Jesus spoke to His disciples this parable: "There was a certain rich man, who had a steward; and the same was accused unto him that he was wasting his goods. And he called him, and said unto him, 'What is this that I hear of thee? render the account of thy stewardship; for thou canst be no longer steward.' "And the steward said within himself, 'What shall I do, seeing that my lord taketh away the stewardship from me? I have not strength to dig; to beg I am ashamed. I am resolved what to do, that, when I am put out of the stewardship, they may receive me into their houses.' And calling to him each one of his lord's debtors, he said to the first, 'How much owest thou unto my lord?' And he said, 'A hundred measures of oil.' And he said unto him, 'Take thy bond, and sit down quickly and write fifty.' Then said he to another, 'And how much owest thou?' And he said, 'A hundred measures of wheat.' He saith unto him, 'Take thy bond, and write fourscore.' "And his lord commended the unrighteous steward because he had done wisely: for the sons of this world are for their own generation wiser than the sons of the light. And I say unto you, Make to yourselves friends by means of the mammon of unrighteousness; that, when it shall fail, they may receive you into the eternal tabernacles."
Tuesday Meditation


If a bailiff might not only be allowed, but also be persuaded by his Master to give away his goods, and to make himself friends therewith, that when he is not able to do his office any longer, they may receive him into their house, & maintain him: would we not think him a very imprudent and unprovident bailiff, that would not do it, but expose himself to starve, when he is old, and cannot dig,nor labor, and is ashamed to beg, because he might have holpen himself? and peradventure if he should, no body would give him, but rather laugh him to scorn.

Christ doth not only persuade & exhort us to make us friends of our riches, as aforesaid, which yet are his goods, concredited and committed unto our charge,and we but bailiffs thereof: but would highly commend us for it, as he did this bailiff, who though he gave him a bailiff of iniquity, as he calleth riches Mammon of iniquity, yet he commended him for it, and proposed him for an example for us to follow in our spiritual bailiff ship, saying he had done prudently for himself, and done prudently for himself, and that the children of the world were more prudent in their kind, and generation, that is to say in their temporal affairs,then the children of God, in their spiritual: a plain objurgation, or expropriation of their folly and carelessness therein; our souls being of so much more worth, then our bodies, and we receiving, when we give an Alms to a poor body, a far greater good then we give.