Meditation For Thursday Morning: How Our Savior Was Crowned With Thorns + How Pilate Said To The People Ecce Homo + How Christ Bare The Cross Upon His Shoulders 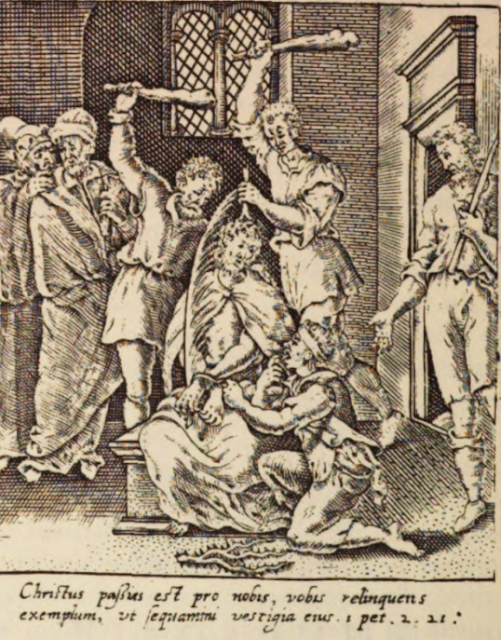 THURSDAY IN THE MORNING
This day, (when thou hast made the sign of the Cross, and prepared thy self hereunto) thou hast to meditate, and consider: How our Savior was crowned with thorns: how Pilate said of him to the people, Ecce Homo. Behold the man; and how he bare the Cross upon his ſhoulders.
THE TEXT OF THE HOLY EVANGELISTS
When our Savior had been thus whipped and scourged, the soldiers of the president took him into the common hall, and there gathered about him the whole band. And they Thursday morning. they ſtripped him, and put upon a robe, a crown of thorns, and put it on his head, and a reed in his right hand. And they bowed their knees before him, and mocked him, saying: Hail o king of the Jews: and spit upon him, and took the reed, that he held in his hand, and smote him on the head therewith. Then Pilate went forth again, and said unto them: Behold I bring him forth to you, that ye may know, that I find no fault in him at all. Then came Jesus forth, wearing a crown of thorns, and a purple garment. And Pilate said to them: Behold the man. Then, when the high priests, and officers, save him, they cried saying: Crucify him, Crucify him: Pilate said unto them. Take ye him, and crucify him. For I find no fault in him. The Jews answered, and said: We have a law, and by our law he ought to die, because he made him self the son of God. Then when Pilate heard that word, he was the more afraid, and went again into the common hall, and said unto Jesus. Whence art thou? But Jesus gave him no answer. Then said Pilate unto him. Speakest thou not unto me knowest thou not, that I have power to crucify thee, and have power to looſe thee Jesus answered: Thou couldest have no power at all againſt me, except it were given thee from above: Therefore he that delivered me unto thee, hath the greater sin. From thence forth Pilate sought to loose him. But the Jews cried out, requiring to have him crucified, and their cries prevailed. And Pilate determined to accomplish their request. And he let looſe unto them him, that for an insurrection, and murder, was caſt into prison , whom they deſired, and delivered Jesus unto them, to doc with him , what they would.
And they took Jesus, and led him away, And he bare his Cross, and came into a place, that was called Calvary. And there followed him a great multitude of people, and of women, which bewailed, and lamented him. But Jesus turned back unto them, and ſaid: Daughters of Jerusalem weep not for me,but weep for your selves, and for your children. For behold, the days will come, when men shall say. Bleſſed are the barren, and the wombs that never bare, and the paps that never gave suck. Then shall they begin to say to the mountains: fall upon us: and to the hills: Cover us. For if they do these things to the green tree, what shall be done to the dry.
M E-Thurſdaie morninge. 81. =mº - - MED IT ATIONS V P ON T H E S E P O Y N T E S O F T H E T E X T. O M E forthe O yee dawghters of Sion, and beholde kinge Sa- 6 lomon with the crowne, where- S § with his mother crowned him at - the daie of his eſpouſels , and vpon the daie of the ioyefulnes of his harte. O my ſowle, what doeſt thou? O my harte, what thinkeſt thou? O my tounge, how is it, that thou arte become domme: What harte is not broken? What hardnes is not mollified? What eies can abſteine from teares, and la- mentation, beholdinge ſuch a pittiefull and dolefull fight, as this is 2 O my moſt ſweete ſauiour, and redeemer, when I open myne cics, and doe beholde this dolorous Image, which is here ſet before me, how is it, that my harte doth not euen cleaue and rente in ſun- der, for verie anguiſhe and griefe: I ſee the moſt tender head of my Lorde, and ſauiour, pearced with crewell thornes, at whoſe pre- ſence the powers of heauen do tremble, and quake: I ſee his diuine face ſpitted vpon, and buffeted: I ſee the lighte of his goodſiebrigh- te forehead, obſcured : I ſee his cleare eies dimmed , or rather blinded with ſhowers of bloude: I ſee the ſtreames of bloude, tricklin- ge downe from his head: which faulle ouer --- L ij
Email Post