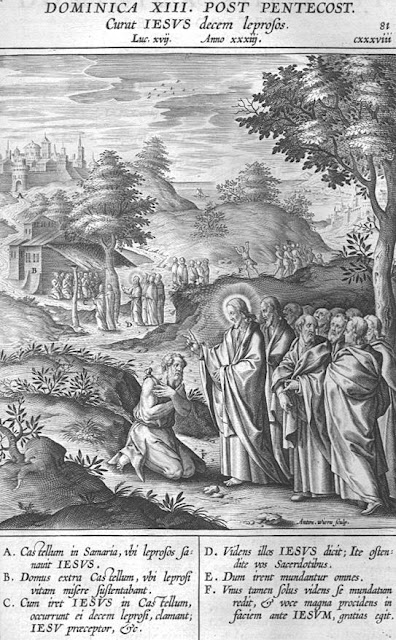 Those that would and cannot avoid the occasions of sin, by reason of their Office, or condition of life, unless they should relinquish, and leave, & fly into the wilderness, what remedy or redress is there for them?

Mary one remedy is, that they would avoid them if they could, and that it is against their will, and they take no delight therein, of which St. Augustine sayth: No sin can hurt thee, if it doth not delight thee.

But there is another remedy, if we can use it well, that will make a man as strong and immovable, amidst all occasions of sin, as an army in battle array, & it is this: To have God always in our sight.

This did the prophet use: I had God always, sayth he, in my sight, and he was at my right hand, that I was not moved, that is I did always in the occasions of sin, consider and see that God did behold me an all my works, words, and thoughts.

If we consider this well, and that as St. Paul sayth, no creature is invisible to God, but all things lye naked, and manifest unto his eyes, it will be a great encouragement to us to do that which is good and pleasing unto him, & a great bridle to abstain from bad; no man being so impudent as to abuse his benefactor to his face, though peradventure he may be so ungrateful as to forget himself towards him behind his back, or so as he cannot easily be convinced thereof: nor no soldier so dastardly minded, as not to fight valiantly under the eye of his King, or Captain.

When some in the Canticles of Solomon did ask a certain woman, in the person of a devout and faithful soul, which is called the Spouse of Christ, what is she, that marcheth on, terrible like an army in battle array?

Christ her spouse answereth for her: I descended into my garden of nuts, to see the fruit of the valleys and to see how my vineyard did flourish, and yield forth her pomegranates.

And a little after, he asketh this question: What do you see in the Sunamite, meaning his Spouse, but armies of dancers? Which two namely, armies, and dancers, do as ill agree, if we take it literally, as any two things can.

For what have effeminate Dancers to do with a camp or army of valiant Soldiers, armed to fight? But that it hath a mystical meaning, and it is this.

That even in them that swim in the pleasures & delights of the world, and live in the midst of the occasions of sin, if God doth descend into the vineyard, or garden of their souls, to see what fruit they carry, or how they carry themselves in the midst of all their pleasures and occasions of sin: if, I say, God the spouse of their souls doth descend to behold this, that is to say, if they do always behold, consider, & see that God doth always see and behold them, and all their works words and thoughts, especially if they behold him as a most living spouse of their souls, together with all his benefits towards them, you shall see nothing in them but armies, that is to say, men living in all manner of pleasures and occasions of sin, and so jovially and merrily, as if they were dancing, and yet as strong and immovable as an Army to any mortal sin, notwithstanding the manifold occasions thereof, wherein they are enforced to live.

This was that which made the Patriarch Abraham to overcome himself so much, as to have killed, and sacrificed to God, his only begotten son, in whom God had promised to multiply his seed, as the stars of heaven, believing, as it were, against belief, and hoping, as St. Paul sayth, against hope; for how could his seed be multiplied as the stars of heaven, when he had but one son, and he to be slain when he was young, before he had seed? Yet I say, Abraham would have slain him, and trusted in God that he would perform his promise, because he considered that as God was the commander of it, so he was a spectator of all, and therefore he called the place where this act was to be done (Our Lord doth see) both because he did see it, as also because he gave him grace, to see and consider, that he did see it, and he seeing God with a will to perform his commandments God did see him with the eye of his mercy, to spare his son’s life, and to reward him for his obedience, and make him an honorable example of obedience and confidence in Gods promise, to all posterity, being therefore called by this honorable Title, Of the Father of Faith: and even thus will God make them, that have him always before their eyes, to overcome all occasions, & temptations against the commandment of him.