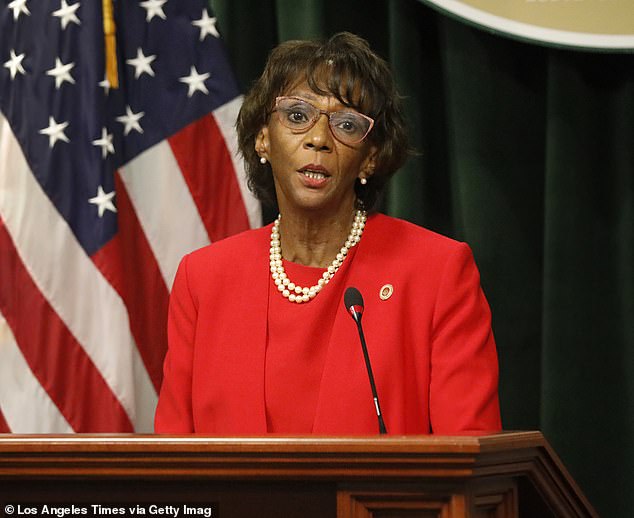 Illegal immigrant who killed two in attack on Vegas showgirls escaped violent crime charge last year after DA failed to prosecute in time - would have faced up to four years in jail if convicted of domestic violence charge
The man accused of stabbing eight and killing two in Las Vegas on Thursday walked free from another violent crime charge last year after the district attorney failed to prosecute in time. Court documents exclusively obtained by DailyMail.com reveal that Guatemalan alleged undocumented migrant Yoni Barrios, 32, was charged in 2019 with criminal domestic violence by Los Angeles district attorney Jackie Lacey, who has since left office. Had he been convicted, Barrios would likely have been imprisoned and deported and would not have been free to commit the senseless slaughter on the Vegas strip this week.But Lacey failed to bring the case to court in time, and after 90 days elapsed the judge was forced to dismiss the case under California speedy trial laws, court records say. Barrios was also prosecuted for driving dangerously and without a license in Riverside, California in 2016. After his arrest on Thursday Barrios told detectives he was from Guatemala and wanted ICE to take him home, according to a report released by the Las Vegas Metropolitan Police Department (LVMPD). Sources at the Department of Homeland Security told Fox News they believed he is an undocumented migrant, and does not have a visa. A criminal docket for Barrios obtained by DailyMail.com shows he was charged in July 2019 with criminally injuring a spouse, cohabitant or fellow parent in an act of domestic violence. If charged as a felony, perpetrators can be sentenced to up to four years in prison. Barrios’ docket says the alleged incident occurred on August 18, 2018. Lacey filed the case a year later, but the first pre-trial hearing was left until more than two years later on April 8 2021. Source
Email Post