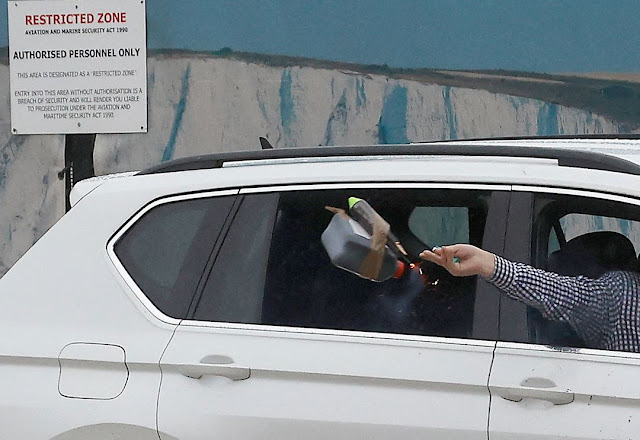 Moment man hurls three petrol bombs at Dover immigration centre as witnesses claim he was 'laughing' before driving to petrol station to 'kill himself' - as police identify suspect and Army bomb squad move in to inspect car over fears of more explosives
A 'laughing' man hurled three petrol bombs at a Dover immigration centre before driving to a nearby petrol station to 'kill himself', with an army bomb squad then moving in to inspect the car over fears of more explosives. The attacker, a white man wearing a checked shirt, drove up to the centre in a white SEAT sports utility vehicle on Sunday morning. He threw three petrol bombs with fireworks, one of which did not go off, a photographer said. He reportedly drove to a nearby petrol station to kill himself, it was said. Police arrived minutes afterwards and cordoned off the area. Witnesses at the scene described seeing the man laughing as he threw the bombs, as others reported hearing an explosion at the scene. Graham Hall, a 60-year-old international lorry driver from Market Harborough, was nearby when he heard the explosion. He said: 'I was by my truck and I just heard this bang — I thought it was a bird scarer or something, so didn't really think much about it. 'Then a couple hours later I heard what happened, it was like all hell broke loose.' 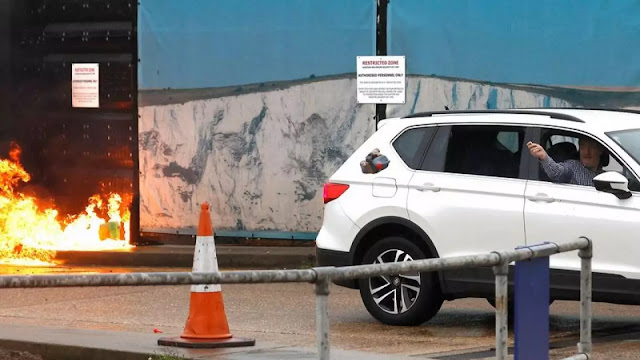 Eye witness Mark Williamson, 59, an international lorry driver from Leeds, was on the scene moments after the driver died. He said: 'I saw the dead guy just after it happened. I was going to meet my mate for a coffee and I saw the fella in the white vehicle sort of hanging out the window. 'The next minute, armed response turned up. It was surreal.' Kent Police have not confirmed a death in relation to the attack, and said the suspect has been 'identified and located'. Gary Smith, 31, who saw the incident said that the man laughed as he threw the petrol bombs. 'I was walking over a nearby bridge and I could see him throwing the bombs,' he told The Sun. 'They we're making loud bangs. I think he threw about four or five. He was just laughing while he was doing it. It was crazy.' 'I heard what I thought was cannons going off and thought it must have been an event,' another witness told Kent Online. 'We paused the TV to hear. There were at least six or seven. 'To think it was actually explosions that we heard is just so upsetting. I really hope no one is hurt.' The incident came after almost 1,000 migrants arrived in the UK after crossing the Channel on Saturday. Army bomb disposal units have been seen inspecting the car allegedly involved in the incident. Police have cordoned off a BP petrol station on the A20 opposite the Home Office immigration centre, formerly known as Tug Haven. Officers can be seen standing by a white 69-plate SEAT SUV - believed to have been driven by the suspect. The area has been sealed off with police tape, while the vehicle, which is parked by the rear car wash, has been covered with blue tarpaulin. A bomb disposal pick-up truck was also spotted at the petrol station - with two Explosive Ordnance Disposal (EOD) experts seen examining the SUV. Source
Email Post