FSSP Rad Trads Calling For The Assassination Of Pope Francis? When Will Anyone Do Something About Bergoglio? 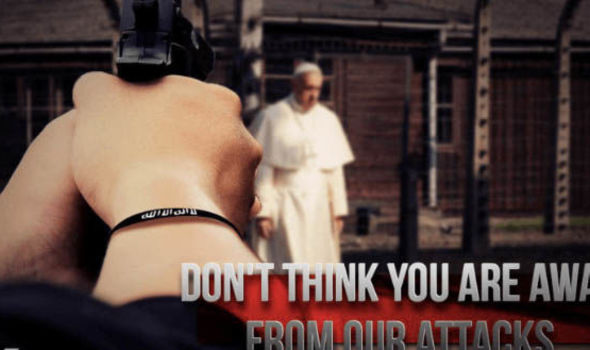 “The Holy Father will suffer a great deal. I will be with him until the end and receive his sacrifice. “The mischievous would attempt his life several times to do harm and shorten his days but neither him nor his successor will see the triumph of the Church of God. Our Lady of La Salette 19 Sept. 1846 (Published by Mélanie 1879)
Priests and religious orders will be hunted down, and made to die a cruel death. Our Lady of La Salette 19 Sept. 1846 (Published by Mélanie 1879)
"If I’m assassinated, at least make it painless. Pope Francis 10 MARCH 2015
Are FSSP and ISIS working together to Assassinate Pope Francis?
FSSP to finance the ISIS Assassination attempt on Pope Francis?
Who in the FSSP is communicating with Muslim Terrorists?
Here is FSSP Rad Trad begging for some layman to do something to rid us of Pope Francis:
2. When will anyone do something about Bergoglio? There are still several good Bishops left. Some good Cardinals. How can anyone with a functioning brain + Catholic sensibility NOT see that this guy is an antipope and a destroyer. I sometimes wonder whether anyone would act even if Bergoglio live-streamed a gay blessing on two people in the very act of sodomy. Hello? Synod on synodality? Really? They’re just laughing at you. I shudder to think what is said at the sodomite frivolities held on Vatican grounds about our total lack of response to the (attempted— I know the Church will last until the end) destruction of the visible Church. Source
Muslim loving Barnhardtite comments:

It won't be long before a FSSP Rad Trad Layman takes matters into his own hand and tries to murder Pope Francis.
When will this take place?
Probably at the funeral of Pope Benedict.
Will keep you posted on FSSP Assassination attempts of Pope Francis
Here from 2015 on ISIS secretly planning to assassinate Pope Francis:
Pope Francis: If I’m assassinated, at least make it painless
Pope Francis knows he can be assassinated at any moment — but he wants his killers to at least “make it painless” because his holiness says he’s “a real scaredy cat when it comes to physical pain.” Speaking to a tabloid newspaper in Buenos Aires nearly a year after the first ISIS plot to kill him was revealed, the pontiff opened up about the frightening possibility of being murdered in cold blood. “Look, life is in God’s hands,” the pope told La Carcova News, according to the Italian newspaper Gazzetta del Sud. “I have said to the Lord: take care of me. But if your will is that I should die or that they do something to me, I ask you one favor: that they don’t hurt me. Because I’m a real scaredy cat when it comes to physical pain.” Francis — who was a nightclub bouncer before joining the seminary — was answering questions submitted collectively by residents from the town of Villa La Carcova.

The local parish priest, Jose Maria Di Paola, otherwise known as Father Pepe, was in charge of interviewing him. The Islamic State has issued several threats over the past year against the pope, whom they refer to as the “bearer of false truth,” according to the Catholic News Agency. Back in August, the terrorist organization claimed that Francis was “in the cross hairs of ISIS” as they planned to “raise the level of confrontation” in Europe. Just two months ago, an assassination plot to kill his holiness while he visited Manila was thwarted by the Philippines military, the Breitbart News Network reported. Even though the Vatican denied the close call, a former Special Action Force commander testified before the Philippine senate that a notorious Malaysian terrorist known as Marwan had planned to detonate a bomb Jan. 18 as the papal motorcade began its trip in Manila.Speaking to Italian police Jan. 22 amid fears that ISIS had been secretly plotting to kill him for months, Francis said he was well aware of the threats — adding that his faith had given him the strength to brush them off. “On the horizon we see shadows and dangers which worry humanity,” he said, according to the International Business Times. “As Christians we are called not to lose heart or be discouraged.” Source
ISIS and FSSP desire the same thing.
ARCHBISHOP VIGANO IS THE TWO FACE NAPOLEON: