Moment 'female bomber' is arrested by Turkish police after CCTV 'showed suspect holding a rose fleeing the scene' following explosion that killed six including a little girl and her father
New footage shows the moment the Syrian woman believed to be behind a bomb attack on a bustling street in Istanbul was arrested by Turkish police. The explosion killed six people, including a nine-year-old girl and her father, and injured 81 others after Ahlam Albashir allegedly planted a bomb in the popular shopping street of Istiklal Avenue on Sunday shortly after 4pm local time. Today police footage shared with Turkish media that shows officers arresting Albashir, who is from Syria, at a house where she was allegedly hiding. During her interrogation, Albashir confessed to planting the bomb and said she was trained as a 'special intelligence officer' by Kurdish militants, Istanbul police said. She had entered Turkey through north-west Syria's Afrin region, the police added. The suspect's arrest comes as CCTV appears to show the suspected bomber running away from the scene of the explosion while holding a red rose in her hand, reports local newspaper Aksam. Minutes after the blast, the suspect, wearing what appears to be a hijab, is seen running through a crowd of bewildered people who were looking behind them at the aftermath of the bombing. She is the only person looking forwards. Albashir, who is believed to have planted a bag containing the bomb on a park bench, is among 46 people detained by police since the attack. Turkey accused the outlawed Kurdistan Workers' Party (PKK) - seen as terrorists by Ankara - of carrying out the explosion after Albashir told police that she had trained with the Kurdish militants. But the PKK today denied any role in the weekend attack in Istanbul. 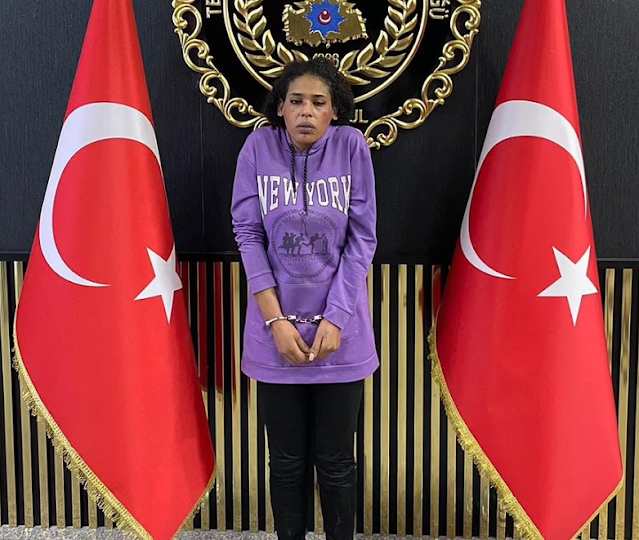 'Our people and the democratic public know closely that we are not related to this incident, that we will not directly target civilians and that we do not accept actions targeting civilians,' the group said in a statement published by the Firat news agency. Firat is close to the PKK, which is listed as a terror group by Turkey and its Western allies. The United States offered their condolences to Turkey over the suspected terror attack - but this was rejected by Ankara as Turkish president Recep Tayyip Erdogan accused Washington of supplying weapons to Kurdish fighters in northern Syria. It comes after a nine-year-old girl Ecrin and her father Yusuf Medyan were confirmed to be among those killed in the attack, with 81 others injured. A 15-year-old girl and her mother were also among those killed in the attack. Mr Medyan worked for Turkey's ministry of family and social services, Sky News reports. The department's minister, Derya Yanik, said: 'I curse this treacherous attack that killed a father and his daughter. 'As the state, we stand by the families of our brothers and sisters who lost their lives and with our wounded people with all our means. No evil focus will be able to disrupt our unity and solidarity.' Turkish television broadcast footage purporting to show Albashir being detained at a house where she was allegedly hiding. It said police searching the house also seized large amounts of cash, gold items and a gun. Police later also released a photograph showing the suspect standing between two Turkish flags, in handcuffs. The minister told reporters that Kurdish militants had allegedly given orders for the main suspect to be killed to avoid evidence being traced back to them. Source
Email Post