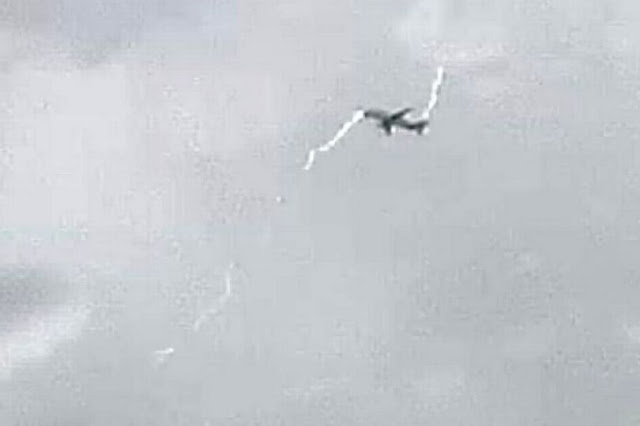 Shocking moment lightning strikes Airbus Beluga over Deeside as 'explosion' heard
This shocking image shows a plane being struck by lightning as it flew over Deeside. The Airbus Beluga XL5 was hit by a bolt of lightning soon after departing Hawarden Airport in Flintshire just after 1pm today (Tuesday). The aircraft was on route to Hamburg and had only been in the air for a short period of time before being struck. The flight continued as normal, and landed safely in the German city shortly after 2.30pm, North Wales Live reports. Following the strike, which was caught on dashcam, dozens of people reported hearing a huge "explosion" sound, and a bright white flash. People reported power cuts and the loss of TV signal following the reports of lightning. Airbus confirmed the strike and said the aircraft will be thoroughly checked ahead of its next take off. A spokesperson for Airbus UK said: "At 1pm today, Beluga XL5 departing Hawarden Airport was struck by lightning. "This is a routine event in aviation and the aircraft continued with its journey to Hamburg as planned. In accordance with standard operating procedure, the aircraft will be inspected before its next flight." Residents of Connah's Quay took to social media to report hearing a huge bang and flash of lightning earlier today. They reported power cuts, with fire crews also seen heading to the area. SP Energy Networks said they were aware of a fault in the Connah's Quay area, adding that there was not currently an estimated time for power to be restored. A spokesperson for North Wales Fire and Rescue Service added: "Two crews were called at 1.12pm to Breeze Hill, Connah’s Quay. Source
Email Post