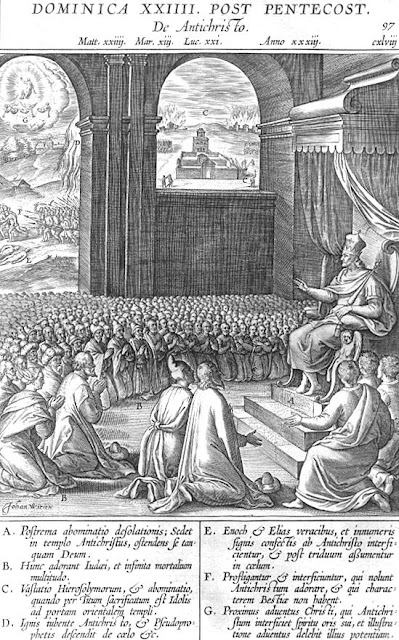 Gospel Matt. 24. v. 15.
At that time, Jesus said to His disciples: "When therefore you shall see the abomination of desolation, which was spoken of by Daniel the prophet, standing in the holy place: he that readeth let him understand. Then they that are in Judea, let them flee to the mountains: And he that is on the housetop, let him not come down to take any thing out of his house: And he that is in the field, let him not go back to take his coat. And woe to them that are with child and that give suck in those days. But pray that your flight be not in the winter or on the sabbath. For there shall be then great tribulation, such as hath not been from the beginning of the world until now, neither shall be. And unless those days had been shortened, no flesh should be saved: but for the sake of the elect those days shall be shortened. "Then if any man shall say to you, 'Lo here is Christ,' or 'there': do not believe him. For there shall arise false Christs and false prophets and shall shew great signs and wonders, insomuch as to deceive (if possible) even the elect. Behold I have told it to you, beforehand. If therefore they shall say to you, 'Behold he is in the desert': go ye not out. 'Behold he is in the closets': believe it not. For as lightning cometh out of the east and appeareth even into the west: so shall also the cowling of the Son of man be. Wheresoever the body shall be, there shall the eagles also be gathered together. "And immediately after the tribulation of those days, the sun shall be darkened and the moon shall not give her light and the stars shall fall from heaven and the powers of heaven shall be moved. And then shall appear the sign of the Son of man in heaven. And then shall all tribes of the earth mourn: and they shall see the Son of man coming in the clouds of heaven with much power and majesty. And he shall send his angels with a trumpet and a great voice: and they shall gather together his elect from the four winds, from the farthest parts of the heavens to the utmost bounds of them. "And from the fig tree learn a parable: When the branch thereof is now tender and the leaves come forth, you know that summer is nigh. So you also, when you shall see all these things, know ye that it is nigh, even at the doors. Amen I say to you that this generation shall not pass till all these things be done. Heaven and earth shall pass: but my words shall not pass."

The prophecy is this: When you see, as it is related here in the Gospel, the abomination of desolation, standing in the house of God,then let him that readeth understand, to wit, that Antichrist is at hand.