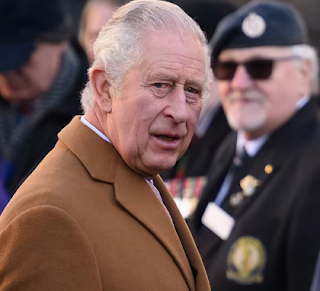 Domestic Terrorist with an egg
Man 'throws an egg at King Charles' during walkabout before being arrested on suspicion of common assault - exactly one month after the monarch was targeted in similar stunt in York
King Charles had an egg hurled at him for the second time in a month today, with police arresting a man for common assault. Bodyguards quickly intervened to move the monarch away from the scene of the disturbance on St George's Square in Luton. Bedfordshire Police confirmed a suspect had been arrested and is now being questioned. Charles, 74, was unfazed by the incident and quickly resumed shaking hands with members of the public after being moved to a different area. The incident comes four weeks after 23-year-old Patrick Thelwell was arrested for throwing an egg at the King and Queen Consort during a visit to York. The royal couple had just arrived in the city on November 9 to unveil a statue in honour of the late Queen at York Minster when a figure in the crowd threw four eggs, all of which missed. Thelwell was later identified as a former University of York student who stood as a Green Party candidate in York for the 2019 local elections. He later claimed to have been banned from carrying eggs in public or going within 500 metres of the monarch. Today, the King looked relaxed as he met members of the public during his visit to Luton, just a day after the Duke of Sussex spoke of a 'dirty game' in a trailer for his new Netflix series. The royals are braced for another barrage of allegations from Harry and Meghan when the series launches on Thursday. Today, the couple are in New York for the Ripple of Hope gala, where they will receive an award for their 'heroic' stand against 'structural racism' in the Royal Family. Source
Email Post