Meditation For Wednesday Morning: meditate upon the presentation of our Savior before the bishops, and Judges. 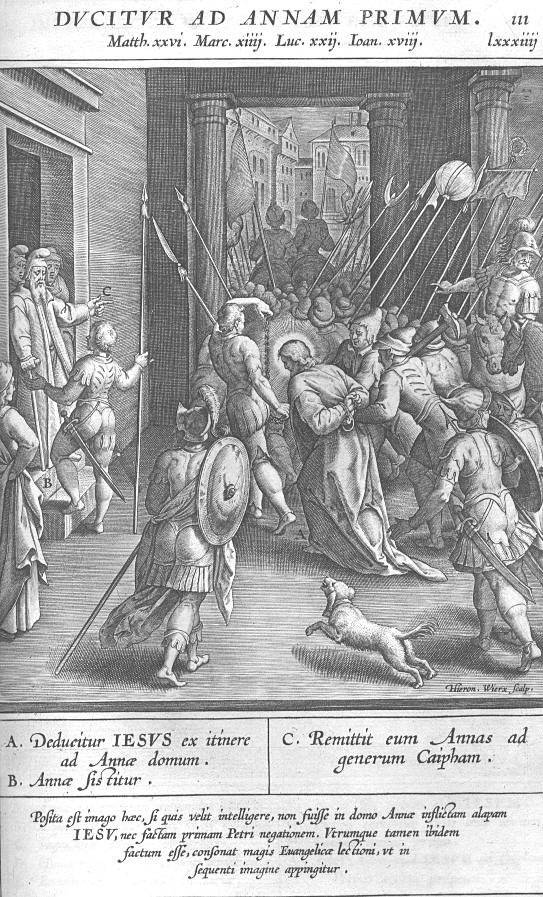 When our Savior was brought before Annas the high priest, he demanded him of his Disciples, and of his doctrine. Jesus answered him, and ſaid: I spake openly to the world, I ever taught openly in the synagogue, and in the temple, whither all the Jews resort continually, and in secrete have I ſaid nothing why asks thou me? Ask them that heard me, what I said unto them. when he had ſpoken theſe words, one of the officers, that stood by, smote Jesus with his hand, saying, Answer thou thus the high priest: Jesus anſwered him. If I have evil spoken, beare witness of the evil: But if I have well spoken, why smite thou me.
And Annas sent him bound unto Caiphas,where the doctors of the law, and the ancients of the people were gathered together. And the high priest, and the Scribes, and the whole counsel, sought for false witness againſt Jesus, to put him to death, but found none, though many false witnesses came thither, but their witness agreed not together. But at the last, came two false witnesses, and said. This man said. I can destroy the temple of God, and build it up again in three days. Then the chief priest arose, and said to him: I conjure thee, in the name of the living God, that thou tell us, whither thou be Christ the son of God. Jesus said to him. Thou hast said it. Nevertheless I say unto you. Hereafter shall ye see the son of man sitting at the right hand of the power of God, and come in the clouds of the heaven. Then the high priest rent his clothes, saying: He hath blasphemed, what need we any more witneſſes: Behold, ye have now heard his blaspheme. what think ye. They answered, and said, he is worthy to die. Then spat they in his face, and buffeted him, and others gave him blows on his face, saying.  Areede O Christ, who is he, that smote thee.
The next day in the morning, the whole multitude of them arose, and led our savior unto Pilate. And they began to accuse him, saying: we have found this man perverting the people, and forbidding to pay tribute to Caesar: saying: that he is the king Messiahs. And Pilate asked him, saying: Art thou the king of the Jews? And he answered him, and said: Thou said it. And when he was accused of the chief priests, and elders, he answered nothing. Then said Pilate unto him. Hear thou not, how many things they say against thee? But He answered him not to one word, insomuch that the president marveled greatly, Then said Pilate to the high priests, and to the people. I find no fault in this man. But they were more fierce, saying: He moved the people, teaching throughout all Judea, beginning at Galilee even to this place.
Now when Pilate heard of Galilee, he asked whether the man was of Galilee born. And when he knew he was of Herod's Jurisdiction, he sent him to Herod, who was also at Jerusalem in those days. And when Herod saw Jesus, he was exceedingly glad. For he was deſirous to ſee him of a long season, because he had heard many things of him, and trusted to have seen some sign done by him. The high Priests and the Scribes stood forth, and accused him vehemently. And Herod with his men of War contemned and mocked him, and put a white garment upon him, and ſent him again to Pilate.
And by reason of the solemnity of the feast of Easter, the president was wont then of custom to deliver unto the people a prisoner, whom they demand. And there was at that time a notable malefactor in prison, called Barrabas. When they were then gathered altogether, Pilate say unto them: Whether of the two will ye that I let lose unto you, Barrabas, or Jesus, that is called Christ: And they answered: Not this man, but Barrabas. This Barrabas was cast into prison. Then said Pilate unto them: What shall I do then with Jesus, that is called Christ. They cried all: let him be crucified. Then Pilate took Jesus, and scourged him. 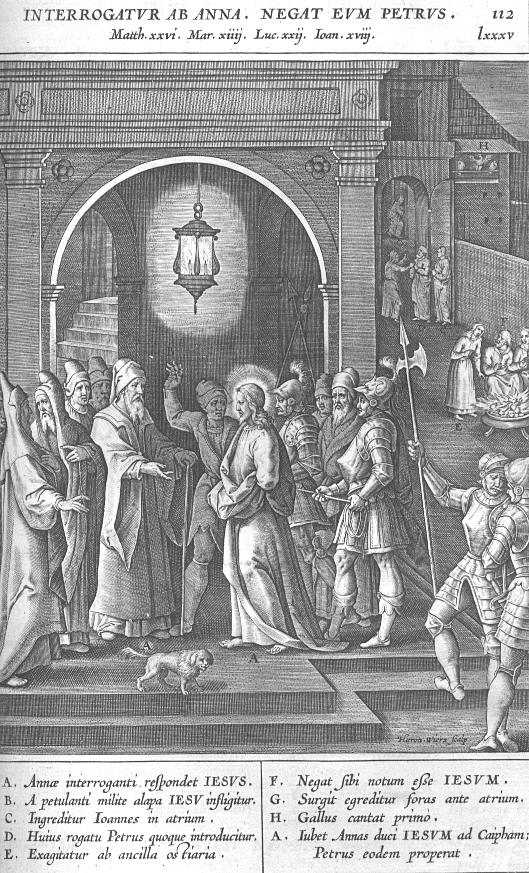 OF THE VEXATIONS AND TROUBLES OUR SAVIOR SUFFERED the night before his Paſion; and of the deny all of S. Peter. $. II. Nº
CONS1DER after this, what trou- tº bles our ſauiour ſuffered in that do- Tºlcrull night, when the ſouldiars that had him in cuſtodie, mocked and lawghed him to ſcorne (as S. Luke ſaieth,) and vſed as a mean to paſſe awaic the ſleepi- nes of the night to ſcoffe and ieſte at the Lor- de of maicſtie. Conſider now (6 my ſowle) how thy ſweete ſpowſe is ſet here as a marcke, to receiue all the ſtrokes and buffettes they could geue him. O cruell night! O vnquiet night, in which thou (O good Ieſus) tookeſt no reſt at all, neither did the ſouldiars repoſe them ſelues, but accomptcd it euen a paſtyme and recreation to vexe, and torment thee!The night was ordeined for this ende, that all crea- tures ſhoulde therein take theire reſt, and that the ſenſes and members that are wearied with the toyles and labours of the daie, might be refreſhed,and relieued: but theſe wicked men vſe it now as a fit tyme to tormente all thy members,and ſenſes,ſlrykinge thy bodie, affli- Čtinge thy ſowle, bindinge thy handes, buffet- tinge thy cheekes, ſpittinge in thy face, and lugginge thee by the eares, that at ſuch time as all members are wonte to take theire reſt, - all 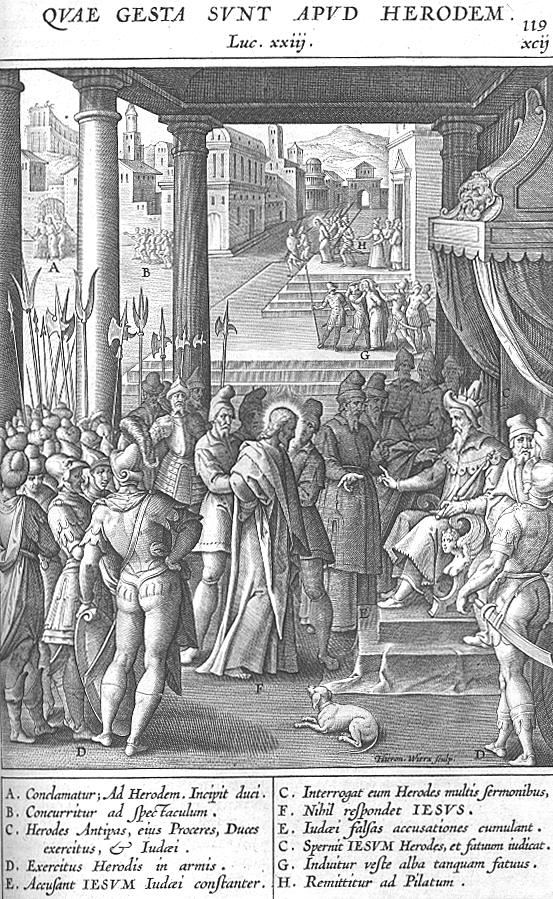 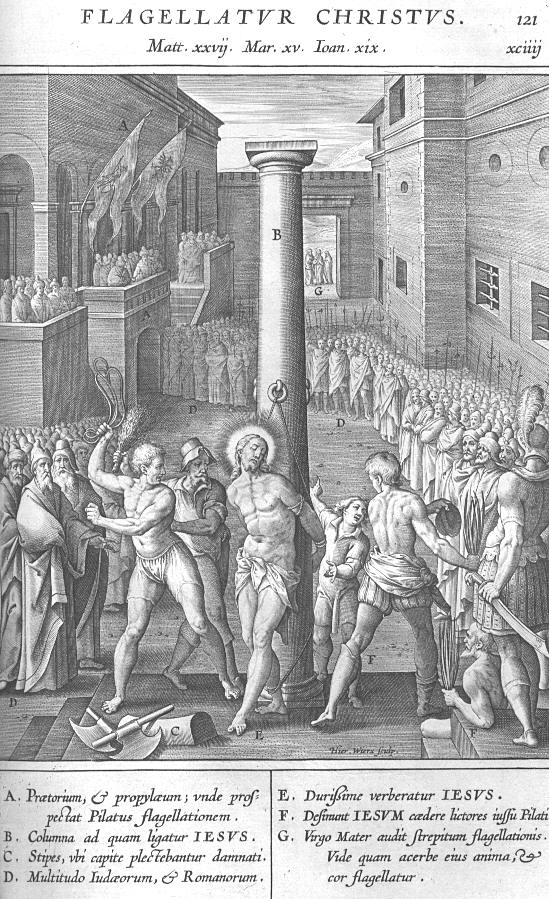