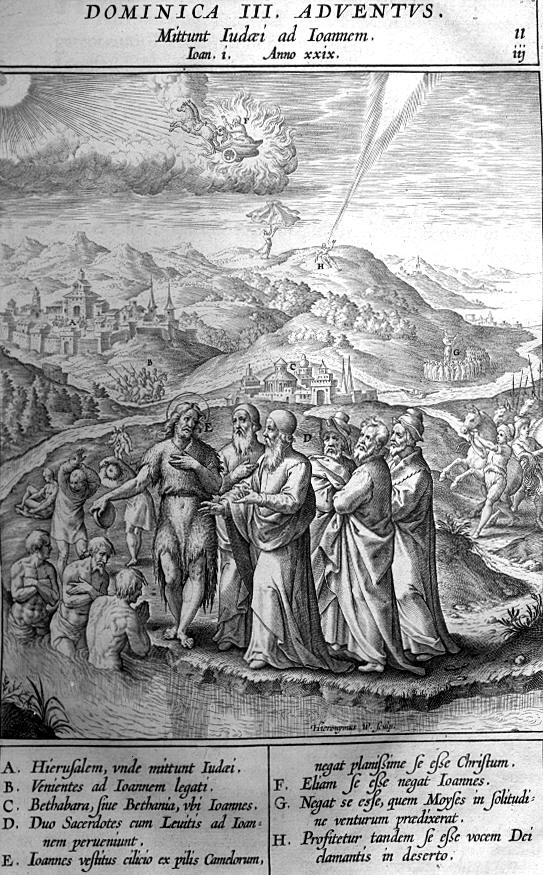 
Consideration for Sunday
Till St. John was to preach, he willingly remained in the wilderness; when he was sent, he willingly went forth to preach.
Whereby we are taught, not to seek after great offices, and advancement of ourselves, until we be called or chosen by others: and being chosen, especially by superiors; then to obey.
Jacob & Esau contented, & Strove in their Mothers womb, whether should go forth first.
Jacob was meek: Esau stern, and fierce.
It should seem that Jacob would have come first, I and and been his fathers heir; (for so God made him afterward) and therefore Jacob, when Esau was gotten forth, took hold of his heel, as if he would have with held him, and gone forth first himself.
But he prevailed not: for Esau was first born, and consequently by birth-right his father's heir.
This contention, and ſtrife of theirs made ſuch a commotion and trouble in their Mothers womb: that she thought it would have been her death; and said: I was long barren, and our Lord hath ſent me children, but I had been better without; thinking indeed this would have proved the death of herself, and the both.
Yet at last she was safely delivered of both.
But Esau Came forth first all hairy, and a fierce fellow: Jacob fair, and meek, and a holy man.
But God transferred the inheritance upon Jacob by the prerogative of his supreme power, and will.
Such is the condition many times of ambitious persons, both ecclesiastical, and temporal, to the great prejudice, and detriment of Church, and common wealth: the worser sort, and such as are very inſufficient, and unworthy, with bribery, force, & flattery carry offices, and authority away, from those that are most sufficient, and worthy thereof, as if it were Esau from Jacob; making a scandalous contention there about in the womb of their mother the Church.
When God commanded Moses to go into Egypt, to deliver his people from bondage; he alleged many excuses put of that charge: but God said unto him go thy ways, I will be with thee, I will be in thy mouth, teaching thee what to speak.
And yet did Moses reply again, saying. I beſeech thee, o Lord, to send him, whom thou art to send, that is to say, to send another fitter for that end.
Yet God elected him, and sent him and being so sent from God be discharged that great task beyond all human expectation.
Where we may learn, that as those, who are most unworthy, commonly are moſt forward to advance themselves to places, and offices of great dignity and charge: so they who are moſt worthy are moſt backward therein, and hardly induced thereunto, out of the acknowledgement of their own unworthiness.
Who, although they may modestly excuse themselves, and truly endeavor to avoid the offices which they are called unto by order, and authority, as Moses did: yet must they not absolutely reject the call by disobedience; being assured; that since it is not their own ambitious desire, but lawful authority which call them thereunto; God will assist them, as he did Moses, and be in their hart, and mouth to teach them what to say, and do in discharge of their duty.