Dr. Taylor Marshall feels so comfortable that he is now deceiving his audience.
He thinks he can get away with it - because he has all of you under his spell. Read  2 Thessalonians 2.3 and see how Dr Taylor Marshall deceives everyone:
Saturday of Ember Week in Advent: Missa 'Veni et Ostende'
EPISTLE ¤ II Thess. 2. 1-8
Lesson from the second Epistle of blessed Paul the Apostle to the Thessalonians.
Brethren, We beseech you by the coming of our Lord Jesus Christ, and of our gathering together unto Him: that you be not easily moved from your sense, nor be terrified, neither by spirit, nor by word, nor by epistle as sent from us, as if the day of the Lord were at hand. Let no man deceive you by any means: for unless there come a revolt first, and the man of sin be revealed, the son of perdition who opposeth and is lifted up above all that is called God or that is worshipped, so that he sitteth in the temple of God showing himself as if he were God. Remember you not that, when I was yet with you, I told you these things? And now you know what withholdeth, that he may be revealed in his time. For the mystery of iniquity already worketh: only that he who now holdeth do hold, until he be taken out of the way. And then that wicked one shall be revealed, whom the Lord Jesus shall kill with the spirit of His mouth, and shall destroy with the brightness of His coming.
I will say it again Dr. Taylor Marshall is evil and probably possessed.
Listen for yourself in his latest podcast
"Pope Benedict says Time of the ANTICHRIST is NOW...Is the Pope right?"
I posted below.
Marshall reads word for word  from the Douay-Rheims Bible versus 2 Thessalonians 2 but when he comes to the word REVOLT he replaces the word with APOSTASY!
Marshall does this Twice - I captured it twice.
Later on Marshall claims that these are the direct quotes from Scripture - HE IS LYING.
When you add or subtract from Scripture the truth is not in you. 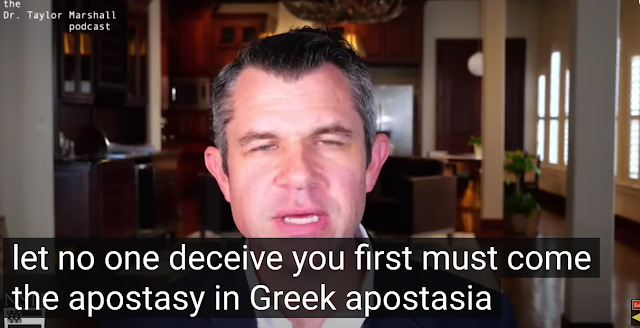 Marshall replaces the word REVOLT to APOSTASY because he has a narrative that the Antichrist is upon us and he ignores the Manifestation of the Forerunner to the Antichrist which comes first. He is a liar.
Here is the note from the on-line  Douay-Rheims Bible versus 2 Thessalonians 2
[3] "A revolt": This revolt, or falling off, is generally understood, by the ancient fathers, of a revolt from the Roman empire, which was first to be destroyed, before the coming of Antichrist. It may, perhaps, be understood also of a revolt of many nations from the Catholic Church; which has, in part, happened already, by means of Mahomet, Luther, &c., and it may be supposed, will be more general in the days of the Antichrist. Source
The word is REVOLT as in a REVOLT from the Divinely Ordained Authority of the Roman Emperor.
It is not Apostasy!
Marshall uses the word Apostasy as in apostasy in the Church since Vatican II.
Starting at 11 minute mark:
Does Marshall do the same in his book?
Does Marshall corrupt Scripture and replace the word Revolt with Apostasy In 2 Thessalonians 2.3?
I do believe this is what all the FSSP Rad Trad Influencers may be doing - replacing the word Revolt with Apostasy In 2 Thessalonians 2.3 to justify their attack on the clergy and Pope
So you can say I caught them in a lie - an evil lie.
I wonder if the source of this word replacement came from Archbishop Carlo Maria Viganò?
Viganò is the one who started calling Trump the Katechon he later changed it to the Papacy then the Church.
So I got a lot of work to do on if these evil men are replacing the word Revolt with Apostasy In 2 Thessalonians 2.3.... 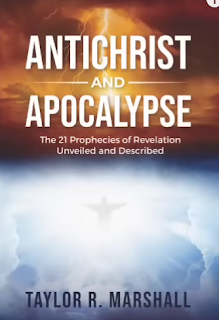