First Sunday After The Epiphany Which Is The Sunday Within The OCTAVES Thereof GOSPEL Luc.2.42 The Friday Meditation 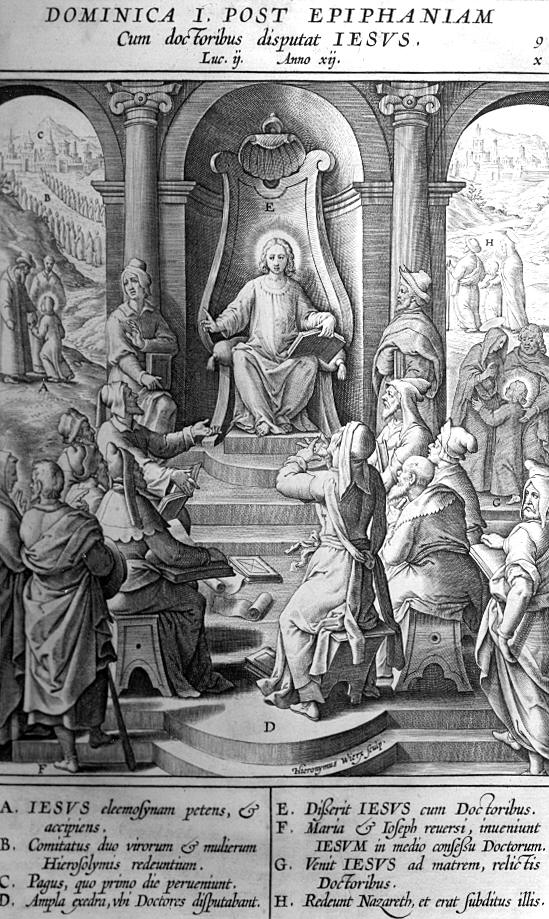 And the child Jesus remained in Jerusalem, and was lost.
As the blessed Virgin Mary conceived Christ and brought him into the world for our good: so she lost him (without any fault of hers, but because he would) for our good.
For first our, blessed Lady expostulating with him, why he lost himself, and made her, and Joseph seek him with so much sorrow; out of his answer which was this know, you not that I must do those things my father appoint me? out of this his answer I say, we may learn, that as parents have a great a great power over their children, and therefore children ought to obey them in all things that are just, & good: so on the contrary side, if parents command their children any thing that does hinder them in the service of God, their supreme, and sovereign parent; they ought not to obey them, but if need be in that case, to seem to be angry with them, to speak short unto them, and with respect to reprehend them: as Christ seemed to do here to his mother, for Christ say he that hate not his parents for me, is not worthy of me.
And Saint Jerome gives us this counsel, if our parents wholly hinder us from entering some religious Order, for the more perfect Service of God: In this case, say he , or like, If thy father, and mother did lye upon the the threshold of the door, where thou should go out, to hinder thy going out: tread upon they parents, and run away from them unto the banner of the cross, it is great piety in these cases, to be cruel.
Another lesson Christ left us of singular obedience to our parents, who having done the work of God, which was to tarry behind his parents, and to go to the Temple, and instruct the Doctors: went home with his parents, and was obedient unto them from that time which was when he was twelve years old, till he was thirty: for so long the gospel make no other mention of him, but that he went with them, and was obedient into them.
Another cause of his loosing was this: To signify thereby that, as he was lost, and wandered up, and down the city: So all mankind was lost, and gone astray from God the shepherd of their souls, after their own pleasures, as sheep use to do after fresh, and pleasant grass;  And as he that wanderer up, and down, and seek every where after sheep that are gone astray, and lost, seem as if he went to loose himself: So Christ in seeking out us that were lost, Seemed as if he went to loose himself.
He sought us in Bethlehem when he was a newborn babe in a stable, in the midst of winter at midnight, lying in a manger, between an ox, and ass where in he seemed to loose himself, to wit the power of his God head, as if he had not been God; he lost himself likewise in his circumcision as if he had not been God, but a sinful creature borne in sin, he lost himself in this presentation in the Temple, being presented to God as if he had not been God, he was subject to hunger , and thirst, he fasted, he prayed, he endured labor, and pains; he was reviled, scorned., blasphemed, scourged as if he had been the most notorious malefactor in the world, not worthy to live upon the face of the earth: In all these things, and a thousand more, in ſeeking us., he seemed to loose himself: that is to say the glory, and dignity of such a one as he was, God, and man in one person, the Savior, and redeemer of mankind.
Finally he lost himself in deed, for he lost his life in seeking us that were lost.
But Oh how true are these his words in the gospel he that loses his life for God, shall find it again: he found his life again in his glorious resurrection, and the lives of as many as are to be saved, for by his precious death, and resurrection are they saved.
A lively figure of Christ, was Joseph the Patriarch, who being sent by his father, not to seek sheep, but his brethren that keep sheep: wandered up and down he knew not whither, as if he would have lost himself: in so much that a certain man was said, not to meet with him, but to find him wandering up and down, as if he had loſs, himself, (as Christ did in Jerusalem, and in all these passages before rehearsed,) and being demanded of the man, whom he sought: he answered, my brethren.
So if we ask of Christ losing himself, and wandering up & down the streets as if he had lost somebody, whom seek you? he would answer (as Joseph did) I seek my brethren, I seek mankind, in the form of a man, that is gone astray, and lost: we may every one of us cry unto him the with Prophet David, I am one of that Kind I have strayed away like a sheep, O Lord seek thy servant.
A Plaine Path-Way To Heaven By Fr.Thomas Hill 1634