ABB somewhere down the line converted over to Islam. ABB is a liar and has not admitted that he is a Muslim convert. All the terrorist actions of ABB are taken from al-Qaida's handbook. ABB behaves like a Mulsim terrorist because ABB is a Muslim terrorist.

For what ever reason ABB has kept this dirty little secret from the public.

ABB had this to say this about growing his beard for Allah in his manifesto:

It was important for a "resistance" leader not to appear as a "caveman" like Osama bin Laden, "Book a professional photo session prior to [the] operation, .. Take a few hours in a solarium to look fresher,...Work out at least seven days prior to photo session. Cut your hair and shave. Visit a male salon if possible and apply light make-up. This might sound repulsive to big, badass warriors, but we must look our best for the shoot." Muslim Convert Anders Behring Breivik

ABB does not want to look like his terrorist mentor OBL. ABB does not like the cave man look. ABB knows that he must grow his beard for Allah and ABB aims to do it right with style. I was really surprised that the court would allow ABB to grow a beard. I guess the court and the media did not catch on about  how Muslim converts grow a beard for Allah to prove their devotion to the Jihadists cause. So the courts and the media fail to see the connection between ABB's beard growth and his conversion to Islam. The media and the court would rather not admit that they have been hoodwinked by ABB.

So lets start with the history of ABB and his beard for Allah. The first photo of ABB shows his stylish crescent beard. This photo was taken before his Muslim terrorist attack that killed 77 White Christians that would make OBL so proud:

This small start is a crescent shapped beard, similar to the Muslim crescent, such as found on top the Faisal Mosque in Islamabad, Pakistan:

Muslim Crescent At The Faisal Mosque

When ABB was captured and in custody a photo was taken of him  now growing his beard: 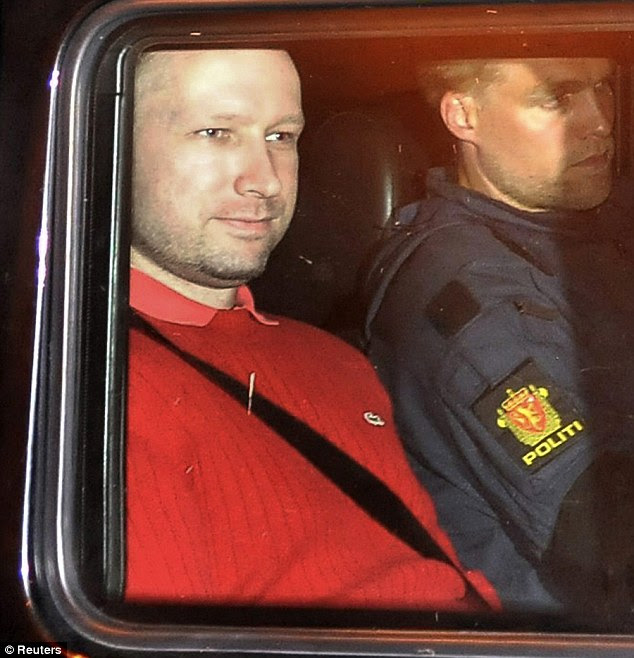 ﻿At his trial this week the world can see that ABB is still growing a beard for Allah just like his Muslim freinds do. ABB does it with style:

Will ABB continue to grow his beard for Allah? Will the court catch on and make ABB shave? Actually the court should demand that ABB shave to see how much of a fight he puts up. The more ABB refuses to shave will determine just how much of a dedicated follower of Allah ABB truely is.  Below is a detailed Muslim teaching on how a Jihadists should grow a beard for Allah:


What Islam says About the Beard


From The Shari Length of the Beard by Mufti Afzal Elias,
May Allah reward him abundantly, aameen.

Transferred to the web for the benefit of all Muslims by Islam.tc
This pamphlet is to emphasize the importance and the length of the beard. Many Muslims have queried regarding this point. I have also found that people prefer keeping a beard in imitation of what's in vogue rather than that prescribed by Nabi (Sallallahu Alayhi Wasallam). A compilation of this nature has become important because the impact of the western way of life seems to be luring unwary Muslims into such a craze that the importance of the beard itself is being doubted and scoffed at.

To those who feel the issue is trivial to worry about, may ALLAH guide him. But to those who genuinely wish to learn and practice what is right, here are sufficient proofs from the Qur'an, Ahadeeth, and learned scholars.

Concerning Adherence to the Sunnah in the Holy Qur'an:

"O ye who believe! Obey Allah, and obey the Messenger, and those charged with authority among you." (Quran 4:59)

"O ye who believe! Obey Allah and His Messenger, and turn not away from him when ye hear (him speak)." (Quran 8:20)

"O ye who believe! give your response to Allah and His Messenger, when He calleth you to that which will give you life; and know that Allah cometh in between a man and his heart, and that it is He to Whom ye shall (all) be gathered."(Quran 8:24)

"Ye have indeed in the Messenger of Allah an excellent exempler for him who hopes in Allah and the Final Day, and who remembers Allah." (Quran 33:21)

"What Allah has bestowed on His Messenger (and taken away) from the people of the townships,- belongs to Allah,- to His Messenger and to kindred and orphans, the needy and the wayfarer; in order that it may not (merely) make a circuit between the wealthy among you. So take what the Messenger gives you, and refrain from what he prohibits you. And fear Allah: for Allah is strict in Punishment." (Quran 59:7)

Importance of the Beard in the words of Rasulullah (Sallallahu Alayhi Wasallam):

(1) Rasulullah (Sallallahu Alayhi Wasallam) said "I have no connection iwth one who shaves, shouts and tears his clothing eg. in grief or affication."  - Reported by Abu Darda (R.A.) in Muslim, Hadith no. 501

(2) The teachings of Hadhrat Ammar Bin Yaasir, Abdullah Ibn Umar, Sayyidina Umar, Abu Hurairah and Jaabir (R.A.), indicate that ALL used to keep beards that were one fist length or more. Hadhrat Jaabir (R.A.) had said: "We used to grow long beards and only during Hajj and Umrah did we trim them to the required length (i.e. fist length)."

(3) Hadhrat Abdullah Ibn Umar (R.A.) relates that: "He who imitates the kuffar (non-believers) and dies in that state, he will be raised up with them on the Day of Qiyamat (Judgement)."

(6) Rasulullah (Sallallahu Alayhi Wasallam)said: "Act against contrary to the polythesists, trim closely the moustache and grow the beard." - Reported by Ibn Umar (R.A.) in Muslim, Hadith no. 500

(8) Rasulullah (Sallallahu Alayhi Wasallam) said: "Anyone who shaves has no claim to the mercy of Allah" - Reported by Ibn Abbas (R.A.) in Tibrabi

(9) Hadhrat Abdullah Ibn Umar (R.A.) used to cut that portion (which exceeds the grip of the hand) of the beard.  - Tirmidhi

The Beard according to the Great Imams of Jurisprudence

Imam Muhammed (R.A.) writes in his book "Kitabul Aathaar" where he relates from Imam Abu Hanifa (R.A.) who relates from Hadhrat Haytham (R.A.) who relates from Ibn Umar (R.A.) that he (Ibn Umar) used to hold his beard in his hand and cut off which was longer. Imam Muhammed (R.A.) says that this is what we follow and this was the decision of Imam Abu Hanifa. Therefore, according to Hanafies, to shorten the beard less than a FIST LENGTH is HARAAM and on this is IJMA (concensus of opinion).

Shekh Ahmad Nafarawi Maliki in the commentary of Imam Abu Zayed's booklet states, "to shave the beard is without doubt haraam according to all Imams." It is also mention in "Tamheed" which is a commentary of "Muatta" (Sunnan Imam Malik (R.A.)) that to shave the beard is HARAAM and among males the only ones to resort to this practice (of shaving) are the HERMAPHRODITES (persons who possess both male and female features and characteristics).
Hanbali

The Hanbalies in the famous Al-Khanie'a Hanbali Fatawa Kitab state that "to grow the beard is essential and to shave it is HARAAM." Also in the Hanbali Mathab books "Sharahul Muntahaa" and "Sharr Manzoomatul Aadaab", it is stated "The most accepted view is that it is HARAAM (prohibited to shave the beard)."

Also note, according to scholars of Islam: "To shave off the beard is unlawful (haraam) and one who shaves his beard is legally speaking an unrighteous fellow (FASIQ); hence, it is NOT PERMISSIBLE to appoint such a man as an Imam. To say Taraweeh behind such an Imam is MAKRUH-E-TAHRIMI (near prohibition)" (Shami Vol.1, p.523)

The Durre-Mukhtar states: "No one has called it permissible to trim it (the beard) less than FIST-LENGTH as is being done by some westernized Muslims and hermaphrodites." (Vol. 2, p. 155). Also, "It is forbidden (haraam) for a man to cut off another's beard." (Vol. 5, p. 359).

Thus, a Muslim who shaves or shortens his beard is like a hermaphrodite, his Imamate near prohibition, his evidence is not valid, he will not have the right to vote or being voted for. Shaving and shortening the beard is the action of non-believers. Imam Ghazzali (RA) says: "Know that the key to total bliss (Saadah) lies in following the Sunnah and in emulating the life of Rasulullah (Sallallahu Alayhi Wasallam) in ALL that issues from him, and in ALL his doings even if it concerns the manner of his eating, rising, sleeping, and speaking. I do say thisin relation to rituals in worship ONLY because ther is no way neglecting the Sunnah reported of him in such matters - but what I say INCLUDES EVERY ASPECT of his daily life." (Kitab al Arbain Addin, Cairo 1344, p. 89). Furthermore, in the Holy Qur'an, Allah told Rasulullah (Sallallahu Alayhi Wasallam) to say:

"Say: "If ye do love Allah, Follow me: Allah will love you and forgive you your sins: For Allah is Oft-Forgiving, Most Merciful." (Quran 3:31)

The daily recitation of a band of angels of Allah is "Holy is the Being who adorned men with beards and women with braids" (Takmela e Bahr al Raiq, Vol. 3, p. 331)

THE CALL IS TO GROW A FIST LENGTH BEARD, LET US HEAR AND OBEY TO PROSPER.

Muslims are overcome with western influence in their lives and it's easy to forget, nay, neglect the Sunnah of the Prophet Muhammad (Peace Be Upon Him). Little do these Muslims realize the magnitude of their actions in imitating Kufaar (see Hadith section). This is a truly shocking! Hopefully the information presented herein will enlighten those. And then there are others who claim that the matters concerning beards is a "little" issue not worthy of mention nor practice. To them I say get off the denial bandwagon, you're a Muslim! Follow the Prophet (Peace be upon him) in all aspects of life, for he was the best of examples. I couldn't tell you how many times I've mistaken a Muslim brother (outside of the Masjid) for a kaafir on account of his clean-shaven, well oiled, face. How can I say "Assalaamu Alaikum Brother!" when I do not know if he is a Muslim. Yet that very brother then wonders why he was ignored! Sure, he can tell if others are Muslim on account of their beard, but what about himself? From one brother to another, I say: "Grow a beard, then, since it also promotes Brotherhood in the real world. Stand with your Brothers, be one. We know you think you are handsome without it (a beard), but who cares? What matters is how Allah (S.W.T.) sees you. And when you do grow a beard, don't mock the Sunnah, please grow it correctly, i.e. FIST LENGTH. That is the prescribed length and no shorter (see Hadeeth section)..." Peace.