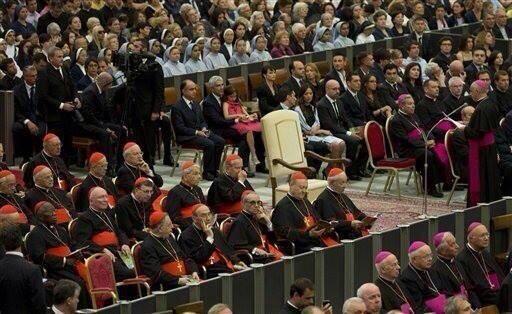 Now The Pope is gone missing?

Is this gonna be a trend now with Francis? unexplained absences?

Is Pope Benedict gravely ill and in need of last rites?

Whatever the reason for the empty chair - it better be a good one.


Pope misses Vatican concert due to other commitments

Organizers say Pope Francis didn't show up for a concert in the Vatican due to other commitments.

The pontiff was expected at a Beethoven concert, but Monsignor Rino Fisichella told the audience just before the concert was to start that Francis couldn't make it due to "commitments that could not be postponed." He did not elaborate.

The pope was smiling with no signs of tiredness when he greeted worshippers at a Mass in St. Peter's earlier Saturday. Unlike his predecessor Benedict, who was well-known as a music lover, Francis has shown scant interest in music, liturgical or otherwise.

Papal spokesman the Rev. Federico Lombardi said he had nothing to add to Fisichella's statement, and that the pope has confirmed his Sunday commitments.

For the entire afternoon, Francis did not leave his room at [Domus] Sanctae Marthae and simply told his associates: "I am not a Renaissance Prince who listens to music instead of working." Rorate Caeli