Mt. La Verna Where St Francis Received The Stigmata Is The Steep Mountain The Fatima Pope Climbs To Receive His Martydom Foretold By Our Lady Of Fatima

GHIRLANDAIO, Domenico
Stigmata of St Francis
Mt. La Verna (detail)
1483-85
I dreamed of this one here as Lord and huntsman,
pursing the wolf and the cubs up the mountain
(which blocks the sight of Lucca from the Pisans).

“J.M.J.
The third part of the secret revealed at the Cova da Iria-Fatima, on 13 July 1917.
I write in obedience to you, my God, who command me to do so through his Excellency the Bishop of Leiria and through your Most Holy Mother and mine.
After the two parts which I have already explained, at the left of Our Lady and a little above, we saw an Angel with a flaming sword in his left hand; flashing, it gave out flames that looked as though they would set the world on fire; but they died out in contact with the splendour that Our Lady radiated towards him from her right hand: pointing to the earth with his right hand, the Angel cried out in a loud voice: ‘Penance, Penance, Penance!'. And we saw in an immense light that is God: ‘something similar to how people appear in a mirror when they pass in front of it' a Bishop dressed in White ‘we had the impression that it was the Holy Father'. Other Bishops, Priests, men and women Religious going up a steep mountain, at the top of which there was a big Cross of rough-hewn trunks as of a cork-tree with the bark; before reaching there the Holy Father passed through a big city half in ruins and half trembling with halting step, afflicted with pain and sorrow, he prayed for the souls of the corpses he met on his way; having reached the top of the mountain, on his knees at the foot of the big Cross he was killed by a group of soldiers who fired bullets and arrows at him, and in the same way there died one after another the other Bishops, Priests, men and women Religious, and various lay people of different ranks and positions. Beneath the two arms of the Cross there were two Angels each with a crystal aspersorium in his hand, in which they gathered up the blood of the Martyrs and with it sprinkled the souls that were making their way to God.

There is a steep mountain spoken of by Our Lady of Fatima. I wonder why no one is looking for the location of the mountain - even the likes of a Dan Brown is not interested? No one 'cept maybe this blog has at least made a poor attempt in trying to locate the steep mountain.

Why is no writer of merit looking for the Fatima mountain? Is not the C.I.A. looking? The Swiss Guard?  Look, a major crime is going to be committed on this steep mountain - isn't best to try and locate possible sites and then try and figure out who the soldiers are that will kill the Fatima Pope and the faithful on this steep mountain? Will not this event be very newsworthy?

Here, is one possible location of the steep mountain: 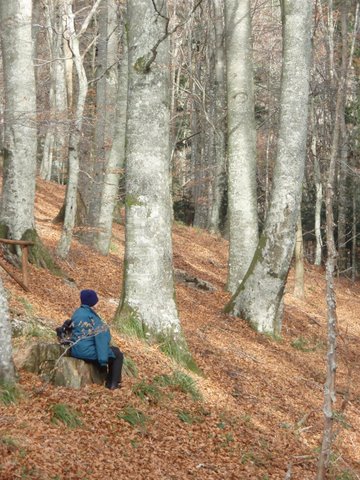 Mount La Verna is an isolated mountain hallowed by association with Saint Francis of Assisi, situated in the centre of the Tuscan Appenines, and rising about 4000 feet above the valley of the Casentino. Its name (Latin, Alverna) is said to come from the Italian verb vernare, to make cold or freeze.

On 8 May, 1213, La Verna was given to Saint Francis by Count Orlando of Chiusi as a retreat "specially favourable for contemplation". Thither the saint withdrew in August, 1224, to keep a forty days fast in preparation for Michaelmas, and it was while praying on the mountain-side that he received (on or about 14 September) the stigmata. Thenceforth La Verna became sacred ground, and Pope Alexander IV took it under his protection.

In 1260 a church was consecrated there in the presence of Saint Bonaventure and several bishops. A few years later the Chapel of the Stigmata was erected, through the munificence of Count Simone of Battifole, near the spot where the miracle took place. An older chapel, Santa Maria degli Angeli, which was built in 1218 for Saint Francis by Orlando, is approached from the sacristy of the Chiesa Maggiore, which was begun in 1348, but not finished until 1459. From the latter church the friars dwelling on La Verna go in solemn procession twice daily (at 2 P.M. and at midnight) to the Chapel of the Stigmata.

On the Feast of the Stigmata (17 September) and on other festivals, large crowds of priests with their people from neighbouring parishes, as well as strangers, visit the mountains, and on such occasions the friars often accommodate and entertain between 2000 and 3000 pilgrims. The convent was partly destroyed by fire in the fifteenth century; it suffered desecration also during the wars of this century.

In 1810, and again in 1866, the friars were expelled as a consequence of the suppression of religious orders. At present they are in possession of La Verna, which belongs, however, to the municipality of Florence. 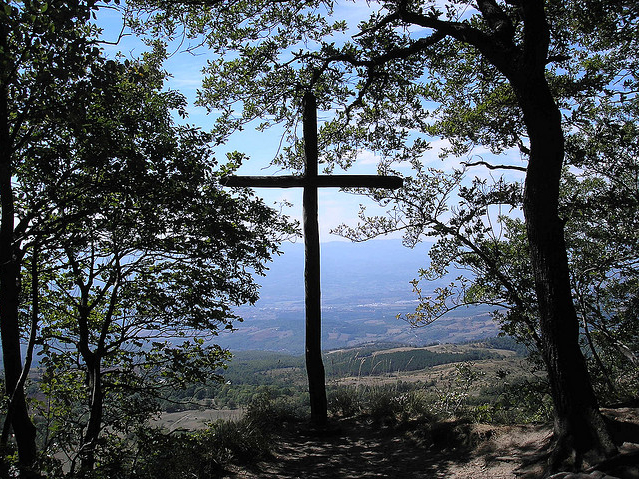 
Pope Benedict is 85. Can he make it up the steep mountain? No. he said so. This is the reason he resigned - his failing health:


'to the extent that I have had to recognize my incapacity to adequately fulfill the ministry entrusted to me. For this reason, and well aware of the seriousness of this act, with full freedom I declare that I renounce the ministry of Bishop of Rome, Successor of Saint Peter'

But the Pope said he will climb the steep mountain but by spiritual means through prayer and meditation:﻿


Dear brothers and sisters, I feel that this Word of God is particularly directed at me, at this point in my life. The Lord is calling me to "climb the mountain", to devote myself even more to prayer and meditation. But this does not mean abandoning the Church, indeed, if God is asking me to do this it is so that I can continue to serve the Church with the same dedication and the same love with which I have done thus far, but in a way that is better suited to my age and my strength. Let us invoke the intercession of the Virgin Mary: may she always help us all to follow the Lord Jesus in prayer and works of charity. Benedict XVI Angelus February 23, 2013

Some of you will one day find yourself on this steep mountain. Either you will be a solider in the Army of the precursor to the Antichrist or you will be on the side of Jesus Christ Crucified.  Which side will you chose?

I know for a fact that some have already declared their war on Jesus Christ Crucified, they have done so with their fanatical stockpiling of assault weapons and hoarding of food etc... waiting it out for the Antichrist and the New World Order, only coming out of their lairs to vote for some lily white Protestant candidate for President - "must defend modern democracy at all costs! even if means killing the Fatima Pope!"

You know these people as well. They are obstinate, very obstinate and they will one day die knowing that they helped to kill the Fatima Pope on a very steep mountain.

You've been warned time and again.