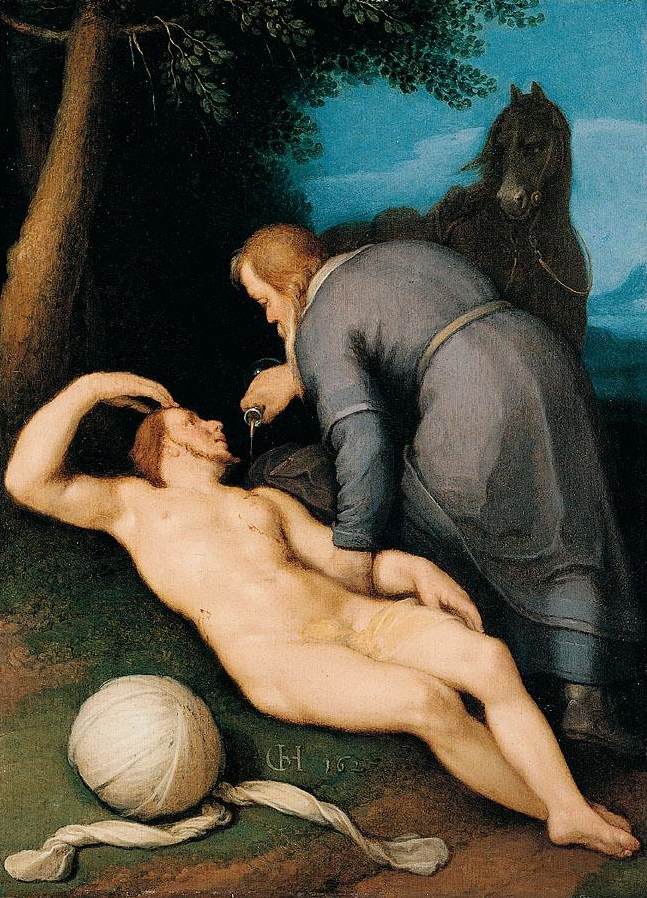 
In the love of God above all things else, and the love of all things else for God, & in God, which is called Charity, there is a certain order of priority and posteriority, that is to say, of preferring one person or one thing before another in our love, of which the devout soul in the Canticles, amongst other favors of almighty God her spouse towards her, numbreth this: He carried me into his wine Cellar, and ordered, or ordinated, charity in me, that is to say, taught me the order, and degrees of charity, which order or ordination doth consist in this: First to love God above all other things whatsoever, as is aforesaid in the precedent Meditation: next the salvation of our own soul: next unto that the salvation of our Neighbors soul: next unto that our own bodies, fame & fortune: next unto that, the salvation fame & fortunes of our Neighbor, and of our Neighbors to prefer in our love, those that are more virtuous and good, before them that are less, according to this precept of St. Paul: Do good unto all, but especially unto them of the household of faith: in which order, & gradation doth consist the perfect use and practice of charity.

This knowledge doth a devout soul esteem as a special favor of almighty God unto her, but we must understand she doth not mean only the bare knowledge hereof, but also the grace to perform it, without which she is in worse case, then if she had not known it at all, according to this sentence of our Saviour Christ, he that knoweth his Masters will, and doth it not, shall be beaten with many stripes.

And where it is said here in this Gospel, we must love our Neighbor as our self, it is not meant in the same order of priority or equality, or as much as ourselves, but to the same end as ourselves, that is to say, for God, and in Go: and that O love him not in word and show, but in deed and verity as myself: My dear children, sayth St. John, love one another not is word & tongue, but indeed and verity; and in loving mu neighbor thus for God, I love God: for where one thing is for another, as the Philosopher saith, both is one: and in loving God, I love my self; for as the Philosopher likewise sayth, our amicability or friendliness to another, is finally for amicability and friendliness to ourselves.

Having said these things of the love of God and our neighbor, a question may be asked, who is our Neighbor?

Such a question did the Lawyer here ask, to justify himself, taking none to be his Neighbor, but those that were neigh unto him, to wit, of his own Nation, the Jews, as he was, (for so the Jews did expound that Precept) or neigh unto him in kindred or blood, for so the word (Proximus) in Latin here used which we translate neighbor in English, as it were one that is neigh unto us, may signify; thinking if Christ had meant so, he could have justified himself, as one that had observed that commandment well enough.

But Christ in proposing this parable of the wounded man, and demanding him which of the three that passed by him, was his Neighbor, made him to answer himself, that he that showed mercy was his neighbor, though a Samaritan, & stranger, as the Jews accounted the Samaritans, and had no society, or commerce with them.

Whereby is signified, that every man in necessity or distress, is our neighbor, of what country or Nation, or condition soever he be, and we ought to relieve them if we be able, according to the order & degree of Charity aforesaid.

Those that be our neighbors or neigh unto us (for so the word Neighbor doth signify) we ought to be neighbors unto them in Charity to relieve them.

The word, Neighbor is a correlative word,as the word (Father) is, Father inferreth a Son, and a Son a Father.

A Neighbor that is in necessity or distress, inferreth a Neighbor to relieve him; and a Neighbor that relieveth another, infereeth, a Neighbor that hath need: and this is the reason why Christ being demanded of one correlative, answered by the other, to wit, being demanded by the Lawyer, who was his neighbor, that was to be relieved and loved as himself, answered not by him that was to be relieved, but by him that did relieve him, namely by the Samaritan that relieved the wounded man, not by the wounded man that was in distress, because it was all one to the question, one correlative inferring another.

The Mystical exposition of this parable is this; Adam and Eve, and in them all mankind, was the man that descended from Jerusalem, that is, from the happiness of Paradise unto Jericho, to wit, the banishment and misery of this world, & fell into the hands of thieves, the Devil and Sin, who robbed him of Original Justice, and Grace, wounded his Will with a strong natural inclination to evil and rebellion to good, being left but half alive, and that the worser half by a great deal, to wit, with a natural life prone to ill, having lost the supernatural life of grace, & original justice.

The Priest and Levite that passed by and saw the wounded man, and did not help him,was the old law of Moses, and the Prophets who saw in what case mankind was that is to say, did tell men, and make them see it, but could not help them.

The Samaritan which signify A keeper, is Christ, the true keeper & preserver of mankind: he bound up his wounds or original sin in baptism; he poured in the oil of hope, remission of actual sins, by the Sacrament of Penance, when  he hath actually sinned and is truly penitent for it, and the wine of the fear of Gods justice, to keep him from sin; he set him upon his own beast, to wit, his own flesh, when he did bare all the burden of our sins upon the Cross, to satisfy his Fathers justice therein, according to that of St. Peter, out of the Prophet Esay: He bare our sins upon the wood of the true Cross i his body; he brought us to the harbor, or Inn of the Catholic Church, he gave the Master of the Inn St. Peter, and his successors charge of us, saying: Feed, and govern my flock: he gave him two pence, or pieces of money, to defray the charge, to wit, the true sense & understanding of the precepts and doctrines, of the old and new Testament and if they added any thing thereunto, either by way of precept, or counsel, for their better government, he would approve it, & when he came to judgement reward not only the Governors of the Church, but every one that obeyeth them, according to everyones work.

Though this be an old benefit of God, yet we must not forget it, but be thankful for it as if it were a new, and it is every mans case.

Likewise we may apply this parable unto ourselves almost in this manner when we fall into actual sin, if it be mortal, and be tankful to Christ the good Samaritan for his merciful means he hath ordained for our delivery out of the same, by the Sacrament pf penance as often as we sin.

Lastly there was here, one of three that relieved this distressed man: but now alas, it is well, if one of twenty pass by a poor man, & relieve him.