MEDITATION ON OUR LORD'S PASSION: The Requiring Of Barabbas 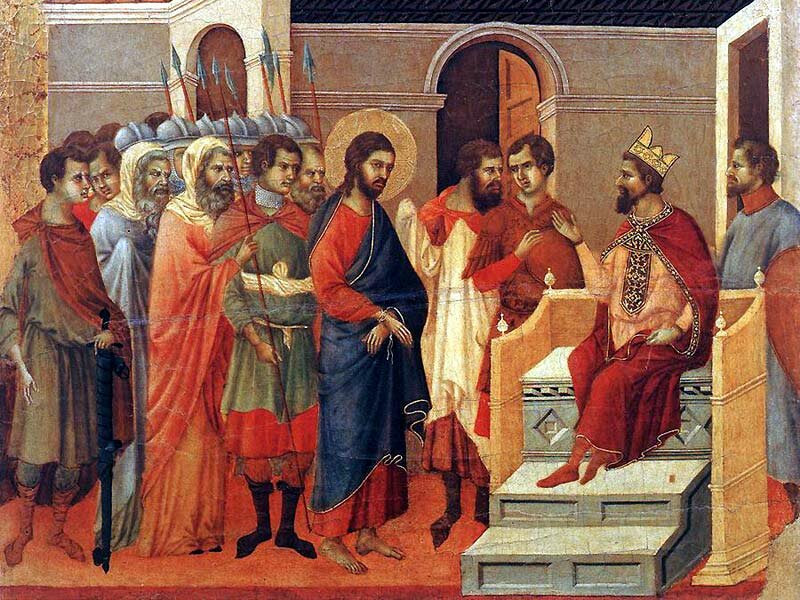 The 23 Meditation of the Requiring of Barrabas

But Pilate calling the chief Priest, and the Magistrates, and the people, said unto them: yee have offered unto me this man as averting the people; and behold I examining him before you, find no cause in this man of these things in which yee accuse him, no nor Herod neither, For I have sent yee unto him, and behold nothing worthy of death is done unto him: therefore I will dismiss him, being corrected: And on the solemn day, the President had a custom, and must of necessity dismiss one of the prisoners, whom soever they should require. And he had then A notable prisoner called Barrabas, who was taken with the seditious, who in the sedition had committed murder: Then Pilate said: yee have a custom, that I dismiss one in the Pasch: whome will yee that I dismiss unto you? Barrabas, or jesus, who is called Christ? For he knew, that the high priests had delivered him by envy.

Consider first, that Herod though he saw nothing worthy of death in Christ, yet he did not deliver the innocent out of the hands of the Jews; but to gratify the Priests, and the President he referred the knowledge of the cause to Pilate. In like manner every one desireth to please man, but none to please Christ.

Consider secondly, that so many Judges sought the life of Christ, and nothing was found worthy of death, or of imprisonment. Do thou so order thy life like unto Christ, that the Devils at the hour of death may find nothing of their own on thee. Purge thy soul with daily examination of thy conscience of the sins; so as nothing pass out of this world with thee, but that which is holy.

Consider thirdly (corrected of chastised I will let him go) Pilate thought to deliver our Lord, but corrected: not because he deserved it, but in favor of the raging people. That they might be satisfied with his stripes. Thou seest first, that the people could not be satisfied, but with the blood of Christ; both because evil men are delighted only in sins, which draw blood from our Saviour; and also because just men have no sweetness but through the blood of our Lord; nor any rejoicing, but in the Cross of our Lord Jesus Christ.

Consider fourthly, that Pilate intended a good work, when he purposed to set Christ free, but not pure, but mingled with much evil, to wit, with beating and whipping Christ. And thou doest imitate him, as often as thou attemptest any good thing, mixed with sin; when thou givest alms out of money evil gotten; or goest to the Church, that thou mayest seem religious, or doest any other thing not with a true intention.

Consider fifthly, when Pilate thought of the delivering of our Lord after this manner, then he remembered a more mild way. For he saw the people assembled together, that according to their custom one of the prisoners should be given unto them, whom they should choose out of many, which the President should propound unto them, of what crime so ever they were accused, and that in remembrance of the people of Israel, which about that time of Pasch were delivered out of the bondage of Egypt: When he remembered this Custom, he resolved to name Christ alone, (whom he knew to be well liked of many for his noble acts, and hated only of the Priests and Pharisees) with a Murderer, a Captain of the seditious, and a hateful man, making no doubt, but that they would choose Christ before that most wicked man. Thou seest first, that the Author of life is compared with a turbulent murderer: & thou art angry if never so little be detracted from thy honor and titles. Thou seest secondly the holy custom of delivering a prisoner in remembrance and favor of the benefit of their delivery out of the bondage of Egypt. Thou being so often delivered from the snares of the Devil, and from the bonds of sin; succor and help also thy neighbors in memory of this benefit, that by thy labor and help, they may be freed from the bonds of their debts, sins, miseries, and of all other evils.