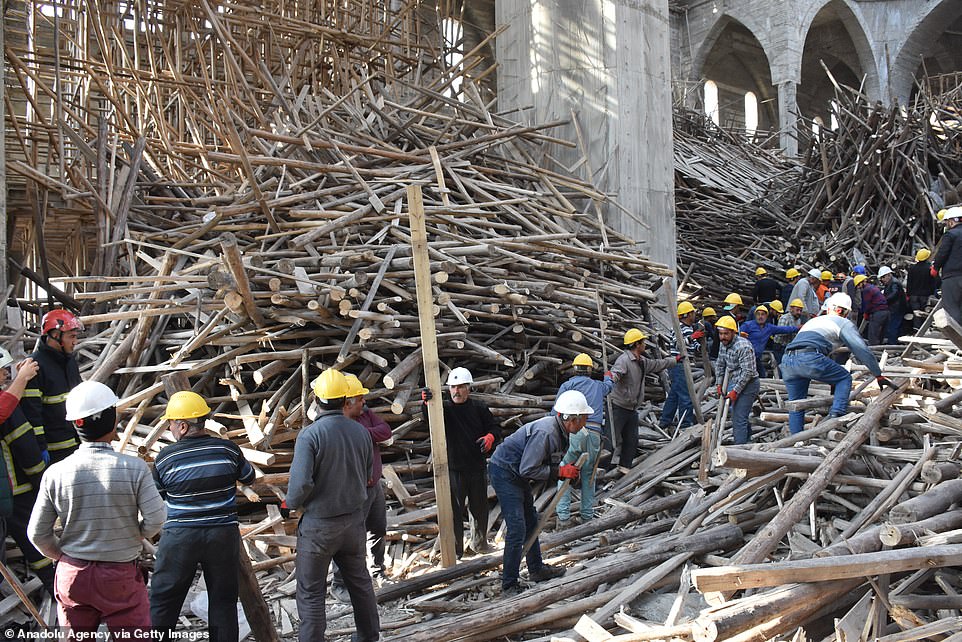 Paris will burn and Marseilles will be engulfed. Several cities will be shaken down and swallowed up by earthquakes.  Our Lady of La Salette 19 Sept. 1846 (Published by Mélanie 1879)

Muslims having their own DOOM....

Starting on Sunday with a Muslim march and ending on Thursday with a Dome collapse...

Thousands march in Paris against Islamophobia after attack

PARIS (Reuters) - Thousands marched through Paris on Sunday in an anti-Islamophobia demonstration that has divided France’s political class. Organizers said they had called the rally in a sign of support two weeks after a man with far-right connections fired shots in a mosque in the southwestern city of Bayonne, injuring two elderly men. Members of hard-left parties took part in the march - though some others in the center stayed away saying it threatened France’s tradition of secularism, and far right leader Marine Le Pen said the event had been organized by Islamists. Crowds walked through the capital waving banners marked with the messages “Stop all racism” and “Islamophobia is not an opinion but a crime” at the event organized by the Collectif Contre l’Islamophobie en France. “It’s up to us to demonstrate after an event like Bayonne to ensure the freedom of religion and thought that goes with it,” the head of the far left France Unbowed party, Jean-Luc Melenchon, told journalists. But the state secretary in charge of fighting discrimination, Marlene Schiappa, had said the demonstration was a protest against secularism “under the disguise of fighting discrimination”. More than 40% of Muslims said they had felt religious discrimination in France, according to a survey by Ifop earlier this month. Islam is the second biggest religion in France, which has the biggest Muslim minority in Western Europe. Last month, a member of Le Pen’s National Rally party fueled an ongoing debate about the position of Muslims and Muslim symbols in France by publicly telling a woman to remove her headscarf. Source

As you know, we’ve pulled back our troops quite a while ago, because I think it’s time for us not to be worried about other people’s borders. I want to worry about our borders. We’ve got plenty of borders to worry about.

I want to thank the President for the job they’ve done. Again, this has been thousands of years in the process, between borders, between these countries and other countries that we’re involved with, 7,000 miles away. So, we want to worry about our things.

We’re keeping the oil. We have the oil. The oil is secure. We left troops behind, only for the oil.

And I have to just finish by saying that the President and I have been — we’ve been very good friends. We’ve been friends for a long time, almost from day one. And we understand each other’s country. We understand where we’re coming from. I understand the problems that they’ve had, including many people from Turkey being killed in the area that we’re talking about. And he has to do something about that, also. It’s not a one-way street.

So, I just want to say it’s a great honor to have you both and thank you very much. Thank you.

PRESIDENT TRUMP: You, go ahead, please. Would you like to say something?

PRESIDENT ERDOĞAN: Thank you. (As interpreted.) Well, Mr. President, thank you. In a few moments, we shall be having a larger-scale press meeting, that’s why I don’t feel the need to come up with longer statements here.

PRESIDENT TRUMP: Okay, well, that was good. That’s good. It’s true. A lot of truth to that.

I will say, we’re also talking about a trade deal. We do, proportionately, very little trade with Turkey. They make great product. We make the greatest product in the world. And, frankly, we’re going to be expanding our trade relationship very significantly. We think we could be doing $100 billion with Turkey. And right now we’re doing about $20 billion. But we think that number should be easily $100 billion, which would be great for Turkey and good for us.

So, we’re going to be expanding. We have our people from Commerce here. That’s one of the meetings we’ll be having. And having that big relationship, I think, is a very good one. So, we think we can bring trade up very quickly to about $100 billion between our countries. Okay?

Q What do you do, Mr. President, about the S-400s, in terms of getting that trade deal?

Q Are you satisfied with the ISIS fighters that Turkey is keeping an eye on? Are you happy so far with the progress?

PRESIDENT TRUMP: Turkey is watching the ISIS fighters. When I became President, ISIS was all over the place. I had no idea to the extent. In fact, it was shown to me about a month ago. We came in. It was a mess. And we took over 100 percent of the caliphate.

And, last week, as you know, we killed its leader and its founder. And we’re very proud of that fact. And we’ve also knocked out number two. And we have our eye out on number three, who was supposed to become number one, but he’s running right now. He’s running for his life, but we have our sights right on him.

So, we are — we’re doing very well. ISIS is very much — very much a factor that’s different than it was when I took over. When I took over, thousands and thousands of ISIS fighters were all over. Now they’re mostly imprisoned.

Q Is there any way, Mr. President, that Turkey can possess both S-400s and F-35s? Or are those things mutually exclusive?

PRESIDENT TRUMP: Well, John, we’re going to be talking about that. So, we’ll — we’ll talk about it. We may report to you later on about that because we’re having a second meeting in a little while.

So, we’ll see you in a little while. We’re going to be having press conference of sorts in a little while. It’s an honor to have the President and Mrs. Erdoğan with us, and they’re highly respected in their country and in the region. And we’ll see what we can do. But the relationship that we’ve had is good.

And, you know, I’ve heard all the pundits — three, four, five weeks ago. They were against what I’ve — what I did. Now, all of a sudden, they’re saying, “Wow. That’s really working well. Why are we guarding other country’s borders? We want to take care of our country.” And they’re saying it really is surprising what’s happened. Plus, we have our troops out of there, and we’ll be bringing a lot of them back home. But again, we’re keeping the oil.

Thank you very much, everybody. Thank you.

PRESIDENT TRUMP: Thank you. No, I didn’t.

Q You didn’t watch any of it at all?

PRESIDENT TRUMP: I didn’t — I did not watch it.

Q Have you been briefed on what’s —

Q Have you been briefed?

Thank you very much, everybody. Thank you.

A civil engineer was found dead on Saturday after the structural framework of a mosque collapsed during construction the day before in Turkey’s southeastern province of Gaziantep. The body of 37-year-old Korkut Küçükcan was found following a 33-hour search and rescue effort on the scene of the collapse, news site Diken reported. “Hundreds of pounds of weight have been formed when a large amount of scaffolding material fell on top of him,” state run Anadolu news agency quoted Dr. Suat Zengin, who heads Gaziantep University Medical Faculty, as saying. The structural framework of the mosque under construction in Gaziantep’s Akkent neighbourhood collapsed at 3 p.m. local time on Friday. Küçükcan, who had entered the site to obtain measurements, was buried underneath the rubble. No other casualties have been reported. Source 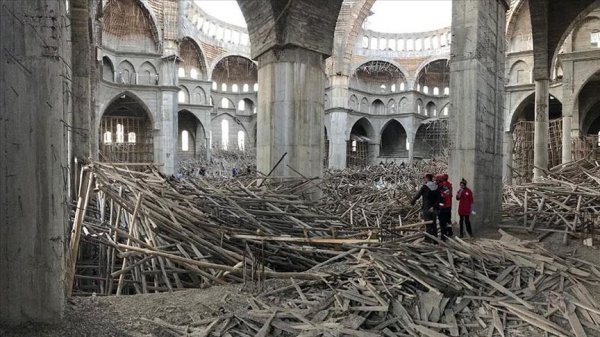