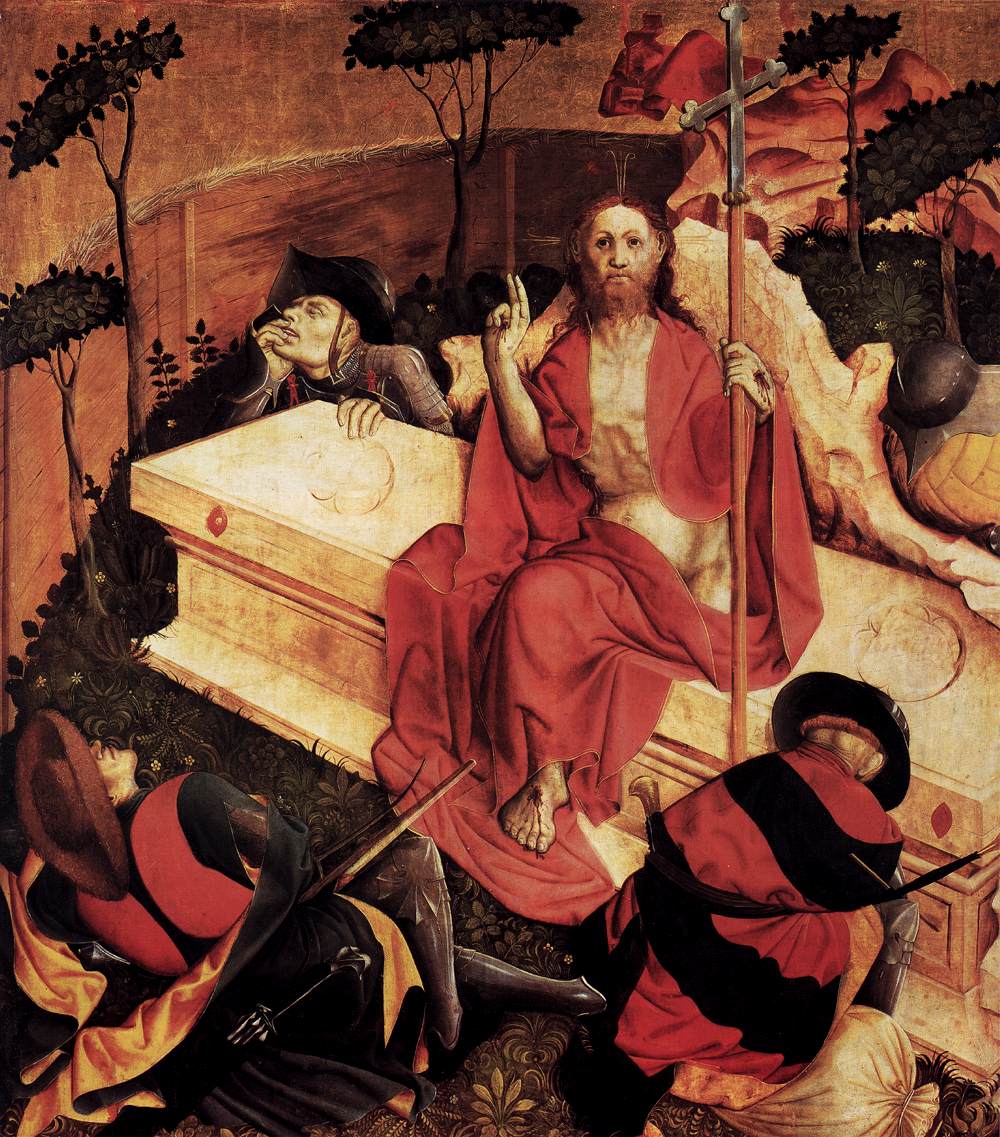 
St. Mark, 16. 1-7.
At that time, Mary Magdalen, and Mary the mother of James, and Salome bought sweet spices, that coming they might anoint Jesus. And very early in the morning, the first day of the week, they came to the sepulchre, the sun being now risen. And they said one to another: Who shall roll us back the stone from the door of the sepulchre? And looking, they saw the stone rolled back. For it was very great. And entering into the sepulchre, they saw a young man sitting on the right side, clothed with a white robe, and they were astonished. Who saith to them: Be not affrighted; ye seek Jesus of Nazareth, who was crucified: He is risen, He is not here; behold the place where they laid Him. But go, tell His disciples, and Peter, that He goeth before you into Galilee; there you shall see Him, as He told you.

The Apostles as the gospel saieth, were so dull of understanding,and incredulous in the doctrine of the resurrection of Christ, notwithstanding Christ of foretold it them diverse times,that even after he was risen & they were told so by some of the holy women that were at the sepulcher, & saw the stone removed, an Angel told them he was risen & bade them tell the disciples so; yet they deserved to be rebuked of Christ as St.Mark writeth, for their incredulity, and dullness because they would not believe them that saw he was risen, and Saint John saieth plainly that Saint Peter and he, and no doubt the rest of the Apostles, knew not that Christ was to rise again, from death,til Saint Peter and he hearing that Christ was risen,ran together to the Sepulcher, and saw it empty, and entered into it and saw the Sindon or shroud in one place of the Sepulcher,and the kerchief that was about his face in another, wrapped up: til this, I Say they knew not the Scriptures, that Christ was to rise again from death.

St Thomas was so grossly incredulous that notwithstanding all the rest of the disciples told him they had seen Christ,with his wounds upon him: he said unless I see it myself, & put my fingers into his wounds, and my hand into his side, I will not believe it.

This point of the resurrection of Christ being the main point, whereon all other points do hang, as a door hangeth upon his hinges; & is indeed the door, that open the way unto our resurrection, and consequently to everlasting life: Christ to confirm his disciples in the certainty thereof, and to open the sense of the Scripture unto them, as he did unto the two disciples, going to Emanus the very day of his resurrection,he appeared unto them oftentimes, he showed them his wounds, he ate & drank with them,he offered his wounds to Saint Thomas to be felt and handled,and conversed with them forty days, till in their sight and diverse others of his followers he ascended into heaven.

All this the Church doeth represent unto us upon Easter Eve, in a ceremony of hallowing a fire great, wax candle or Taper, with five grains of hallowed frankincense attached thereon, four of them in the nature of a square, and the fifth in the midst, signifying the five principal wounds of Christ, to wit in his hands, feet and side lighting it at Mass in the presence of Christ,and so continuing till Ascension Eve; which Candle being lighted every day at the holy Mass daily till Ascension Eve, aptly signifying the resurrection of Christ, and his conversation which his disciples till his Ascension, as also it refresheth our faith and putteth us in mind to walk with Christ like as men dead and buried to sin,and risen again to newness of life: and that our light of good life all the year after should so shine before men, that they may see our good works and glorify God, that hath done such great things for us.