“May the curate of my Son, Pope Pius IX never leave Rome again after 1859; may he, however, be steadfast and noble, may he fight with the weapons of faith and love. I will be at his side. May he be on his guard against Napoleon: he is two-faced, and when he wishes to make himself Pope as well as Emperor, God will soon draw back from him. He is the master-mind who, always wanting to ascend further, will fall on the sword he wished to use to force his people to be raised up. Our Lady of La Salette 19 Sept. 1846 (Published by Mélanie 1879)

Priests and religious orders will be hunted down, and made to die a cruel death. Our Lady of La Salette 19 Sept. 1846 (Published by Mélanie 1879)

Another one of my comments (see here) that the fearless defenders of free speech over at the remnant newspaper refused to approve: 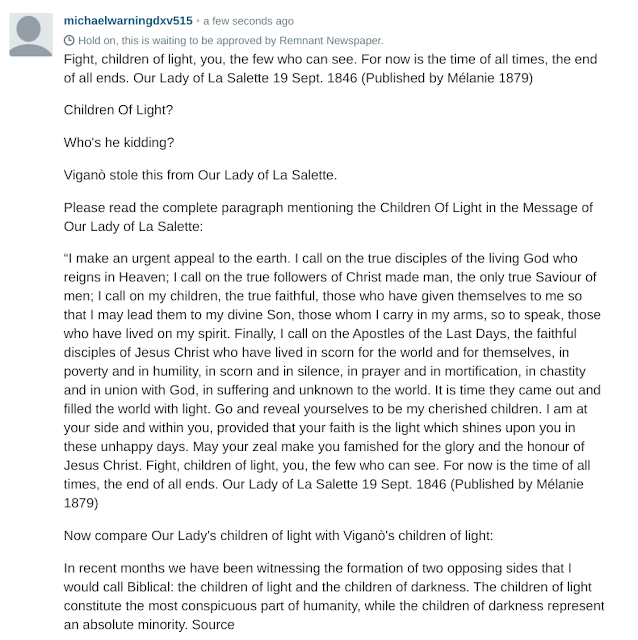 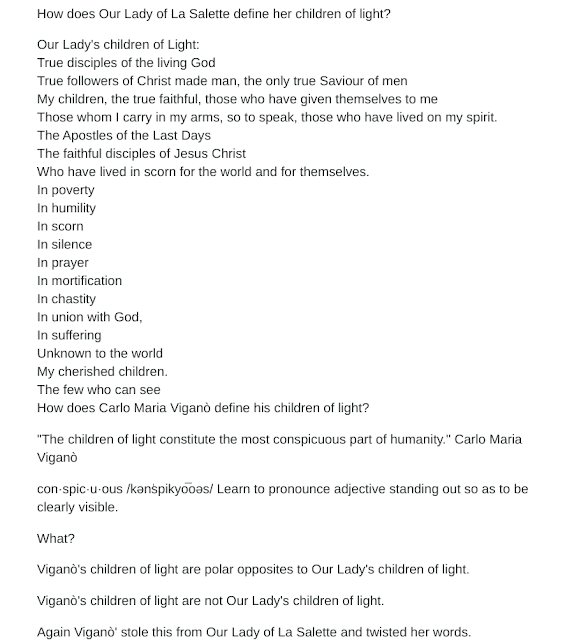 Can any of you Fearless Righteous Crusading Rad Trads tell me what is so offensive to Catholic ears in the comments I wanted to have posted on the Remnant article:  OPEN LETTER to DONALD TRUMP: Former U.S. Apostolic Nuncio, Archbishop Viganò, Stands with President Against the Mob

I'm just comparing the words of Viganò with Our Lady of La Salette.

Really what's so offensive to your pious ears?

If you weak-willed Catholics can't stand the simple opinion of a fellow Catholic how can you survive a real persecution?

Again the lot of you Rad Trads are frauds - you can't handle the truth....LOL!