RE-POST: Woman In Black? Mélanie Calvat Of La Salette Performed A Miracle On Victim Struck By Lightning In Acton, Indiana In June 1980 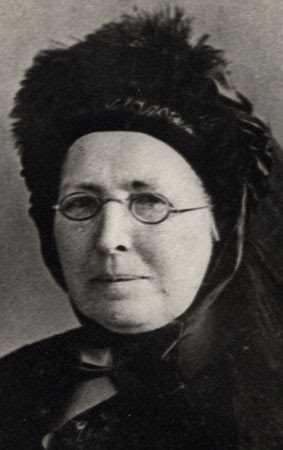 I always wondered about this episode of Unsolved Mysteries about a woman in a black dress who saved a man that was hit by lightning at the side of the road.

Description: Acton Campground is a historical site near Acton, Indiana. Founded in 1859, by a group of 14 Methodists, it was used as a meeting place for the Indianapolis District Camp-Meeting Association of the Methodist Episcopal Church.


History: Acton Campground is a former religous community and a local historical site. Motorcyclist Robert Davidson was riding through Acton, on his way to Indianapolis to visit his daughter when it began to rain. He pulled over to put on rain gear, and was struck by lightning. The strike was so powerful it blew both his boots off his feet. Shortly thereafter first responders appeared, and considered his case hopeless considering the high voltage his body had sustained. Paramedics were struggling to revive him when a mysterious woman in black, carrying a Bible, appeared. Paramedic Randy Neibert claims the ambulance lost power at this time, which being equipped with a dual battery system would be highly improbable. This "Lady in Black" said that she could save Robert's life. She struck him on the chest with her Bible, and spoke in tougues. A few moments later his vitals returned. After spending some time in a coma, Robert awoke with no apparent brain damage or other side effects. Some have wondered about the origins of this "Lady in Black" and her out-of-place dress, as after Robert's life signs returned she disappeared into the crowd and was not been seen again. She had dark features, causing some to believe she was a Native American; however, her long black dress was common to missionary women from 19th century Indiana. It is believed that she was a spirit connected to the Acton Campground

Background: Acton Campground was built in 1859 as a religious community and camping site until it burned down, first, in August 1864 after being used as a hospital for wounded Civil War troops, and then a second time in 1899 accidentally, and a final third time in 1905, which was caused by a spark from a passing train. Several artifacts left from it are displayed in a local museum, including a dress (pictured) that is believed to have been worn by Robert's savior. 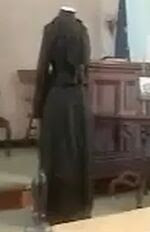 Methodists do not return from the dead to perform Miracles. But Catholics do.

OK so the first piece of the mystery is solved.

The woman in black dress, is not a Methodist, but a Catholic.

Again, Catholics return from the dead to perform miracles.

As for the bible?

Paramedics were struggling to revive him when a mysterious woman in black, carrying a Bible, appeared......She struck him on the chest with her Bible, and spoke in tongues

OK I get it, a bible thumper.

Mélanie has not been pictured carrying a bible. Maybe it was a Missal: The above is a pic of a  Antique French Latin 1800s missal/prayer book used during Mass.

OK, so that mystery is solved as well.

How about speaking in tongues?

She struck him on the chest with her Bible, and spoke in tongues.

So, yes, her words would have sounded like gibberish to the folks living in Indiana.

So that mystery is solved  as well.

Just 100 miles due west from Acton Indiana is this:


The La Salettes of the previous Province of Mary, Queen of Peace, had their roots in the La Salette Province of Poland. During the Second World War, Fr. Michael Kolbruch, M.S., the Provincial of the Missionaries of Our Lady of La Salette in Poland, fled to the United States from Janowska Concentration Camp during World War II.In 1941, he opened a minor seminary at Olivet, IL., in the diocese of Peoria. The former College of the Nazarene was converted into a large seminary for Polish missionary students, named La Salette Calvary Seminary. Polish-Americans associated the theme of Calvary with much of their lives in their old homeland. Considering the sufferings of Poland at that time, the new seminary was suitably named.

The Chapel and Seminary were dedicated on April 26, 1941. The first school year saw an enrollment of about 25 students of Polish heritage. Soon a Novitiate was founded for candidates to La Salette religious life on the property. The huge college plant offered considerable opportunity for the full expansion of the seminary. It included a large modern administration building with classrooms, another modern building for student quarters and twelve homes for the faculty. Also it had a new gymnasium, a power plant, a farm with barns and 120 acres of fertile land in central Illinois.

Eventually the property housed the minor seminary, novitiate, college and theologate.  After the war, the Iron Curtain enveloped Poland and there was very little communication allowed with anyone. The General Chapter of 1958 decided to attach the foundation in Olivet, IL., to the St. Louis Province. The Olivet District became a Vice-Province in 1967 and then a Province in 1982.

During this transition to a Province, the members of the Olivet district assumed the ministerial responsibilities of Polish speaking parishes in the Provinces of Manitoba and Ontario, Canada. Also a house was established in Milwaukee, Wisconsin and a Shrine was opened in 1967 in Twin Lakes, Wisconsin. Due to a decrease of vocations, the parishes were returned to the Dioceses and Olivet The entire property was sold. It was renamed the Notre Dame de La Salette Boys Academy.

Fr. Stanley Matuszewski, M.S. was director of the seminary and a teacher and also founded and edited the national monthly "Our Lady's Digest" from 1925 until his death in 1993. La Salette.org

Everything shut down in 1978, and by 1980, the La Salette Fathers left the grounds, dug up the bodies of all the fathers and brothers that were buried in the Cemetery and headed for Wisconsin, leaving Mélanie all alone.....so she headed east towards the sun...

MARIA OF THE CROSS,
Victim of Jesus nee MELANIE CALVAT,
Shepherdess of La Salette
"I protest highly against a different text, which people may dare publish after my death. I protest once more against the very false statements of all those who dare say and write First that I embroidered the Secret; second, against those who state that the Queen Mother did not say to transmit the Secret to all her people." Melanie