Meditations On The Funeral, And Burial Of Christ Our Lord Point III 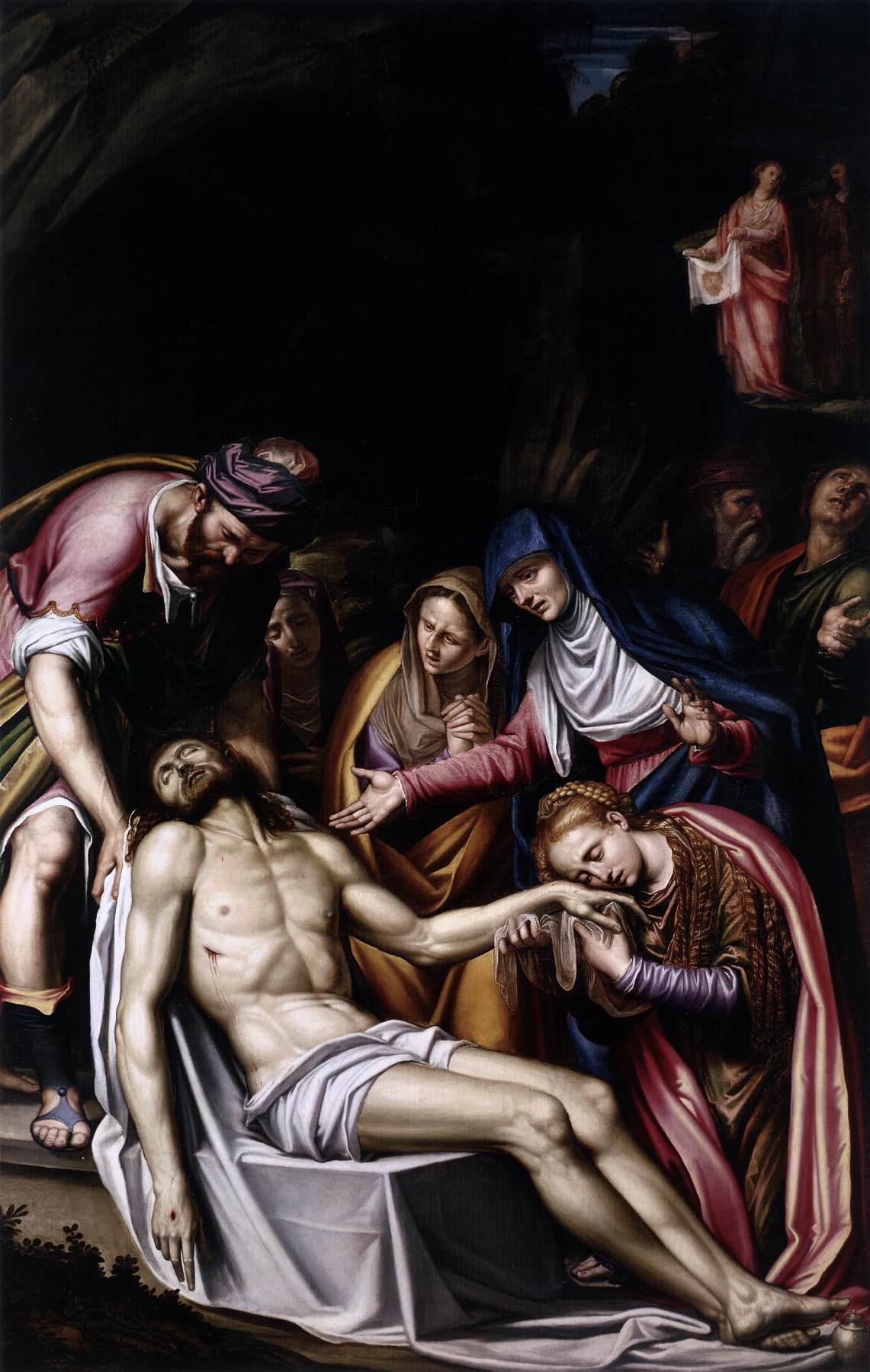 And there was in the place were he was crucified a garden, and in the garden a new monument belonging to Joseph, which he had hewed out in a rock, wherein no man yet had been laid, and he rolled a great stone to the door of the monument, and went his way.

1. First are to be pondered the properties of this Sepulcher, which Christ our Lord choose for himself taken of Joseph, who had hewed the same. The first property was, that it was in a Garden: because as the first Adam, sinned in the garden, and therein incurred the pain of death: so the second Adam would deplore this sin in another garden, and in another sepulcher, to deliver him from sin and death.

2. The second property is, that it was new: for this Lord being the new Adam, and a new man, was not to choose for his body, and other then a new sepulcher; like as when he entered into the world. he chose for his body the womb of the Virgin, which was a sepulcher, but yet new, wherein never any before had been laid, for that she was always a Virgin, an enclosed garden, and the lodging of Christ alone, in whome her spouse Joseph had no part, as this other Joseph had no part in this Sepulcher which he had hewed for himself.

3. The third property was, that it was cut out of a rock or mountain, hewed with the force and violence of iron tools: to signify, that Christ the living rock, hewed with the tools of many travails, was to be entombed therein, of whom the external Father said. Behold I will grave the graving thereof, and will dig many ditches therein, I will take which this divine stone received, the sins are pardoned wherewith the whole earth was infected.

O lively rock make me strong like a rock, hewn me with the chisel and strokes of travails, that I may become a sepulcher, wherein thou maist remain forever, Amen.

4. In this sepulcher they laid the most holy body of our Lord JESUS, he humbling himself who sits above the heavens, to be placed amongst the dead under the earth. They have put me in the lower lake (saith the prophet David) in the dark places, and in the shadow of death; the which this Lord ordained that he might deliver us by this his humiliation, from the inferior lake of hell, from the darkness of ignorances, and from the shadow of death, which is sin: for he buried with himself, all the vices of the world, to the end that in virtue of his death, they might remain forever dead and buried.

O glorious sepulcher of almighty God, who enclosed within thee him, who is the splendor of the eternal Father, the glory of the Angels, the honor of the world, the health, and life of mortal men, deliver me (o sacred sepulcher) from the obscure lake of hell, and from the mortal sleep of sin: admit me to enter into thee that I may die and be buried with him, who died, and was buried for me, Amen.

5. Consider lastly, how in this mystery is proposed unto us, that due preparation we are to make to receive the Blessed Sacrament: for as the consecration of the body and blood of Christ our Lord in different species of bread and wine, signifieth his death ( as hath been said) wherein the blood was separated fro the body: even so the sacred communion representeth his burial. For this blessed body with the five wounds, full of the merits which proceed from the myrrh of the same passion, wrapped as in a sindon under the veil of the species of bread, enters into our breast, as into a sepulcher; Which therefore ought to be as a garden, full of the odoriferous flowers of virtues: and new, by the renovation of our life, casting forth all the filth of our old life, and to become so clean, as if no idea thing had ever been laid therein. It ought also to be cut out of a rack for the great fortitude and constancy which it ought to have, in suffering the mortification and tribulations of this life; it ought also to be near unto the mount of Calvary: because it ought to be always exercised in thinking upon the afflictions of Christ crucified, and to imitate his excellent virtues.

6. By this preparation, it shall become a glorious sepulcher of JESUS Christ, who will delight to enter therein, and enrich it with the gifts of his grace; But after I have communicated, I am to roll a great stone against the door of this sepulcher, securely and strongly to keep the treasure hidden therein, shutting the door of my heart and of my senses, to kA that which may steal from me so precious a treasure, burying myself within ,myself, with the same Lord, which I have within me, to discourse with him, and to give him thanks for the graces and favors which he hath done me: for (as St. Gregory saith) contemplations is as the sepulcher of the spirit, wherein it is enclosed and hid with Christ in God.

O my soul, endeavor with Joseph of Arimathea, to anoint this Lord with the myrrh of most perfect mortifications, and to wrap him in a new and clean swindon with great purity of life; Give unto him thine own sepulcher, which is thy heart, hewn with great firmness, and so shalt thou become another Joseph, as much to say, he that increaseth, for that at every time thou dost communicate, thou shalt increase in virtue, until thou shalt come to dwell in that celestial city, signified by Arimathea, which is interpreted high, and is placed on high, clearly seeing the God of Gods; in his high tower of holy Sion, world without end, Amen.