Where's Jürgen? Timeline Of Belgian Manhunt For Rogue Soldier Jürgen Conings, 46, Stole Arsenal Of Weapons From Base And Went On The Lam

The hunt for Jürgen Conings: a timeline
A manhunt for career soldier Jürgen Conings (46) has been underway in Belgium since 17 May, when Conings allegedly stole an arsenal of deadly weapons from a military barracks and went on the lam. A note left behind for his girlfriend indicated that he “planned to join the resistance and may not survive,” and previous threats to Belgian virologist Marc Van Ranst – the man behind many of the calls related to Belgium’s coronavirus lockdown measures – were considered serious enough to warrant placing Van Ranst and his family in a safehouse under police protection. Conings was already being monitored by intelligence agencies because of his extreme right-wing political views, and was even on an official terrorist watchlist alongside members of IS. Because Conings’ military expertise is said to be camouflage and marksmanship, he is both incredibly difficult to find and incredibly dangerous. As the manhunt enters Day 8, here’s a look back at the timeline.
Tuesday, 18 May
Police formally announce their search for a then-unnamed professional soldier from the barracks of Peutie, at the time said to be armed with a rocket launcher, a machine gun and an ordinary pistol.“That person has apparently moved around,” Erik Cenens of the police said on May 18. “[He was] first in the Beringen region and then further north towards Pelt, the Netherlands and Maasland. We are trying to locate the man as exactly as possible to be able to arrest him.” Authorities found Conings’ car parked near the Hoge Kempen National Park in Limburg. An army bomb disposal unit inspected the vehicle before taking it away and media reports at the time that it was “booby-trapped” are later said to be premature, as authorities still await the results of an official analysis. 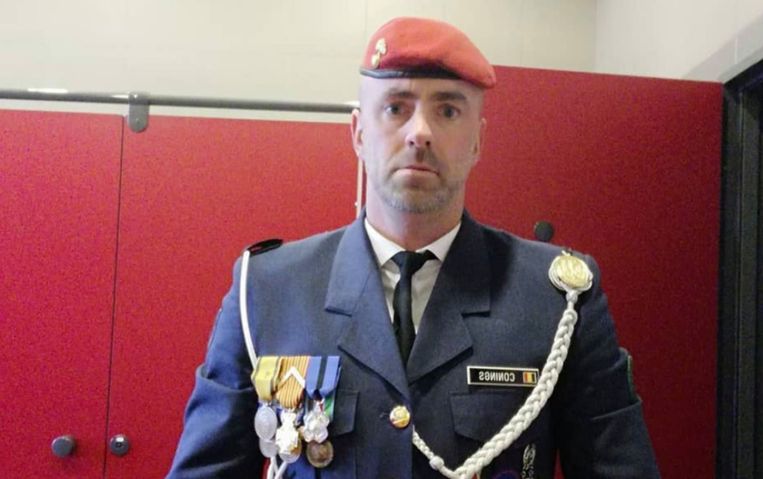 Wednesday, 19 May
Police close the Hoge Kempen National Park in Limburg, saying there are “strong indications” that Conings may be hiding there.Over the course of Wednesday afternoon, a whole column of police vehicles arrived at the National Park, as well as at least one armoured army vehicle. Helicopters circled over the park as the search entered hour 30, and more details emerged about Conings’ identity and past. It’s learned that Conings is actually listed as a PGE: a potentially violent extremist, described as “a person with extremist views who has an intention to use violence, but has not yet taken concrete steps to do so.” The threat level was raised to the highest level, indicating the existence of concrete plans and “a degree of imminence.”
Thursday, 20 May
As the search for Conings continues, a number of Mosques in the province of Limburg temporarily close their doors, dozens of parents keep their children home from school and both military and police increase their presence in the area. The search turned international when Dutch and German authorities announced they’re “on alert and ready.” Because the park where authorities suspect Conings is hiding is close to the Dutch and German borders, it’s considered possible that he’s trying to get to one of those countries. A separate police action took place in the Leuven sub-municipality of Wijgmaal, near where Van Ranst is said to have a residence: Het Laatste Nieuws reported that a helicopter circled above virologist Van Ranst’s apartment in Herent, and authorities later confirmed that Conings was “within range of his target” for up to two hours at some point. Around 350 policemen and soldiers are involved in the search, and it’s said that Jürgen Conings has enough ammunition “for a small war.” Some media report hearing gunshots, but police said these were not related to the search, and may have just been recreational hunters on adjacent land. Defense Minister Ludivine Dedonder (PS) is given extra police protection, but it is not said why. The E314 towards Lummen between Maasmechelen and Genk-East is closed, causing significant traffic jams along alternative regional routes.
Friday, 21 May
Finishing their sweep of the National Park Hoge Kempen in Limburg, authorities discover what they believe to have been the campsite of Jürgen Conings. “Radicalised people from extremist movements, whether or not equipped with rocket launchers, are not going to determine my life in the least,” said Van Ranst, who remained under police protection with his family. Defense Minister Dedonder and Prime Minister Alexander De Croo also spoke out, promising tough measures as critics questioned how a man on a terrorist watchlist was able to access the armory at a military barracks. After completing their search of the park, at least fifty vehicles from special units gathered in Maasmechelen and began moving in the direction of Lanklaar. Belgian troops were supported with units from Luxembourg and Germany, while Dutch special units guarded border crossings. Governor Jos Lantmeeters told press in Maasmechelen that while authorities were still searching the same 20-kilometre zone in the park, the perimeter was expanded and searches were being conducted throughout Belgium. The E314 was reopened, but the Hoge Kempen National Park remained closed to the public. 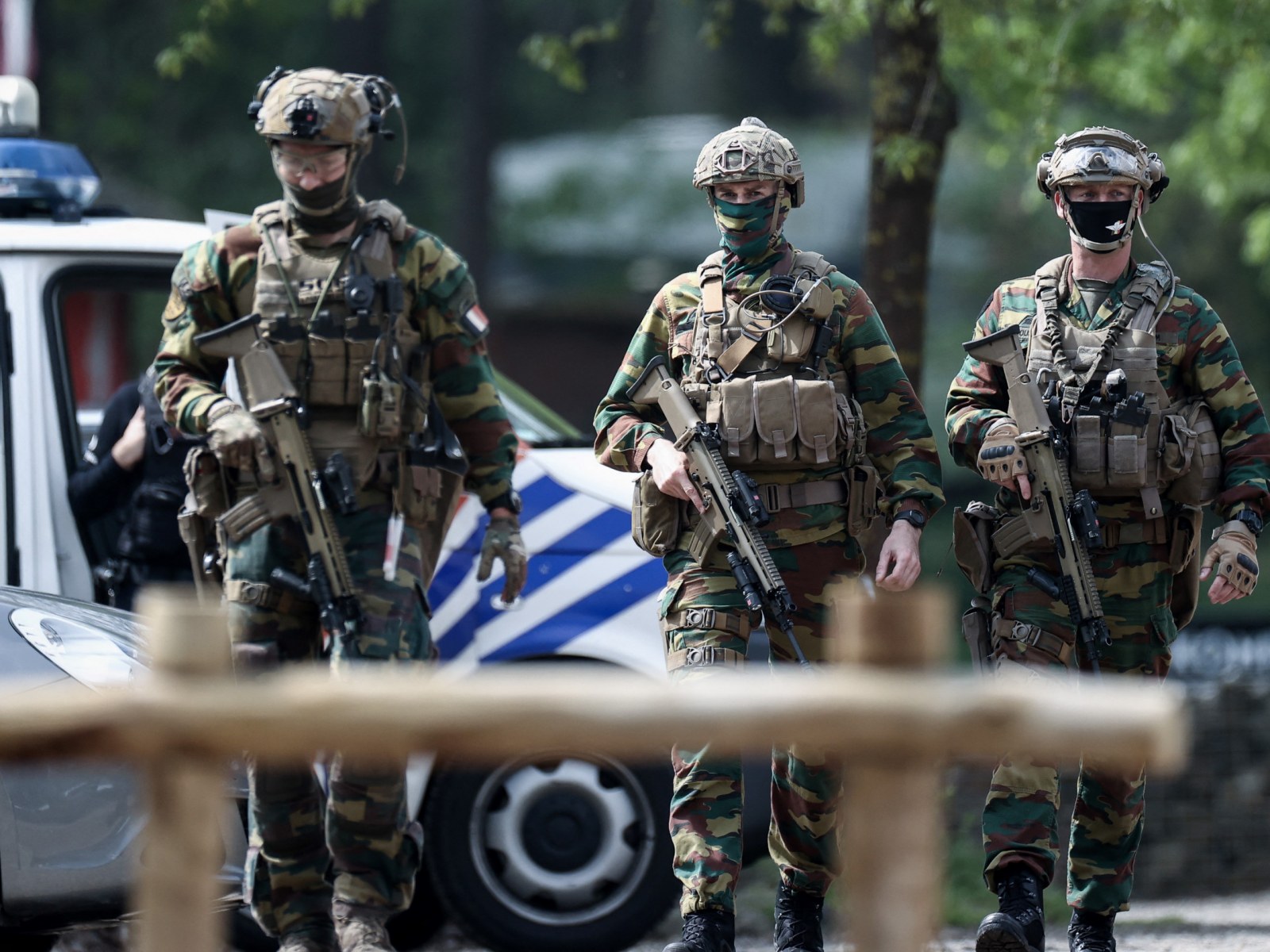 Saturday, 22 May
With no significant developments in the search for Conings after the discovery of his presumed camp site in the Hoge Kempen National Park, media reported more extensively on the fugitive’s past military experience and his current political views. Conings wrote two letters before disappearing: one to police, warning them of what he was about to do and making a threat against virologist Marc Van Ranst; and another to his partner. “I can’t live with the lies of people who decide how we should live,” he wrote in part. “The so-called political elite and now also the virologists decide how you and I should live. They sow hatred and frustration, worse than it already was. And no one rebels against that. If you say anything, you will be punished.” Van Ranst blamed Belgian far-wing political party Vlaams Belang for “actively creating an atmosphere against virologists.” Some media reported that Conings left his military medals on the graves of his parents in Peer. Ten house searches took place across Belgium, including in Peer, largely targeting people involved in far-right movements or known to have Nazi sympathies. Former military serviceman Tomas Boutens, who was sentenced to five years in prison back in 2014 for his membership in a neo-Nazi group, claimed his home was among those searched. A Facebook fan club formed for Conings and quickly garnered 20,000 members, and has continued to grow. Around 150 people gathered for a silent march of support in Maasmechelen. The fan club shared a “Team Jurgen” banner image they found online, calling for support for the fugitive. Horrified relatives of the deceased man that the banner was originally created for (meant to rally support for the man’s battle with lung cancer) begged them to stop. Police prepared to use a water cannon against people trying to break through closed forest roads to De Salamander, but the rain dispersed most of them. The search of Hoge Kempen National Park was stopped and the park was reopened. An international warrant for Congings was issued by Interpol.
Sunday, 23 May
Eleven soldiers who are being actively tracked by intelligence services for their radical far-right beliefs are removed from weapon depots and no longer given access to sensitive places and information, as Conings remains unfound. Police clarify that they intend to capture Conings alive, while also saying they will “act appropriately and respond in self-defense” should the situation call for it. Minister of the Interior Annelies Verlinden announced that “we have no indications of where he is.” Conings was officially designated a terrorist suspect, with provisional charges of “attempted murder and illegal possession of weapons in a terrorist context.” This allows the security forces extra powers when investigating the case, which they would not have in the case of a routine criminal. Police assume that Conings had a second target, in addition to virologist Marc Van Ranst, who remains under police protection in a safehouse.Steven Gelders, a former member of Special Forces, said that the search can’t go on much longer: “In his condition, things will sooner or later go wrong.”
Monday, 24 May
With Conings still at large, federal prosecutor Frédéric Van Leeuw issued an appeal via TV news for the fugitive to get in touch with someone he trusts in order to work out how to turn himself in peacefully. “We have been working very hard on this search in recent days,” said Van Leeuw. “A major search has been launched in the short term. The army and security services have been deployed to guarantee the safety of everyone, including that of Jürgen Conings.” Investigators are considering whether the clues that sent them to the Hoge Kempen National Park were deliberately placed to lead authorities in the wrong direction. Tuesday, 25 May
The manhunt continues. “We are now using all the means at our disposal to investigate the life of the suspect,” said Wenke Roggen of the federal public prosecutor’s office. “We are trying in every possible way to trace what he has done in the past few days and what he plans to do next. We want to locate him and find out what his actions are.” Investigators are considering whether Conings may have arranged a safehouse beforehand or taken shelter with associates. The Facebook fan club for Conings had nearly 50,000 members before Facebook shut it down. The group’s members questioned the power play in the search for Conings and the alleged difference between this manhunt and the one for the perpetrators of the 2015 and 2016 attacks in Paris and Brussels. Authorities reiterated their intent to take Conings alive. “We do not want there to be any misunderstanding about that, because that could provoke a bad reaction from Conings himself or from others,” the federal prosecutor said. Meanwhile, Belgium’s Chief of Defence emphasised that “Conings is no resistance fighter, hero or victim,” while adding that “mistakes were made” in terms of how Conings was able to access the armory at the barracks while being on a terrorist watchlist.
SOURCE
Email Post