Jewitches: Antichrist Will Be Born Of A Hebrew Nun, A False Virgin Who Will Communicate With The Old Serpent, The Master Of Impurity, His Father Will Be A Bishop.

“Nature is asking for vengeance because of man, and she trembles with dread at what must happen to the earth stained with crime. Tremble, earth, and you who proclaim yourselves as serving Jesus Christ and who, on the inside, only adore yourselves, tremble, for God will hand you over to His enemy, because the holy places are in a state of corruption. Many convents are no longer houses of God, but the grazing-grounds of Asmodeas and his like. It will be during this time that the Antichrist will be born of a Hebrew nun, a false virgin who will communicate with the old serpent, the master of impurity, his father will be B. At birth, he will spew out blasphemy; he will have teeth, in a word; he will be the devil incarnate. He will scream horribly, he will perform wonders; he will feed on nothing but impurity. He will have brothers who, although not devils incarnate like him, will be children of evil. At the age of twelve, they will draw attention upon themselves by the gallant victories they will have won; soon they will each lead armies, aided by the legions of hell. Our Lady of La Salette 19 Sept. 1846 (Published by Mélanie 1879)
“The seasons will be altered, the earth will produce nothing but bad fruit, the stars will lose their regular motion, and the moon will only reflect a faint reddish glow. Water and fire will give the earth's globe convulsions and terrible earthquakes which will swallow up mountains, cities, etc... Our Lady of La Salette 19 Sept. 1846 (Published by Mélanie 1879)
“Rome will lose the faith and become the seat of the Antichrist. Our Lady of La Salette 19 Sept. 1846 (Published by Mélanie 1879)
“The demons of the air together with the Antichrist will perform great wonders on earth and in the atmosphere, and men will become more and more perverted. God will take care of His faithful servants and men of good will. The Gospel will be preached everywhere, and all peoples of all nations will get to know the truth. Our Lady of La Salette 19 Sept. 1846 (Published by Mélanie 1879)
How some ‘Jewitches’ embrace both Judaism and witchcraft
(RNS) — In a scene from a recently released movie, three older women in a small room slowly walk clockwise around a table covered in candles, chanting curses softly. A scene from the latest “Macbeth” remake? Not exactly: It’s a moment from indie film “A Kaddish for Bernie Madoff,” a musical exploration of spirituality, Jewish identity and the Bernie Madoff case. Its creator, Alicia Jo Rabins, identifies as a Jewish artist and educator who incorporates elements of witchcraft into her practice of Judaism, an increasingly common, if still controversial, combination. In both the modern witchcraft and Jewish communities, people are bringing together magic — often called witchcraft — and religious ritual. The ways in which these two seemingly distinct practices merge is often highly personal, depending on heritage, education and spiritual calling. 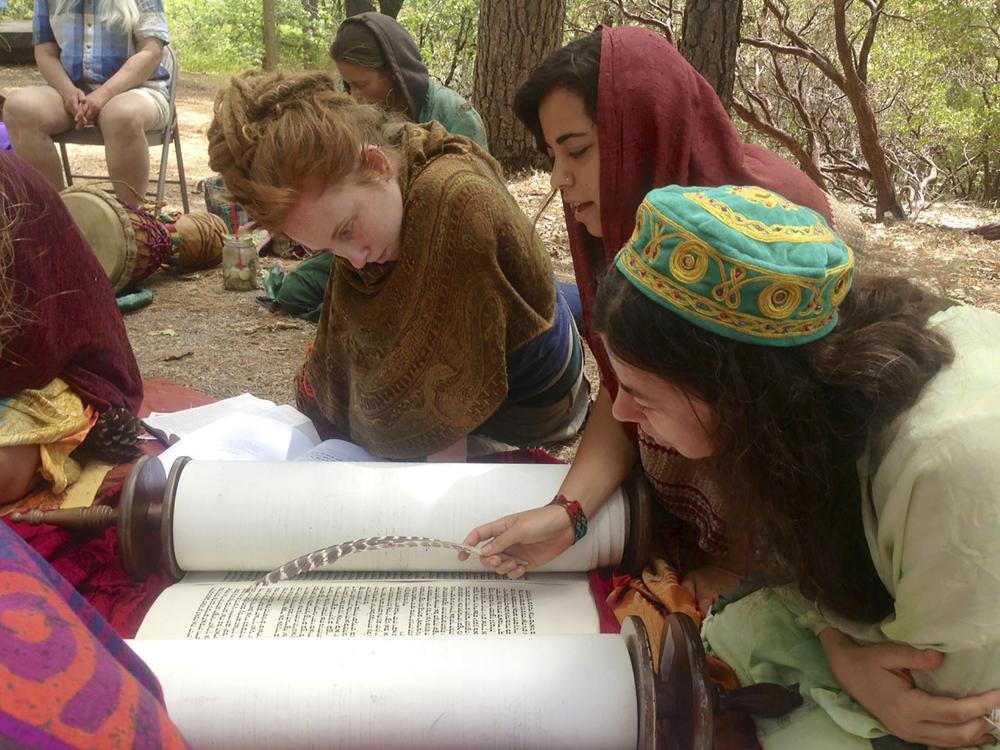 “The kinds of witchcraft that I practice draw on my training in Jewish ritual,” said Rabins, who holds the Torah in the above scene in the Madoff film. “I don’t see it as opposed to it, but as building on it.”Rabins, whose upbringing was not very religious, discovered “texts and traditions and the religious rules and laws and ways of living” as an adult and immersed herself in yeshiva. The more she studies and practices Judaism, she said, the more she also feels the pull of witchcraft or Jewish folk magic — practices she’s caught glimpses of in the edges of Scripture, as well as from Jewish cultures. “My relationship to Judaism is kind of like classically trained, and then with witchcraft, it feels more like I’m just kind of intuiting,” she said. Rabins admits the two practices seem contradictory, considering that at several points the Torah specifically forbids witchcraft. She interprets these passages as prohibitions against negative practices. The two also overlap in their observance of the natural world: Rabin is a member of a women’s group that gathers for “Rosh Hodesh,” or each new moon, a longstanding tradition in Judaism as well as in witchcraft. Source