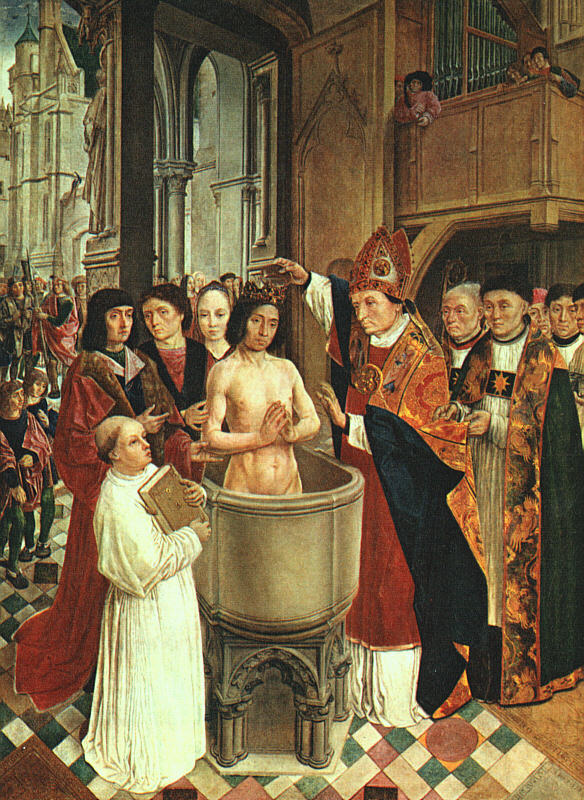 Master of Saint Gilles
Saint Remigius baptizes Clovis I
c. 1500
MEDITATIONS ON CHRISTIAN DOGMA.
TREATISE II.
7. GOD THE FATHER.
I. The distinction of the personalities within the Blessed Trinity depends on the interior relations which spring out of the action of the divine intelligence and will. There are various aspects hence arising, which do not belong to the Divine Essence as such, but are peculiar to one or other of the Persons and not common to all. These are the only differences between the Persons. They are not differences of substance or of the essential divine attributes ; so they mark, not a multiplication of the Godhead, but of the personalities in the one Godhead. The chief characteristic peculiarity of the First Person is Innascibility ; i.e. He is unbegotten, unborn, and does not in any way proceed from any other. This belongs to the Father alone ; for God the Son proceeds from God the Father, and God the Holy Ghost from the Father and Son jointly. The Divine Essence is in the Father without being communicated by any other ; and the infinite intelligence whose activity constitutes His relation to the Son is from no other source. On the other hand, the Divine Essence is in the Son and Holy Ghost by way of communication ; and Their relation ships to the Father and to one another are in Them by way of production (or procession). In view of this personal quality we speak of the Eternal Father, appropriating the term to Him as if it were predominantly His; although the Son and Holy Ghost are equally eternal. Adore profoundly this singular and supreme quality in God the Father. No other being has even a resemblance to it.
II. A second peculiarity constituting the First Person of the Blessed Trinity is His Paternity. It belongs to Him alone to be the eternal Father of God the Son. God the Holy Ghost does not share it with Him. This is the supreme glory of the Father, by reason of the infinite superiority of the Divine Son and the intrinsic action producing Him, over the external productions of divine action in creation. All the universe, including the angels, does not amount to an adequate reflection of the divine infinity, as does God the Son ; nor does it render infinite homage and love to its first principle, as the Son does. The divine paternity is the original and model paternity, the source and exemplar of all production of life, whether by God Himself or by His creatures. So St. Paul refers to "the Father of our Lord Jesus Christ, of whom all paternity in heaven and earth is named" (Eph. iii. 14, 15). So jealous is the Father of this prerogative that He would not allow the Divine Son coming on earth to have a father according to the flesh, but only a mother. He is the only Father, Jesus is the only Son. Rejoice that this paternity has given us a Redeemer, and a first-born of our race who is infinite. It is a glory to us as well as to the Father.
III. God the Father is also in a special way the first principle or source of all being, and it is attributed to Him by appropriation. The Son and Holy Ghost are, equally with the Father, the principle of creation; the Son is further, with the Father, the principle of the Holy Ghost : but the Father is alone the principle of the Son. St. Dionysius calls the Father the principle of the Divinity; not that He produces the Divinity, but because He communicates it to the Son and Holy Ghost. For these reasons we speak of the Father as if He were more especially the final end of all being, although the Son and Holy Ghost are equally our end and beatitude. All things must rise to the height of their source ; so all being cries aloud with St. Philip, " Lord, show us the Father and it is enough for us" (John xiv. 8). God is really your Father, by creation, by His love, and by communicating to you His own supernatural life by grace. Live as His son, and love Him as a son.
MEDITATIONS ON CHRISTIAN DOGMA BY THE RIGHT REV. JAMES BELLORD, D.D.
Email Post