MEDITATIONS ON CHRISTIAN DOGMA.TREATISE III. 9. THE CREATION OF THE ANGELS 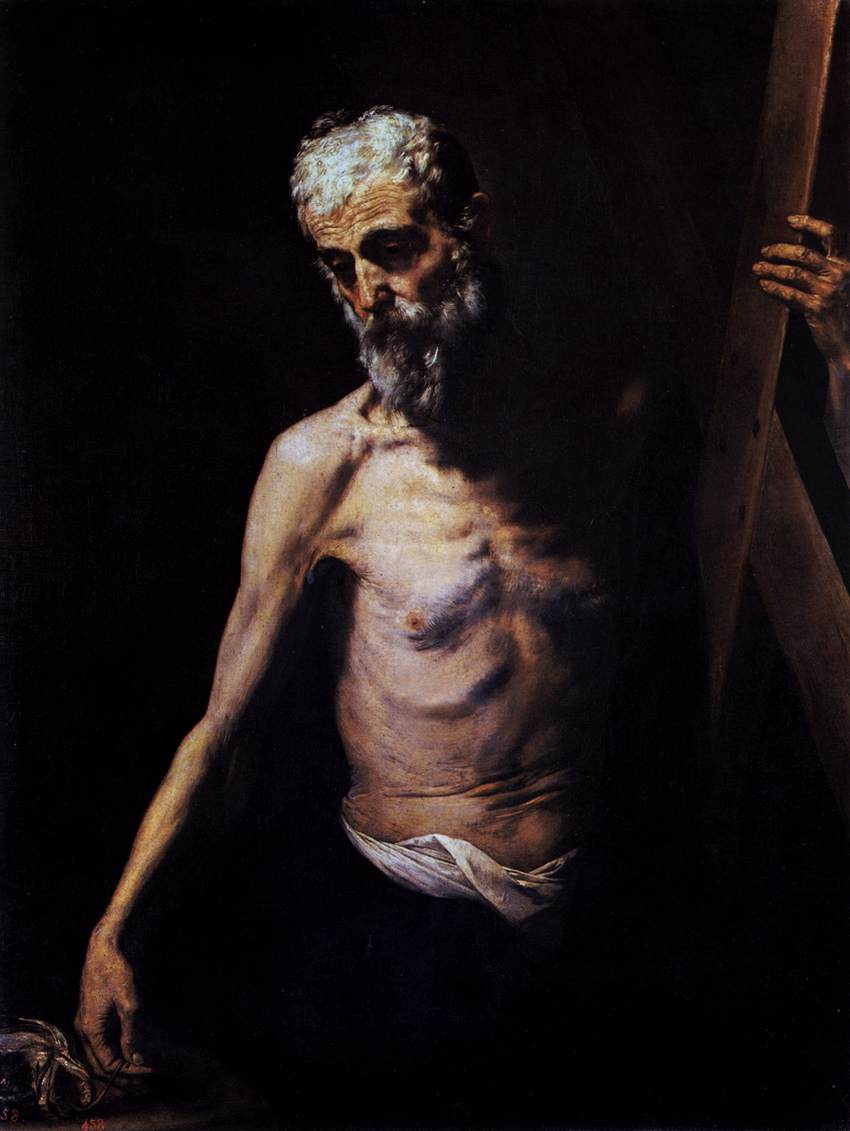 RIBERA, Jusepe de
St Andrew
1630-32
MEDITATIONS ON CHRISTIAN DOGMA.
TREATISE III.
9. THE CREATION OF THE ANGELS.
I. The angels were created by God in the beginning. They were not from all eternity ; they could not be, for none is eternal except the One Infinite, i.e. God. They were created therefore, and they had a beginning. We know that their creation took place before the sin of Adam, for it was a fallen angel that tempted him. Whether they were created in time, or outside of time and in eternity, we cannot say ; nor whether their creation was an instantaneous act of God or extended through successive periods ; nor whether these periods were moments or numberless millions of years. All we can do is to bear in mind, with out drawing any inferences, the enormous magnitude of the scale on which God carried out those works which we have been able to investigate. It may be, as some have thought, that the celestial spirits are a component part of the cosmic system, created contemporaneously with it, more or less, and exercising functions connected with it. Others think of them rather as belonging to a higher order, supramundane or supernatural ; as being of a different creation, the products of an anterior and generically distinct creative impulse emanating from the Divinity; as constituting in fact another universe of being, and only connected with this of ours by the duties assigned to some as messenger and guardian angels, and by the junction effected with us in our elevation to their supernatural plane. So, the creation of the angels would be intermediate in order and character between the infinite productive activity of God within His own being, and the external material production of our universe. Here are wondrous treasures of science, impenetrable to us now, but reserved for our knowledge in the kingdom of God.
II. Scripture gives us to understand that the angels were created in heaven. This heaven may be simply the supra- mundane state outside the domain of time and space; or it may imply a sort of preliminary admission to the ante chamber, so to speak, of the Divine Presence. They are supposed to have been created in the state of supernatural grace, with some degree of knowledge of God and communication with Him, but not such as would amount to the Beatific Vision and their final perfection. This last constitutes the state of reward and confirmation in grace, and is incompatible with the state of trial and its possibilities of failure. The angels, then, although not perfectly possessed of heaven, were in the supramundane world, they were in that sphere where their duties lay, and with grace they possessed the first stage of the heavenly life. You are in a similar state ; you have grace and divine charity ; you can enter into corporal union with Our Lord in the Holy Sacrament ; the Church, to which you belong, is called in the Gospel " the Kingdom of Heaven." Praise God for this.
III. The angels were created for the service of God, and for glory and happiness in His presence. God made them naturally adapted for this end,and for grace and sanctification, by the use of which they might merit the Beatific Vision. He gave them a great variety of endowments and powers, so that they might, by their activities, represent the divine attributes and glorify them. He also made them in vast numbers, so as to increase by multiplication the exhibition of His perfections. From the depths of His eternity God had desired to communicate happiness and glory to the angels ; He devised such a trial and such means as would most conduce to that object ; He foresaw the different results, and selected His own from among them for their rewards and glory. The greatness of God and His goodness merit that He should be adored and glorified by innumerable creatures ; and this service rendered to Him constitutes their perfection and happiness. You have been made for this noble object. Take care not to fall short of it. Every negligence towards God is so much loss to yourself.
MEDITATIONS ON CHRISTIAN DOGMA BY THE RIGHT REV. JAMES BELLORD, D.D
Email Post