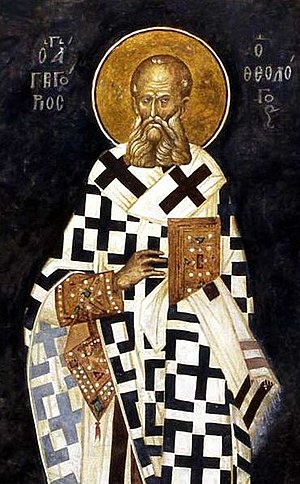 Gregory of Nazianzus presided over part of the Council
ARTICLE III.
Heresies of the Fourth Century
Of Apollinares.
75. We have now to speak of Apollinaris, who was condemned in the same Council of Constantinople. He was Bishop of Laodicea, and St. Jerome's master in sacred literature; but he broached another heresy, concerning the person of Jesus Christ. His principal error, as Noel Alexander tells us, on the authority of St. Epiphanius, St. Leo, St. Augustin, and Socrates (6), was, that he supposed the human nature of Jesus Christ only half human nature he supposed that Christ had no soul, but that, in place of one, the Word made flesh answered as a soul to his body. He softened down this doctrine a little after, for then he admitted that Christ was not without a soul altogether, for he possessed that part of the sensitive soul, with which we see and feel in common with all other sensitive beings ; but that he had not the reasoning part, or the mind, and the Word, he said, supplied that in the Person of Christ. This error is founded on the false philosophy of Plato, who wished to establish in man three substances, to wit the body, the soul, and the mind.
(6) Nat. t. 8, ar. 3, ex St. Epiph. Her. Fleury, I 18, n. 1, & seq.; Nat. 77; St. Leo, Ser. de Nat. Dom. ; , . - 37 ur 2 St - Au - t] e n er. c. 55; Socrat. . /. 12, c. 2. 2, c. 36?
76. The Apollinarists added three other errors : First, that the body of Christ, born of Mary, was consubstantial with the Divinity of the Word, and hence it followed that the Divinity of the Word was passible, and suffered, in reality, torments and death. Eranistes, an Apollinarist, contended that the Divine Nature suffered in the flesh, just as the soul suffers, conjoined with the body, in the sufferings of the body. But even in this illustration he was in error, because the body without the soul is not capable of suffering, and, when the body is hurt, it is the soul that suffers in reality, by the communication it has with the body ; so that, according to their system, the Divine Nature would suffer, if the flesh, supposed to be consubstantial to the Divinity, was hurt. The second error was, that the Divine Word did not take flesh from the Virgin, but brought it down from heaven, and, on that account, they called the Catholics, who believed that the body of Christ was taken from Mary, Homicolists, and accused them of establishing, not a Trinity, but a Quaternity, of Persons, because, besides the three Divine Persons, they admitted a fourth substance, entirely distinct, Christ-God, and Man. Thirdly The last error was, that the Divine substance of the Word was converted into flesh ; but these three errors, N. Alexander says, were not taught by Apollinaris, but by his disciples (7). Apollinaris erred also in the doctrine of the Trinity, by teaching that there were different degrees of dignity in the Trinity itself. He calls the Holy Ghost great, the Son greater, and the Father greatest. He, likewise, taught the errors of the Millenarians, and said that the Jewish rites ought to be resumed (8). Fleury and Orsi, like wise, give an account of his heresy (9).
(7) Nat. ibid.
(8) Nat. ibid. (11) St. Greg. Niss. Serm. de St.
(9) Fleury, t. 3, /. 17, n. 225 ; Orsi, Enhreiu. t: 7, I 16, n. 115.
77. The heresy of Apollinaris, especially that part of it referring to the Mystery of the Incarnation, was already condemned, in the year 362, by St. Athanasius, in the Council of Alexandria ; it was also condemned, in 373, by St. Damasus in the Roman Council, and the same year Bernini tells us that Apollinaris died, the laughing-stock of the people, even of the children (10). An author, quoted by St. Gregory of Nyssa (11), relates, that Apollinaris, being in his dotage, gave the book containing his doctrines to a lady of Antioch, a disciple of his, to keep for him ; this came to the knowledge of St. Ephraim the Syrian, who was then at Antioch, and he borrowed the book for a few days, from the lady : he took it home and pasted the leaves one to the other, so that nothing could open them, folded up the book, and sent it back again to the lady. Soon after this he had a Conference with Apollinaris, and they began to dispute about the doctrines of his book, in presence of a great many persons. Apollinaris, weakened in his intellect, on account of his great age, said that the answers to St. Ephraim s arguments would be all found in his book, and he sent to the lady for it ; but when he tried to open the first page he found it pasted up, and the whole book just like a log of wood ; he was so enraged that he dashed it violently to the ground and trampled on it, and ran out of the place as fast as ever he could, amid the laughter of the bystanders, who continued hooting after him as long as he was in sight. It is said that the, poor old man took it so much to heart, that he fell sick and died. Finally, this heresy was condemned in the Second General Council, (the first of Constantinople,) as appears in the Synodical letters : " !N"os pra3terea doctrinam DominicsB Incarnationis integram & perfectam tenemus, neque dispensationem carnis Christ! vel anima?, vel mentis expertem, vel imperfcctam esse asserimus; sed agnoscimus Verbum Dei ante secula omnino perfectum horninem in novissimis diebus pro nostra salute factum esse" (12).
(10) Bernin. t. 2, s. 4, c. 8.
(11) St. Greg. Niss. Serm. de St.
(12) N. Alex. t. S. c. 3, a. 1481. (14) St. Epip. Her. 79
Heresies of the Fourth Century
69 74. Heresy of Macedonius.
75 77. Of Apollinaris.
78. Of Elvidius.
79.Of Aetius.
80, 81. The Messalians.
82.The Priscillianists.
83. Jovinians.
84. Other Heretics.
85.Of Audeus, in particular.
THE HISTORY OF HERESIES, AND THEIR REFUTATION.ST. ALPHONSUS M. LIGUORI
Email Post