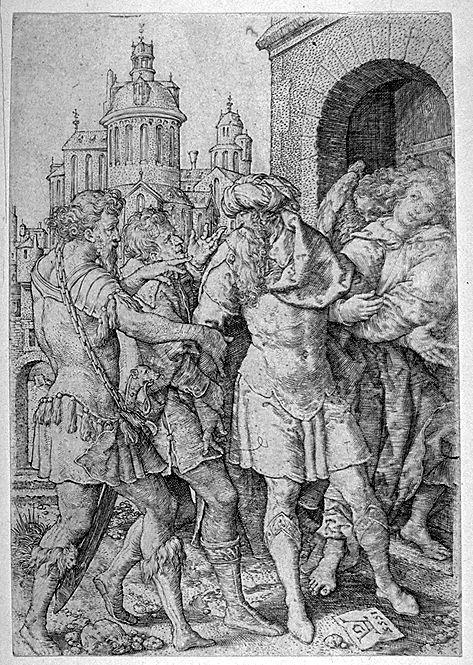 Lot prevents the Sodomites from raping the Angels
Heinrich Aldegrever
1555
the men of the city beset the house both young and old, all the people together. And they called Lot, and said to him: Where are the men that came in to thee at night? bring them out hither that we may know them: Lot went out to them, and shut the door after him, and said: Do not so, I beseech you, my brethren, do not commit this evil. I have two daughters who as yet have not known man: I will bring them out to you, and abuse you them as it shall please you, so that you do no evil to these men, because they are come in under the shadow of my roof. But they said: Get thee back thither. And again: Thou camest in, said they, as a stranger, was it to be a judge? therefore we will afflict thee more than them. And they pressed very violently upon Lot: and they were even at the point of breaking open the doors.  And behold the men put out their hand, and drew in Lot unto them, and shut the door: And them that were without, they struck with blindness from the least to the greatest, so that they could not find the door. Genesis 19
Everyone is wondering why the bizarre and frantic behavior exhibited by Voris and Niles?
The more I think about their attacks on the SSPX and faithful the more I realize that both Voris, Niles and the Church Militant Crew behave similarly to the wicked Sodomites who tried to break down Lot's door so that they could rape the Angles.
This behavior of the Sodomites is the same manic behavior exhibited in Voris, Niles and the rest of the Church Militant Crew.
Both Niles and Voris behave just like the Sodomites did.
I think you will agree with this analysis....