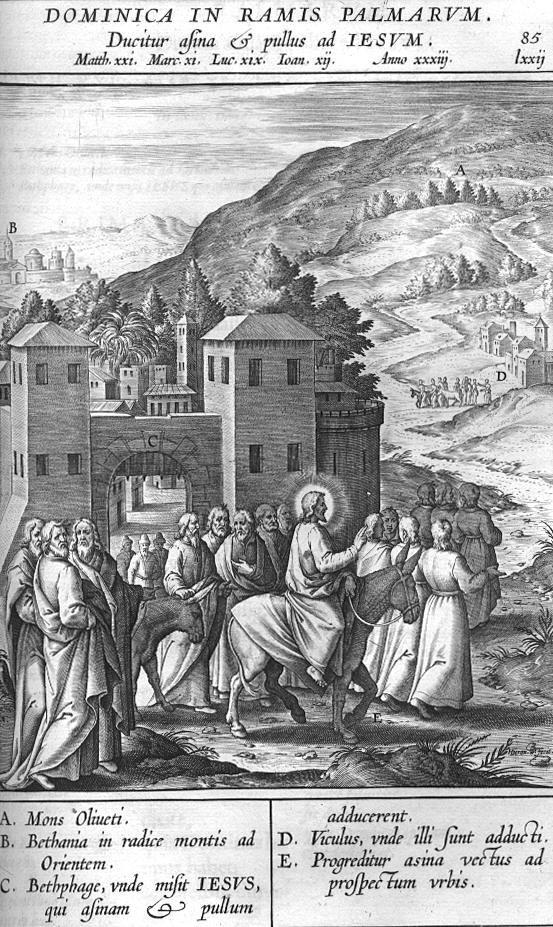 GOSPEL (Matt. 21:1-9)
At that time, And when they drew nigh to Jerusalem and were come to Bethphage, unto mount Olivet, then Jesus sent two disciples, Saying to them: "Go ye into the village that is over against you: and immediately you shall find an ass tied and a colt with her. Loose them and bring them to me. And if any man shall say anything to you, say ye that the Lord hath need of them. And forthwith he will let them go." Now all this was done that it might be fulfilled which was spoken by the prophet, saying: "Tell ye the daughter of Sion: 'Behold thy king cometh to thee, meek and sitting upon an ass and a colt, the foal of her that is used to the yoke.' " And the disciples going, did as Jesus commanded them. And they brought the ass and the colt and laid their garments upon them and made him sit thereon. And a very great multitude spread their garments in the way: and others cut boughs from the trees and strewed them in the way. And the multitudes that went before and that followed cried, saying: "Hosanna to the son of David: Blessed is he that cometh in the name of the Lord: Hosanna in the highest."
TUESDAY


God commanded the Jews that at that time of the year when they had gathered in all the fruits of the earth which was their harvest upon a certain day they should take the fruit if the fairest trees they could find & branches of palm & boughs of other trees, with thick leaves, and of the willow that groweth by the river side, and rejoice before their Lord God: peradventure these people that cut down boughs and branches of Palm and Olive and strewed in the way Christ rode to Jerusalem , for joy and congratulation, did borrow that ceremony of that of the Jews aforesaid, and meant nothing but to honor him, and salute him as their King.

But indeed by there preordination and intention of God, those boughs of Olive and Palm that the people cut down and strewn in the way of our Savior Christ riding to Jerusalem in pomp, though but upon an ass with a foal following her more then ever, he did before.

The apostles spreading their garments under him, and strewning his way with boughs, and spreading their garments in his way, and the acclamations of the people with Hosanna as aforesaid, all these were signs and signification of honor, victory, and triumph, and consequently of a fight; for no man, as Saint Paul saith, shall be crowned with victory, whereof Palm and Olive are the proper significations, unless he fight, the death & passion of Christ upon the cross, and all those afflictions contumelies and torments he suffered before, was his fight, his glorious resurrection; which being then to come the people did by this signs aforesaid, point at by the inspiration of God, though they knew it not, but only would have made him their king as is aforesaid, this mystery which to those people was then to come, and is come and past to us above sixteen hundred years ago, which we steadfastly believe & acknowledge to be the greatest benefit of God toward us that ever he did, we do yearly upon this Sunday celebrate with the godly Ceremony of hallowing a certain kind of green boughs, instead of palm and others instead of Olives, having none of them grown in our own country, carrying them in our hands in procession, and holding them in our hands in the time of Mass in the presence of Christ whom we then conceive to be going, towards Jerusalem, unto his death and passion, wherein he triumphed over sin death & hell; calling this Sunday in respect of this Ceremony of hallowed palms, Palm Sunday.

But how long did this honor and pomp of the people last? truly no longer then Christ came into Jerusalem.

There they all forsook him, and left him in the hands of his enemies, his very Apostles fled from him, and the people, which a little before cried out Hosanna in the highest, now cried out as fast crucify, crucify him; whereby Christ would have us learn, how short and inconstant the honors & favors of the world are, and to esteem them no more then he did but cast them under tour feet and trample upon them. rather then to loose the favor of God for them, as he did trample upon the boughs and garments which were laid in his way for his honor which doubtless he ordained to be so, for our instruction, as St. Gregory saith all the actions of Christ were: and more over to show, the vanity thereof: & that the deserve penance upon Ash Wednesday to begin lent with all, the priest taketh of the palms or boughs that were hallowed before upon Palm Sunday and carried in procession in sign of the honor, pomp & applause done to Christ by the people, & burneth them to ashes & then halloweth them, & sprinkleth them upon the peoples heads, and pronounceth these words Remember man, that thou art dust and into dust thou shalt return again.
A Plaine Path-way To Heaven Thomas Hill 1634