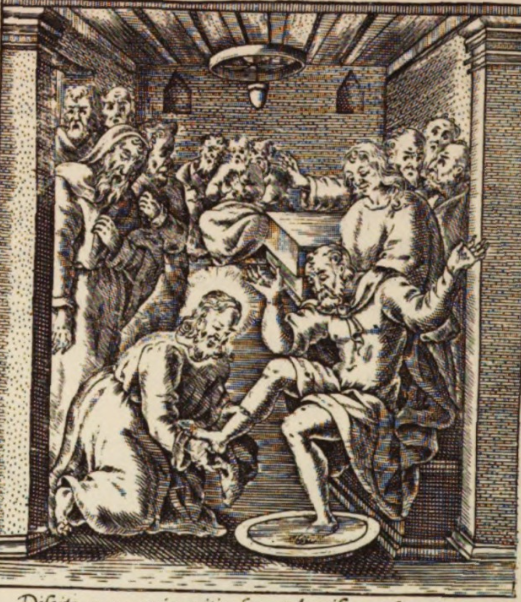 MONDAY MORNING
This day,when thou hast made the sign of the cross, with such preparation as shall hereafter be declared in the fourth chapter; thou hast to meditate upon our savior Christ washing of his Apostles feet: and upon the institution of the most blessed Sacrament of the Altar.
TEXT OF THE HOLY EVANGELIST
When the hour of supper was come, Our Savior Christ sat down at table, and his twelve Apostles with him. And he said unto them. I have had a great desire to eat this Passover with you, before my passion. And as they were eating, he said: verely I say unto you, that one of you shall betraie me. And they were exceeding sorrowful, and began every one of them to say unto him. Is it I, Lorde. Andhe anſwe- red, and ſaid. He that dippeth his hand with me in the diſhe, he ſhall betraie me. The ſonhe of mangoeth his waie, as it is written of him. But woe be to that man, by whom the ſonne of man is betraied. It had bene good for that man, if he had never been born. Then Judas that betrayed him, anſwered and ſaid. Is it I, master. And he said unto him, Thou hast said.
When ſupper was done, he ro- ſevp from the table, and put of his garmentes: and takinge a to- - Ioan. 13, E ij Meditationfor well, he girded him ſelfe with it. After that, he powred water into abaſyne, and tºm. to waſhe his diſciples feete, and to wype them with the towell, wherewith he was girded. Then he came to Simon Peter. who ſaid to him. Lord, doſt thou waſhe my feete? Ieſus anſwered, and ſaid vnto him: what I doe, thou knoweſt not now: but thou ſhalt knowe it he- reafter. Peter ſaid vnto him. Thou ſhalt neuer waſhe my feete. Ieſus anſwered him.If I waſhethee not, thou ſhalt hauenopart with me. Simon Peter ſaid vnto him. Lord, not onely my feete, but my han- des,and head alſo. Ieſus ſaid vn- to him. He that is waſhed, nee- deth not to waſhe, ſauinge onely his feete: but he is cleane euerie whit. And ye are cleane, but not all.
Email Post