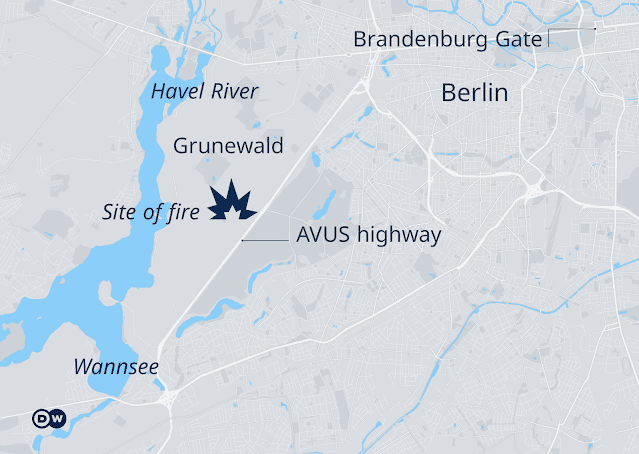 Explosions at an ammunition storage facility have caused a large wildfire in a forest in western Berlin. The site in Grunewald forest is used by German police to store and detonate unexploded ordnance, often from World War Two, which continues to be dug up during construction. Firefighters' efforts have been hampered by sporadic explosions which could be seen and heard miles away. Questions are being asked about why the facility is in a forest prone to fires. Some 140 firefighters are at the scene, and have set up a safety perimeter of 1,000m (3,280ft) because of the ongoing blasts. "We had explosion-like combustions and detonations. Debris was flying through the air, leading to a high danger to the life of the first responders, so they had to withdraw," Berlin fire brigade spokesman Thomas Kirstein told reporters at the scene. While the situation was "extremely extraordinary", he added, there was "no danger for Berliners". An army tank has been sent in to evacuate munitions at the storage facility, which is run by Berlin police's weapons disposal units. Remote-controlled de-mining robots and drones are also being used to help assess the situation, according to German media. On Thursday afternoon, the blaze was still not under control and had burned 15,000 square metres of the forest, authorities said. Munitions of all sizes are stored at the blast site, including fireworks. Videos shared online show how large some of the blasts were, and fireworks exploding in colour over the treetops. Source