A Black Muslim woman went berserk on the Las Vegas strip and drove her car up on the side walk at a high rate of speed mowing down pedestrians. The terror act occurred in front of the Paris hotel-casino and Bally's casino.

The vehicle she was driving had Oregon plates

The Muslim was staying in Vegas for a week.

The vehicle's windshield was completely smashed after running over the pedestrians and eventually stopped, she then barricaded herself in the car as witnesses tried to pull out of the car - she escaped and the Muslim fled on foot leaving her 3 year old child in the car.

The Police finally caught her on Flamingo Road and Koval.

The Muslim immigrant is now in custody. 
Horror on the Las Vegas Strip: Woman driver intentionally plows into crowd leaving one dead, six critical and 31 injured, then flees with a toddler in the back seat
Daily Mail Read More>>>>> 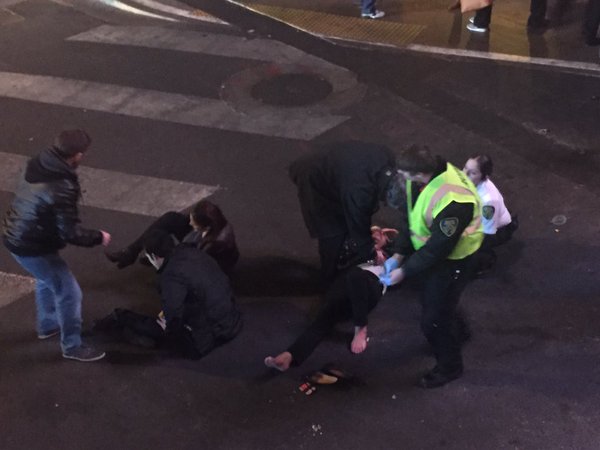 Police not comfortable releasing motive to the Public:


Sheriff: not comfortable disclosing what driver said about why she crashed into so many people on Las Vegas Strip #FoxNews
— Will Carr (@WillCarrFNC) December 21, 2015

Now the Cops claim Holloway was stressed out because there was no room in the inn? No place to lay her head? What? is this a reverse Christmas story? Please! The rampage took place at 6:30 PM no where near bed time for this woman & her kid. Not a legitimate reason to mow down over 40 pedestrians. The woman certainly was not suicidal - she deliberately wanted to hurt others and she used the closest weapon available - the gas pedal.  She took aim with her car at a sea of white faces and put the pedal down. Some way to celebrate Christmas. Oh wait MUSLIMS don't celebrate Christmas! Muslim prohibit Catholics from celebrating Christmas and the best way to prohibit a Catholic from celebrating Christmas is to murder them. And that's what this woman did.

Homeless mother plowed into Las Vegas crowd because she was 'stressed': Driver says she killed mom of three and injured dozens out of frustration as she tried to find a place to sleep
Daily Mail Read More>>>>>>>

Lakisha Holloway went to Texas and came back a changed woman:

Friends describe her before the trip to Texas:

LaShay Hardaway, Holloway's cousin, said: 'This is not like her. She's a very successful woman, she's always been successful, she's an overachiever.  'It's not her character. We are all trying to figure out what happened. Something very tragic must have taken place in her life because this is not her. 'This is not something she would ever do. We are so sorry for those families affected by this'. Sheria Agum, another of Holloway's cousins, said: 'She's sweet, she's a loving mother. She's a very strong mum'.

After the trip to Texas:

Miss Agum added that she last saw Holloway a month ago and after that she changed her number. Holloway's mother told her she had not heard from her since and she 'went off the radar'. Miss Agum said that Holloway had been staying in Texas until recently but upon her return to the West coast she noticed a change in her character. She said: 'I have never seen my cousin like that. Her whole attitude changed. She was having problems down there. When she came back she was different'.  Daily Mail Read More>>>>

Who influenced her in Texas? Muslim Male? Who turned Holloway?

Here is what she told cops:

She described a stressful period of time today where she was trying to rest/steep inside her vehicle with her daughter but kept getting run off by security of the properties she stopped at. She ended up on the strip, ?a place she did not want to be." She would not explain why she drove onto the sidewatk but remembered a body bouncing off Of her windshield, breaking it. Hotloway stated she was not under the influence of any drugs or alcohol.

Lombardo told reporters that Holloway was stoic and didn't appear to be distressed when she was arrested. He said she told a valet at a hotel to call 911 after she mowed down people on Las Vegas Boulevard.

So I guess running over people calmed the killer's nerves - so much so, that the cops thought she was a Stoic.

This is what Holloway is really saying "I was stressed so I decided to run over as many Whites as I could find - I thought that by running over and murdering white people would be a great stress reliever - I don't drink  alcohol to relieve stress, I murder instead...I guess, I didn't think things through - at least I got 3 squares and a cot now....."

Muslim or Racist or both? take your pick.