ROME – During a demonstration in Rome on Saturday expressing opposition to restrictive measures to combat the COVID-19 coronavirus, a gathering endorsed by Italian Archbishop Carlo Maria Viganò, participants displayed a papal flag with the image of Pope emeritus Benedict XVI and burned a picture of Pope Francis.

The demonstration, which took place in Rome’s Piazza della Bocca della Verità, was supported by the Italian political party Forza Nuova, a neo-fascist movement best known for its opposition to immigrants. During the rally, participants burned facemasks promoted as a means of combating the coronavirus, denouncing them as a “symbol of slavery.”

Several signs also expressed affection for US President Donald Trump, described by one as a leader who “loves Italy.” Source

Demonstrators displayed the Italian flag and signs reading “We are the people,” expressing opposition to what organizers called a “healthcare dictatorship.” In addition to political parties, sponsors included groups of taxi drivers and hotel operators, both groups whose incomes have suffered as a result of coronavirus restrictions.

According to local media reports, there was a significant presence of Catholic traditionalists and conservatives at the demonstration, including protesters who carried a version of the gold-and-white papal flag with an image of Benedict XVI. Another demonstrator who came dressed as a Catholic priest burned a photograph to Pope Francis to applause and cheers.

Demonstrators also burned a photograph of Beppe Grillo, a former Italian comic and founder of the “Five Star” movement, a center-left populist party that’s part of the current ruling coalition in Italy under Prime Minister Giuseppe Conte, which has supported the country’s policies to limit the spread of the virus.

According to the Italian newspaper La Stampa, one of the demonstrators exhibiting the image of Benedict XVI insisted that the emeritus pope had not validly resigned his office and remained the legitimate pope while showing passers-by video images of Pope Francis slapping the hand of a Chinese woman last New Year’s Eve and also playing portions of homilies delivered by Italian Father Alessandro Minutella, a Sicilian priest who was excommunicated for his unstinting opposition to both Pope Francis and his local bishop.

“Benedict XVI is the truth, and Bergoglio is a lie,” the demonstrator said, referring to the given name of Pope Francis.

“He’s part of the diabolical project behind this fraud of the coronavirus, which is nothing more than the flu,” the demonstrator told a reporter. “The coronavirus is the flu, not a pandemic like they say on TV.”

Organizers of the rally cited the support of Viganò, the former Vatican ambassador to the United States who rose to fame in 2018 by accusing Pope Francis of a cover-up with regard to ex-cardinal, and ex-priest, Theodore McCarrick, and demanding the pope’s resignation.

In the run-up to the event, Viganò sent a letter to organizers offering his support.

“The world health establishment, with the WHO in the lead role, has become a real multinational corporation with the aim of enriching its shareholders (pharmaceutical companies and so-called philanthropic foundations, and seeks to accomplish that by transforming citizens into chronically sick patients,” Viganò wrote.

“Pharmaceutical companies wants to make money by selling drugs and vaccines; if eliminating illnesses and producing effective drugs means reducing the number of sick people and thus profits, it’s logical that the drugs will be ineffective and the vaccines an instrument for spreading pathologies instead of eradicating them, and that’s what’s happening,” he wrote.

“How can we think that cures and therapies will be promoted if there are enormous financial incentives to prolong the pathology?”, Viganò asked, adding that a “cryptocurrency” project is currently underway that can capture not only one’s health information but also personal and banking data.

According to the La Stampa report, some organizers of Saturday’s rally believed that Viganò would be in attendance, but in the end he was not on hand. Source 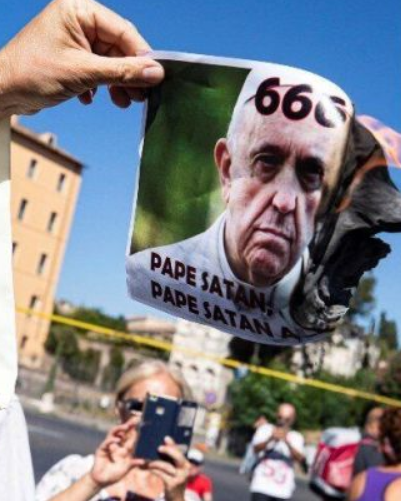