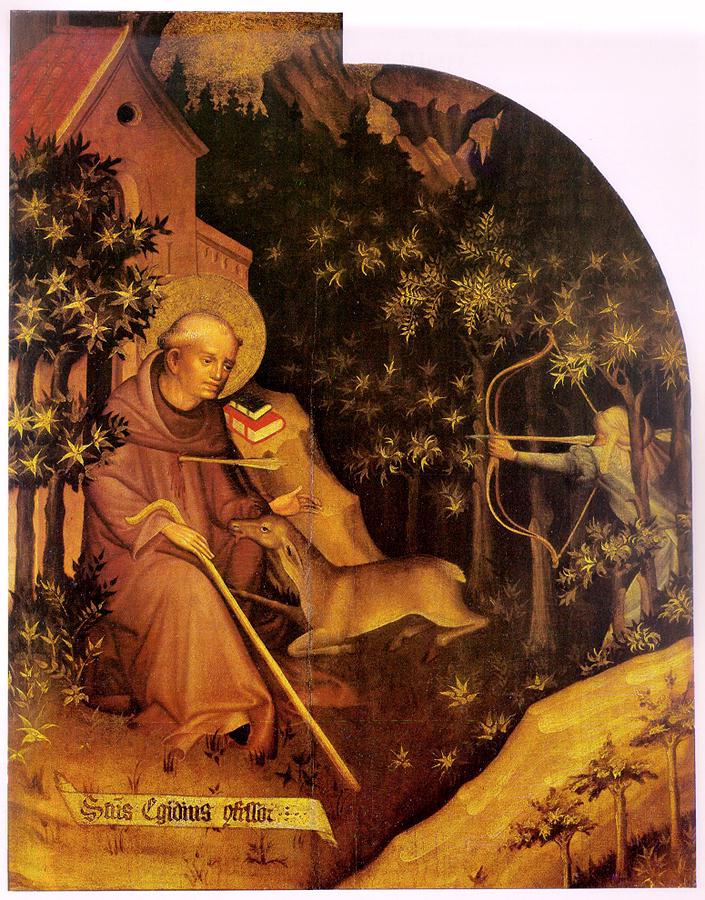 C.R. Aegidii Abbatis. This man was born in Athens of Greece, and of royal linage, who forsaking the world, and giving all his goods to the poor went to hide himself in France, where he lived many years in a wilderness near to the city of Arles, and was maintained only by the milk of a doe, that at certain times by Gods appointment came unto him, which doe being one day chased with the hounds of King Clodoueus, ran to this saint for succor, and thereby he was found out, and entreated by the said King to take upon him the government of a monastery, which in that place he would build. See Vincent. in spec. lib.23.cap.139. Anton. p.2. tit.13.cap.6. and others.

Father Abraham mart. This was an old poor simple man of Colchester burned for Lollardism and Wicklianism in the time of King Henry the sixth, almost 200 years past his particular opinions are not known nor recited by Fox, for which he was a Martyr. See cap.13.num.2.3.

2. And first of all is to be noted, that Fox doth not place in the beginning of this moth, any put to death under King Henry the eighth as hitherto he was wont, but only for the first three days setteth down three Lollards, or Wicklissians burned under King Henry the sixth. anno 1428. whose names he saith he found in a certain old Register, whereof the greater part could not be read. These three are Father Abraham a poor simple old man of Colchester, together with William White, and John Waddon Apostata Priests, for whose apprehension with divers others suspected of heresy and Lollardy (those be the words of the commission) he cited the said Kings letters to John Exceter keeper of the Castle of Colchester, and others, bearing date the sixth of July and sixth year of his reign. And if we consider the condition and circumstances of that time, we shall see it was when English men were much occupied in French wars; by occasion whereof, the infection of Lollards & Wicklissians did grow in divers parts of England, but especially in Norfolk, for so much signify the said letters of the King, commanding them to be sought out and punished. And albeit most of them, when they were apprehended, did abjure publicly their opinions, whereof John Fox recordeth a catalogue of almost a hundred, that did the same, and thereby escaped, (whom notwithstanding he accounted as good members of his Church:)  yet some few of them were burned for relapse afterward, especially these three here mentioned.

3. And as for F. Abraham, we do not know by Fox his relation here what he was, otherwise then a poor man; or whether he were a Jew, Lollard or Wicklissian, or why he was called Father, for that Fox his story saith no more of him, but that Father Abraham of Colchester was burned for like opinions, that the two Priests White & Waddon were.  Now his articles might be like, and yet far different in substance from those of the two Priests: but if they were the true articles of Lollards and Wiklissians, we have treated thereof before in the third Chapter of this book, where you may see them set down at large. Fox in this place talking of the whole agreement of his Wicklissians Saints, as well those that abjured as others, writeth thus: I find (saith he) in the registers such society and agreement of doctrine to have been amongst them, that almost in their assertions and articles there was no difference.

Note I pray you the word (almost) concerning their unity; remember also that in the margin of this place, Fox setteth down this note for their Antiquity against B. Bonner by name. Bonner (saith he) might see the Church here in this age, more then 40 years before he was born. And is not this a great antiquity (think you) joined with their almost unity in those days? But if he would confer their opinions with those of the Protestants of our days; what unity (think you) should he find among them? You may see them compared in the foresaid 3. Chapter of this book.