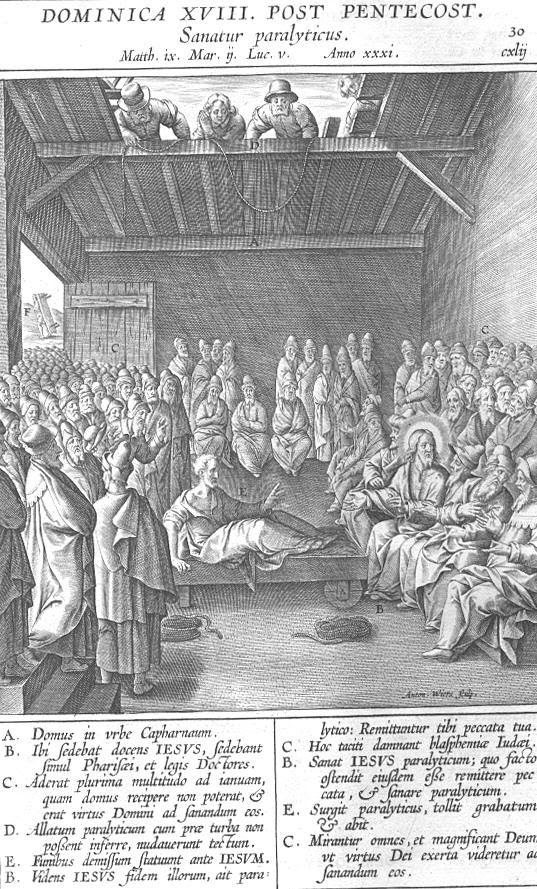 When the people of Israel, in a certain battle against the Philistines were overcome, they determined to fight with them again, and to carry with them the Ark of God, containing in it the Tables of the ten commandments, some of the Manna that had rained upon them in the wilderness, and the rod of Aaron, which being a dry dead stick, did by the power & ordinance of God, bud and beare leaves and fruit.


The occasion whereof was this : There was a controversy & tumult among the twelve Tribes of Israel, about the function of Priesthood, whether it should be proper, & peculiar to the tribe of Levi, or common to all.

There were three notable seditious persons amongst them, Chore, Dathan, and Abyron, who have great multitude after them, and they themselves rebelliously & presumptuously executed the office, offering sacrifice of incense, in the presence of great multitude of people, who conspired with them against Aaron to whom that Office did belong; and God was so much provoked therewith, that for punishment thereof, he made the earth open and swallow up alive those three, and fourteen thousand of the people that were of their faction.

A fearful example for Heretics, that presume to take upon them Priestly functions, without the authority of the Church, but rather in rebellion & contempt thereof.

To decide this controversy and to appease the people, as Moses his earnest supplication, God ordained, that there should be twelve rods, or dry dead sticks laid in the tabernacle upon a certain night, for every Tribe one, with the names of every Tribe written in his rod, and that Tribe whose rod did bud forth, and beare leaves in the morning, should have the Order of priesthood proper and peculiar unto them only: in the morning the rod of Aaron, who was of the Tribe of Levi, did bud forth & beare leaves, and fruit, and none but it; whereupon the office of Priesthood was confirmed upon the tribe of Levi, & God commanded this rod to be kept in the Tabernacle with the Manna, and Tables of Stone, as a monument thereof.

These were figures of things to come, as all things did happen to them of the old law in figure, a St. paul saith: the Manna a figure of the Blessed Sacrament of the Altar; the other two of Christian Reliques.

The place in the Temple where the Ark was kept, was called, Sancta Sanctorum, the holy of holies; God did oftentimes give Oracles in that place, and many victories they had in the wars at the presence thereof, yea as long as the people did serve God, their Adversaries could not stand in the presence thereof.

This ark the people of Israel carried with them into the wars, having a great confidence, that thereby God would give them the victory, they joined battle, they were overcome again, the priests & Levites that carried the Ark (for none could carry it but such for the greater reverence) put to the sword, and the Ark taken from them, and carried away.

The Prophet Samuel seeing the great slaughter & conquest the Philistines had taken of the Jews, made this Oration unto them: If you convert yourselves, said he, unto our Lord with all your heart, & take away your strange Gods from among you, and prepare your hearts to our Lord, and serve him alone, he will deliver you out of the hands of the Philistines.

The people did so, and drew water and poured it out upon the ground in the sight of the Lord, in token that as they poured out the water out of the vessels: so would they pour out of their hearts all their iniquities which being done, they set upon their enemies the Philistines, and got the victory.

We see how the adversaries of Catholic religion prevail of late years in divers kingdoms, how victorious they are & so confident in their success, that as that benemoth which Job speaketh of did not doubt but the great river Jordan would flow into his mouth; So they doubt not but to swallow up the Catholic Religion throughout all the world.

We on the other side trust in our Ark, our Holy Religion, our Holy of Holies the sacrifice and Sacrament of the Altar, our other holy Sacraments, our holy Invocation and patronage of Angels and Saints, our obedience to the chief Pastor of the universal Church, and the like; all which are so great comforts indeed of themselves that we may say with the Prophet David by way of exultation, and thanks giving to God, there is no Nation under the heavens hath their Gods so near approaching unto them, as we: