Rad Trad Leader Steve Skojec Haunted By Boogeyman Visions Of The 1950's.....Terrified That He & Wife Must Sleep In Separate Beds Just Like They Did In The 50's

What Rad Trads Do After Latin Mass

Just for the record I do not know any one who attends the Latin Mass who believes in their mind that they are living in the 1950's.

Accusing someone of living in the fifties because they attend the Latin Mass is ridiculous .

Before it was "you dress like little house on the prairie"

Why any one would label others with such nonsense is beyond me.

Really? how do you know that someone is living in the fifties in their mind during the Latin Mass?

Why would any one pay attention to such things about others during the Mass?

Steve thinks that you have to live in the 1950's in order to be a Rad Trad.

Steve is too cheap to pay for a psycho therapist (LOL) so Steve uses his Twitter followers as therapy.

Here is his Twitter rant about Rad Trads living in the fifties: 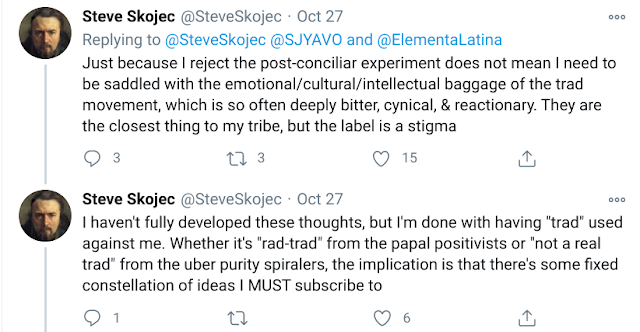 Is sensual Stevie concerned about his time spent in the embraces of his wife?

What it really comes down to is that Steve is afraid that he and his wife must sleep in separate beds just like they did in the 1950's.

Sensual Steve can not be separated  from the embraces of his wife for more than a day.

That's his real fear...to give up the nightly pleasures of his marital bed...