First Sunday After The Epiphany Which Is The Sunday Within The OCTAVES Thereof GOSPEL Luc.2.42 The Sunday Meditation 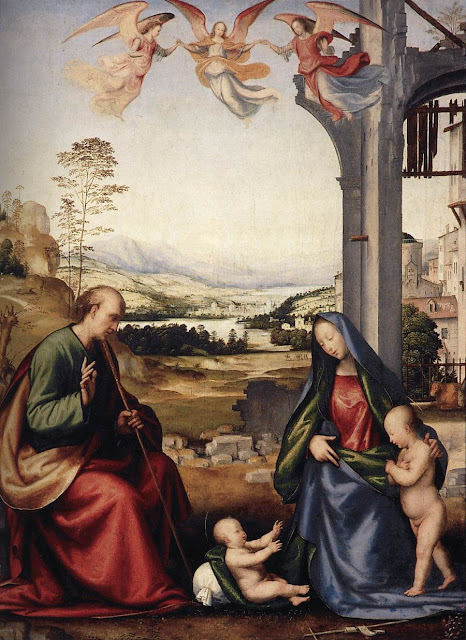 BARTOLOMEO, Fra
The Holy Family with St John the Baptist
1506-07
Luke 2. 42-52 GOSPEL
When Jesus was twelve years old, they going up into Jerusalem according to the custom of the feast, and having fulfilled the days, when they returned, the Child Jesus remained in Jerusalem, and His parents knew it not. And thinking that He was in the company, they came a day’s journey, and sought Him among His kinsfolk and acquaintance. And not finding Him, they returned into Jerusalem, seeking Him. And it came to pass that after three days they found Him in the Temple, sitting in the midst of the doctors, hearing them and asking them questions. And all that heard Him were astonished at His wisdom and His answers. And seeing Him they wondered. And His mother said to Him: Son, why hast Thou done so to us? Behold Thy father and I have sought Thee sorrowing. And He said to them: How is it that you sought Me? Did you not know that I must be about My Father’s business? And they understood not the word that He spoke unto them. And He went down with them and came to Nazareth, and was subject to them. And His mother kept all these words in her heart. And Jesus advanced in wisdom and age and grace with God and men.
Considerations for Sunday.
They going up to Jerusalem according to the Festival day.
The observation of the law of God, is said, sometimes to be hard sometimes easy; it is hard to them, that do not practice it: easy, to them that do. Custom maketh hard things easy.
David being armed with King Saul’s armor, to encounter with Golias, could not endure it, but put it off again, & the reason was, as he said himself, because he was not used to it. Likewise if we take pleasure in any thing, though never so hard or painful, it will make it easy; King David said, the keeping of Gods law, and commandments were sweeter ti him then honey or the honey comb: but this sweetness no man can come to taste but by the continual practice thereof. No man can make another understand perfectly how sweet delicate meats are to the taste, unless he taste them himself.
David, that said the commandments of God were sweeter then the honeycomb, and so described them by the best example that he could of honey or a honeycomb, then which nothing is more sweet: yet he thought that came much short of the matter, unless we tasted it ourselves; and therefore in another place he saith, taste and see how sweet our Lord is, to them that serve him, that is to say. Taste, and you shall know, and unless you tast it, you cannot know. To taste how sweet our Lord is, is to accustom, and inure ourselves to keep his commandments. To them that accustom themselves to break them, it is hard to keep them: but sin they swallow down like drink with ease. To them that accustom themselves to keep them, it is harsh to their souls to break them, unless they be much tempted, and provoked there unto; and haveing broken them, hard to digest it. This can custom, and delight do.
Our blessed lady and St. Joseph had a custom always without fail, of visiting the Temple in Jerusalem upon those days that were commanded: it grew sweet unto them, with use, and therefore they deserved having lost their little son Jesus, their jewell, and the jewell of all the world, to find him again in the Temple, which made it more sweet unto them ever after.
Email Post