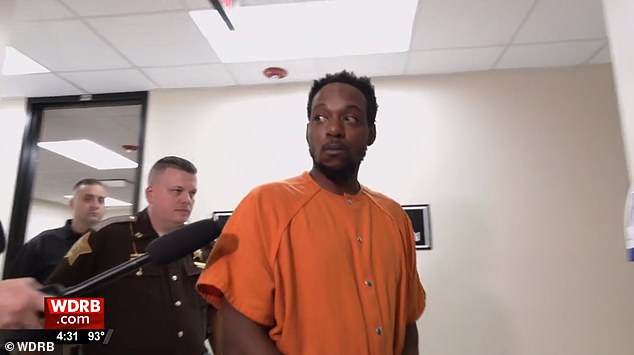 Indiana man, 36, is charged with DECAPITATING woman, 67, in her apartment: Missing body parts are discovered in suitcase at his home
A southern Indiana man has been charged with murder after firefighters found a woman's decapitated, mutilated body inside her burning apartment. Later, cops allegedly found her head in a suitcase and 'human digits' - such as fingers and toes - inside a plastic container at the home of suspect Brian Williams, according to a probable cause affidavit obtained by WDRB. Williams, 36, has been charged with murder, arson and misdemeanor theft in connection with the death of 67-year-old Melody Gambetty. Police said they do not believe Williams knew Gambetty and that the murder might have happened as the result of burglary attempt or home invasion, WDRB reported. Williams was ordered to be held without bond on Wednesday during his initial hearing in Clark County Circuit Court, during which a not guilty plea was entered on his behalf.Investigators said a fire crew responding Tuesday morning to a fire at Gambetty's apartment at a Clarksville apartment complex entered and found her body on the floor. She had been decapitated and other body parts had been removed. Clarksville Police Major Joe Demoss said during a news conference on Wednesday that Williams was quickly nailed down as a suspect after cops canvassed the area and retrieved surveillance video from nearby residents showing him with a suitcase. Williams had also allegedly been knocking on doors in the neighborhood to ask people for community service work, WDRB reported. Surveillance footage shows Williams entering the complex at 12.42pm, according to the probable cause affidavit. He then leaves carrying two suitcases to the victim's car at 3.51pm. Source
Email Post