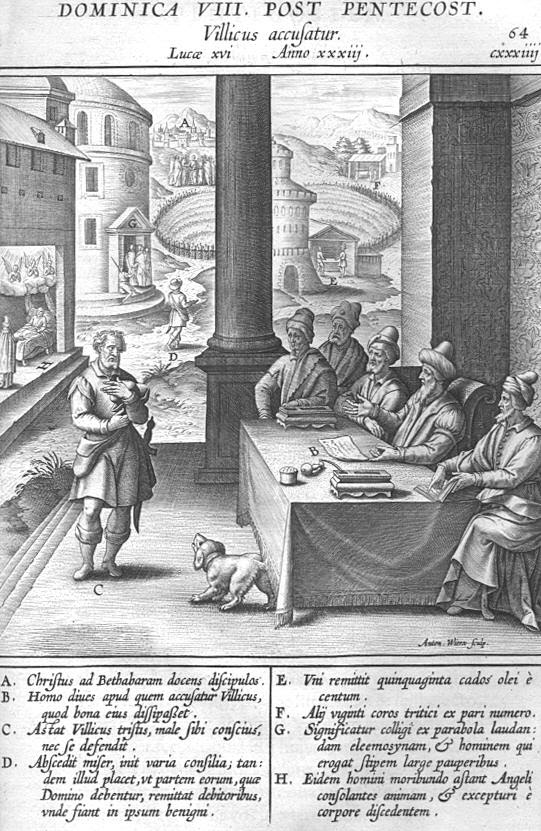 GOSPEL Luke 16: 1-9
At that time, Jesus spoke to His disciples this parable: "There was a certain rich man, who had a steward; and the same was accused unto him that he was wasting his goods. And he called him, and said unto him, 'What is this that I hear of thee? render the account of thy stewardship; for thou canst be no longer steward.' "And the steward said within himself, 'What shall I do, seeing that my lord taketh away the stewardship from me? I have not strength to dig; to beg I am ashamed. I am resolved what to do, that, when I am put out of the stewardship, they may receive me into their houses.' And calling to him each one of his lord's debtors, he said to the first, 'How much owest thou unto my lord?' And he said, 'A hundred measures of oil.' And he said unto him, 'Take thy bond, and sit down quickly and write fifty.' Then said he to another, 'And how much owest thou?' And he said, 'A hundred measures of wheat.' He saith unto him, 'Take thy bond, and write fourscore.' "And his lord commended the unrighteous steward because he had done wisely: for the sons of this world are for their own generation wiser than the sons of the light. And I say unto you, Make to yourselves friends by means of the mammon of unrighteousness; that, when it shall fail, they may receive you into the eternal tabernacles."


This example of this good Master, that would not give sentence upon his bad bailiff, till he had called him before him, and heard what he could say for himself, notwithstanding he was strongly accused, is not only an admonition for such as be Judges, by public authority, but for all others that do any way censure and judge of mens actions and words, upon report and information of others, in which case they must take heed, if they will avoid the foul sin of detraction, and temerarious or rash judgment, they be too credulous of other mens crimes, & misdemeanours, but suspended their opinion, and think the best till they hear the party himself, if it may be; if not, till they have such evident testimony as can hardly be contradicted, because he that doth quickly believe, doth condemn himself to be light of heart, which is a great fault in one that will play the Judge, especially in things that be odious, as is the defamation of our neighbor,which is against charity: as also it is dangerous to our selves to give judgment of others if we can choose, especially if we be guilty of the same, or the like, because, as St Paul sayth, in judging others we condemn our selves, with our own mouth: and if we do judge, it is good to judge the best, with a great deal of mildness & commiseration, that we may be so judged ourselves, for as the Scripture sayth, Judgment without mercy, to him that doth not mercy.

And commonly if any be given to make the worst of any mans faults, or proceed too peremptorily upon sleight suspicious jealousies, suggestions, surmises, and the like, to traduce & betray other mens fame and credit, especially behind their backs,it is a special sign they bear them evil will,which never speaketh well; or that they be evil themselves, and judge of others by themselves, and so consequently their accusation or testimony incompetent and suspicious to be false; and those that hear them & sooth them, are as much to blame as they, and sometimes more, drawing them on by applauding them, to speak more then they would.

The Emperor Nero being a most wicked man himself, or rather a monster in that kind, had this saying often in his mouth:All men would do as I do, if they had the power that I have, for they want no will. Thus would this wicked man say, measuring all others by himself, and so no doubt will wicked men do; but contrariwise those that are well given themselves,think well of all:Charity,as St.Paul sayth, thinketh the best, &c.

And when this good Master had found by due and mature examination, & his bailiffs own account, that he had wasted, and as it were decocted and boiled away his goods, he did not revile him and rail upon him,or deprave him as many would do, and call him villain, knave, their and the like, & that he would hang him, or cast him into prison till he had paid the uttermost farthing,but only said unto him in mild and mollifying terms: what is this I hear of thee? Give up thy accomptes, thou shalt no longer deal for me; he thought it was confusion enough for him to be convinced of his fault, that he had nothing to say for himself;he thought it was enough, to have him down upon the ground,he need not trample upon him; & indeed mildness, in that case would confound him more.

If this good Master, for our example, would not give this bailiff of iniquity,any foul words after he was heard, and convinced to have wasted and misspent his goods: how much less should we, unto any, upon light surmises and reports, in any criminal thing before the party be heard, and convinced.

If we will needs inveigh against the fault,or sin of any (as in some case we may to very good purpose) yet let us first say to him as this good Master did, what is this that I hear of thee? or I hear this and this of thee,  what can you say unto it? and when we have heard, what he can say, we know the better how to do it, otherwise we may easily wrong both him and ourselves.

Moreover we must consider, that to detract or take away a mans fame being of a higher degree then his goods, and harder it is to make restitution thereof, which yet must be done in fame, as well in goods.If therefore men make a conscience of the one, as every honest man doth, why not of the other?