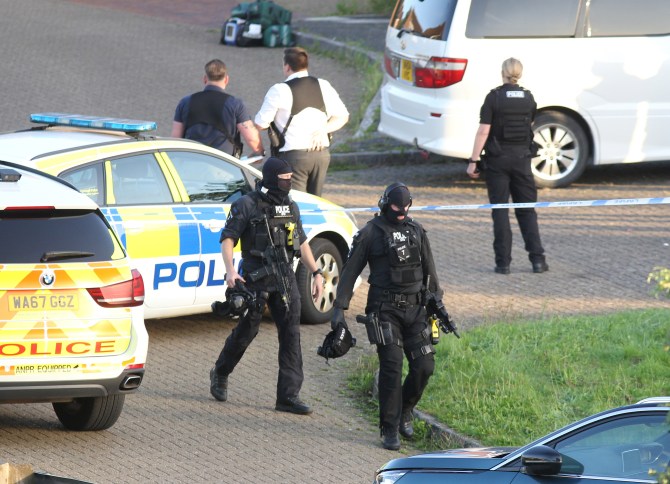 Three Mosques in Plymouth UK but Muslim population in Plymouth is less than 1%.
Media Lies
Police Lie
UK Government Lies
So this will be another coverup by the police and media and the Home Secretary and the body count will rise
They will call this a domestic disturbance even though the Muslim killed two innocent bystanders walking their dog. the media & government will claim that this man had mental problems and they will not release the names..
No mention of immigration status.
Oh and if it turns out to be a white bloke then he is probably a Convert to Islam and was radicalized in one of the three area Mosques and on-line. But the police will not mention this and the Home Secretary will hide this information from the public. By no means will the media show a picture of the man with full Muslim beard or wearing Muslim garb.
The oddity is that this shooting occurred on a Thursday and not on the usual Friday when Muslims like to attend the Mosque first and then go out and kill.
Oh and thanks to Jack Dorsey for banning me from Twitter in March for all my pointing out possible Muslim Terror attacks as they happened - like the stabbing in Wales in March which was committed by a  Uyghur Muslim refuge from China that was allowed into the UK. The Twitter Muslims ganged up on me and complained to Jack about that terror event that killed a teenage girl, and Twitter shut me down. That will show me! That will stop all the Muslim Terror Attacks! LOL!
If Muslim Terror Attacks are not mentioned on Twitter then they DIDN'T happen!
Plymouth shooting updates: Police confirm several dead and critical incident declared
Police have declared a critical incident after a shooting killed a number of people and injured several others. The incident started just after 6pm in the Keyham area of Plymouth and at least three air ambulances landed in North Prospect this evening. Eyewitnesses told Plymouth Live they could hear "loud bangs" and "gun shots". Several police officers and paramedics are at the scene and roads in the area have been cordoned off.A Devon and Cornwall Police statement was released at 9.15pm. It read: "Police were called to a serious firearms incident in Biddick Drive in the Keyham area of Plymouth at around 6.10pm today. Officers are ambulance staff attended. "There have been a number of fatalities at the scene and several other casualties are receiving treatment. A critical incident has been declared." Source 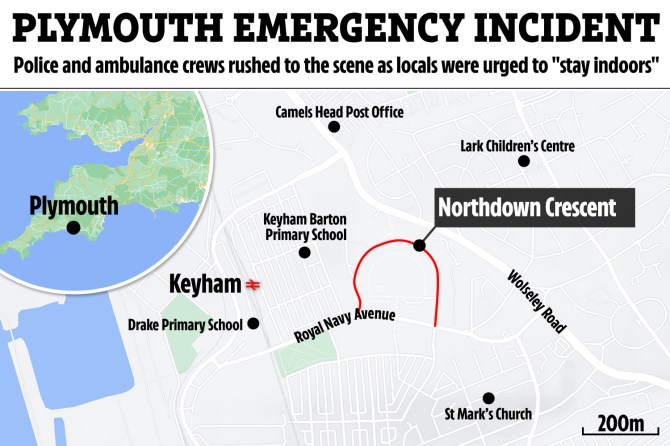 GUN RAMPAGE Plymouth shooting – Rampaging gunman kills five before being shot dead as terrified locals told to stay inside
A GUNMAN shot dead five people before being shot dead in Plymouth tonight - as an MP warned of a "grim day for our city". Armed cops and at least four air ambulances flooded the Keyham suburb after locals said they heard "gunshots" shortly after 6pm. Police have confirmed that there have been multiple fatalities, but it is not believed to be terror related at this time according to Sky News. It is understood that five people have been killed by the gunman in the bloody rampage this evening. The shooter is also believed to have died, but it is not clear if it was self-inflicted or by armed police officers. Sharron Turner, 57, who lives nearby said that a gunman had “kicked in” the front door of a semi-detached house and shot a young mother and her daughter, who was aged about five. She told the Times that the man was dressed in black and grey, armed with a semi-automatic weapon. After the attack the gunman escaped through a park behind the house and shot two dog walkers. Sharron added: “We heard a number of loud bangs which I said sounded like gunshots. "Then he ran into the park and there were further shots. I heard someone say he had shot his brother." Robert Pinkerton aged 54, said he was on Henderson Place , when he heard a loud bang. He told PlymouthLive that he turned a corner before bumping into the gunman, and "swerved" when he saw the gun. Robert added that he spotted a man tending to an injured woman in the doorway of a hairdressers. 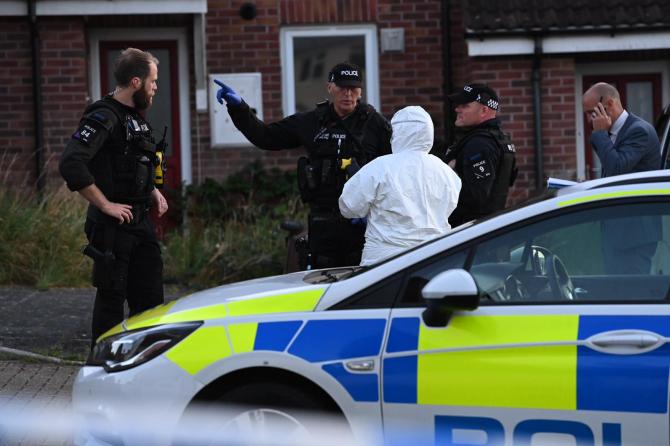 A spokesman for Devon and Cornwall Police said: "Police were called to a serious firearms incident in Biddick Drive, in the Keyham area of Plymouth at around 6.10pm today. "Officers and ambulance staff attended. There have been a number of fatalities at the scene and several other casualties are receiving treatment. "A critical incident has been declared. The area has been cordoned off and police believe the situation is contained. "Road closures are in place so please avoid the area. We are appealing to the public not to speculate or share pictures of the scene on social media or anywhere else. "We will provide more information on log number 768 of 12/08/21 as soon as we can." Footage circulating online appeared to show a bloodied victim on the ground surrounded by armed police. In one video posted to social media an armed officer can be heard telling members of the public to "walk away" from the scene. Police dogs are also on scene searching the area within the cordon, with the emergency response appearing to centre on North Down Crescent near a school and kids' playground.
'GRIM DAY'
Local MPs have described the situation s "very serious", adding that it is a "grim day" for their community. Luke Pollard MP said: "There looks to be a very serious situation happening in Keyham. Please can everyone stay safe, stay indoors and follow police advice. "Awaiting confirmation of number of victims but this looks like a very grim day for our city and our community. "I know a lot of people are worried whether the shooting is now over. I’ve spoken with the police again and to confirm it is now over but some victims are still being treated. "Please stay safe tonight, hug loved ones and keep the victims in your thoughts." Johnny Mercer MP added: "I am aware of a serious and tragic incident unfolding in Plymouth. 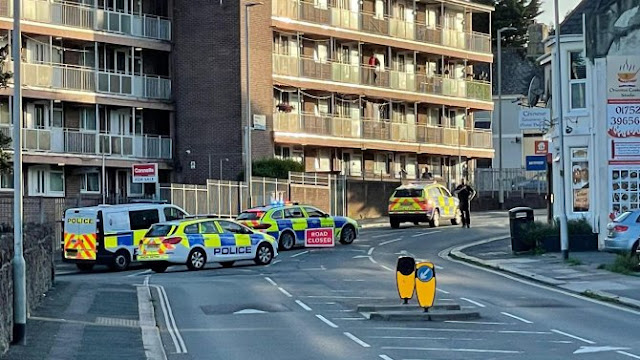 "The incident is not terror related, and neither is the suspect on the run in Plymouth. Remain calm. "It is for the Police to confirm further details. Do not repost chatter or gossip; work with them. We have the best cops in the land." It was the first "active shooter" rampage seen in the UK for 11 years since cabbie Derrick Bird murdered 12 people in Cumbria in June 2010. Home Secretary Priti Patel said: "The incident in Plymouth is shocking and my thoughts are with those affected. I have spoken to the Chief Constable and offered my full support. "I urge everyone to remain calm, follow police advice and allow our emergency services to get on with their jobs." South Western Ambulance spokesman said: "We were called at 18:12 to an ongoing incident in Plymouth. "We responded to the incident with a significant number of resources, including Hazardous Area Response Teams (HART), multiple ambulances, air ambulances, multiple doctors and senior paramedics." Source 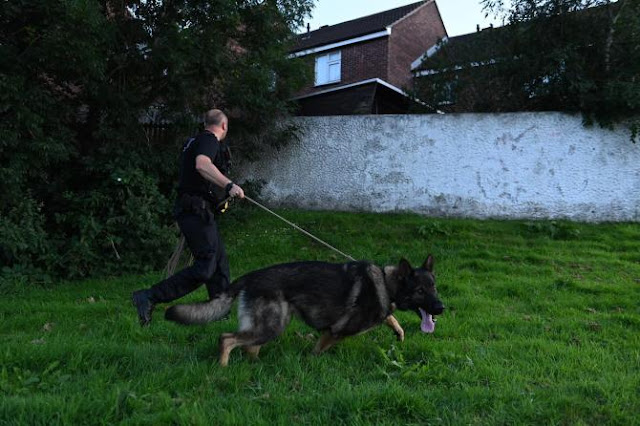