MEDITATIONS ON CHRISTIAN DOGMA. TREATISE II. THE BLESSED TRINITY. 2. THE KNOWLEDGE AND LOVE OF THE TRINITY. 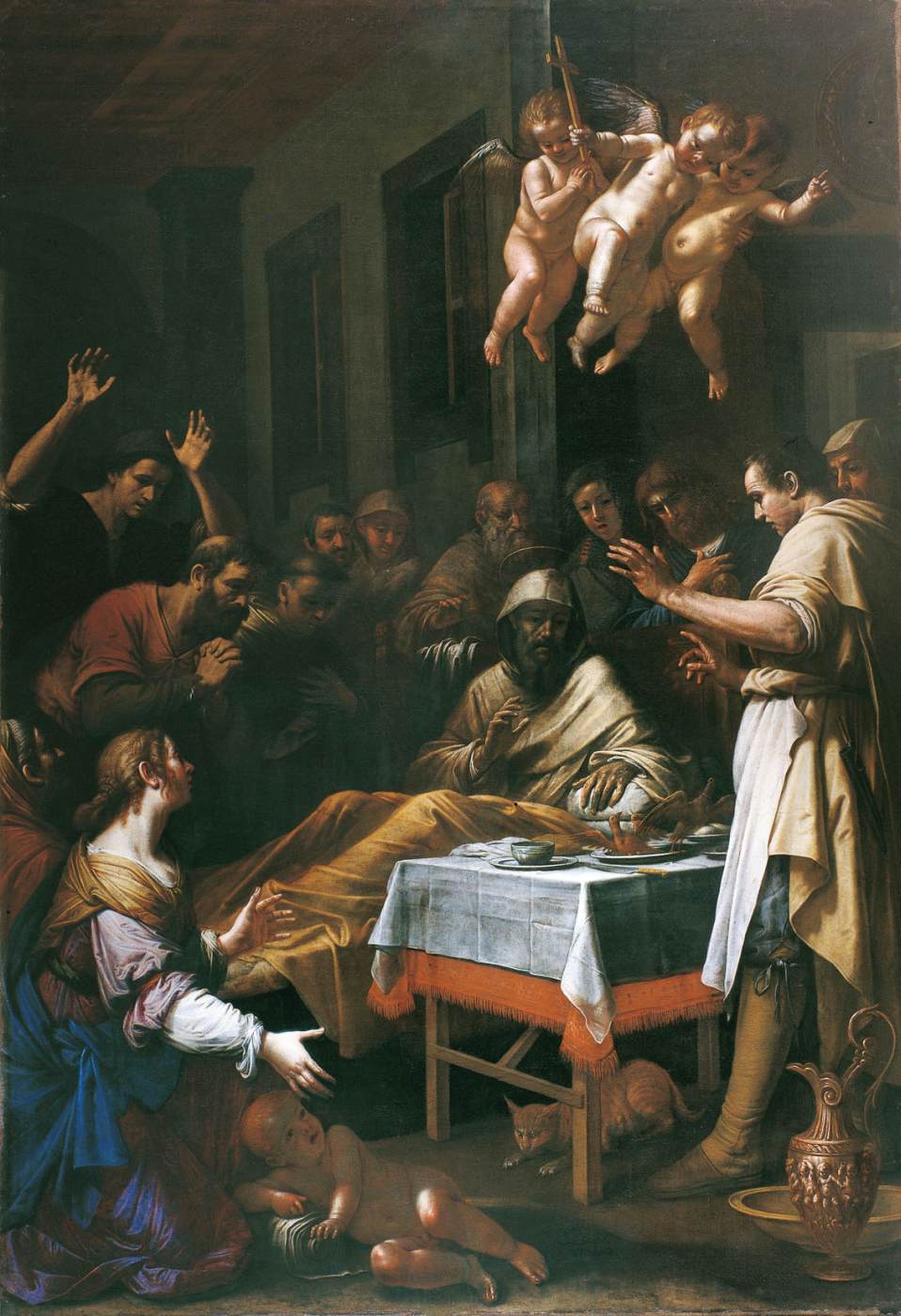 BALASSI, Mario
St Nicholas of Tolentino
Resuscitates the Birds
1648
MEDITATIONS ON CHRISTIAN DOGMA.
TREATISE II. THE BLESSED TRINITY.
2. THE KNOWLEDGE AND LOVE OF THE  TRINITY.
I. The mystery of the Blessed Trinity far transcends the intelligence of man, yet it is not, on that account, altogether beyond his reach. He is able to apprehend it in some degree even during this life. And it must needs be so. Man is made by the Holy Trinity ; he is made for the glory of the Trinity ; and he is to be made happy by the possession of the Trinity hereafter. Therefore he is adapted by his constitution and his faculties to possess a certain understanding of it here and hereafter ; and he can accommodate himself to it in this life if he will. Man s knowledge of the Trinity at present is obscure, it rests upon faith, and not upon sight or complete evidence ; but in the next world it will rest on direct vision and perception. In view of this, man has been made in the image and likeness of the Trinity ; and the vestiges of that mystery have been imprinted on various parts of creation for his instruction. Although those indications are hardly such as to suggest the nature of God s being apart from revelation, still they corroborate the doctrine and illustrate it when it has once been made known. Angels and men alone out of creatures are able to recognize the Triune God. It is the special distinction and dignity of intelligent beings. This knowledge, scanty as it now is, is of far higher import to you than all the science of mundane things. Let it be always the light and consolation of your life.
II. Further, the doctrine of the Blessed Trinity is the distinctive mark of Christianity, separating it from the systems of the Jews, Mohammedans, Unitarians. Without this there can be no proper knowledge of the character of Jesus Christ as Son of God, no comprehension of His great work as Redeemer, no real and efficient belief in Him. It must be known and accepted fully in order to membership in the kingdom of God on earth. The Trinity is the object proposed for our attainment in the future life. To attain it, man needs to know whither he is going, to direct his efforts accordingly, and to prepare himself intellectually and spiritually. So the Trinity is one of the great truths which must be accepted as a matter of rigorous precept together with the Unity of God, the future life, and the Incarnation and Death of Our Lord. Meditate on this great doctrine, and try to fathom its secrets as far as may be granted to you on earth. How lamentable it is that so many millions should be absolutely ignorant of it, and that so many others, nominally Christians, should practically neglect it I Make it your duty to extend the knowledge of it.
III. It is more important to love the Blessed Trinity than to understand it, to honour it than to scrutinize it. We are bidden to love the Lord Our God with all our heart, and soul, and strength, and mind ; there is no command to comprehend Him thoroughly, to investigate deeply, to speak learnedly. On the contrary, we are told that if we search too far into His majesty we shall be overwhelmed by the glory (Prov. xxv. 27). Difficulties increase with greater knowledge, at the outset. A moderate knowledge suffices to furnish the basis of an exceedingly great affection. In this life at least, the illumination of the intelligence need not necessarily keep pace with the inflaming of our will. By knowledge we draw the object towards our minds, which are not capacious enough to contain it; by love we are drawn into the divine object, and it is great enough to contain and to satisfy our hearts. Rejoice that you have at least one faculty which is capable of entering into intimate union with the Blessed Trinity. If your curiosity is thwarted, at any rate you can give full rein to your affections. Your love here will be the measure of your understanding of divine things in the next world. Seek always for knowledge, but with the practical object of increasing your love.
MEDITATIONS ON CHRISTIAN DOGMA BY THE RIGHT REV. JAMES BELLORD, D.D.
Email Post