MEDITATIONS ON CHRISTIAN DOGMA. TREATISE II. 5. THE RELATIONS OF THE DIVINE PERSONS. 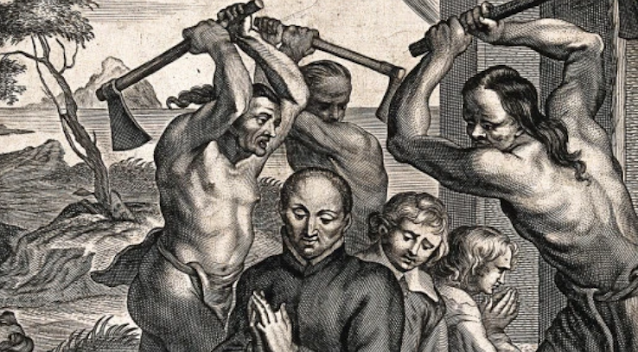 St. Isaac Jogues and the Martyrs of North America
MEDITATIONS ON CHRISTIAN DOGMA.
TREATISE II.
5. THE RELATIONS OF THE DIVINE PERSONS.
I. The distinction of the personalities in the Trinity is constituted by the relations resulting from the intrinsic activity of the One God. Life, in modern language, is responsiveness to environment ; or, action produces relativity. How is this ? Action is a kind of movement ; movement involves a thence and a thither; it must have a subject, an object, and a point of communication between them. Thus human activity is composed of our relations to God, men, and things. Relation is the connecting together of distinct things. A complete drawing together would be unity ; a complete separation would be plurality ; perfect relation consists of the two things ; it is plurality in unity. For instance our bodily life is unity of action in plurality of organs ; intellectual life is unity of consciousness with plurality of thoughts ; a State is unum e pluribus. The relation becomes more perfect as the unity is founded on a fuller similarity of nature between the two things related. The internal activity of God involves internal relationships, and those of the most perfect kind, i.e. with a most perfect community of nature. God is Life ; the highest activity of life is fecundity ; and this is the chief source of plurality in unity. God is Goodness ; and goodness, communicating itself, involves unity and plurality. God is Beauty ; and beauty arises from harmony in multiplicity. All this involves that there be in God some form of supreme plurality in unity. Your relations are with God and your neighbour. Religion is the regulation of these. Charity is your highest activity, binding you to God and men.
II. The perfection of the divine life and activity involves the existence of relations within the Godhead itself, that is, of plurality in unity. God must be supremely one and in divisible. There cannot be two infinite beings ; the fact of multiplication would be in contradiction to the idea of supremacy and infinity. What kind of plurality, then, is possible simultaneously with this unity ? Only a plurality of relationship arising from the action of the one Being within His own substance. We must not then conceive of the Trinity as resulting from the coalition of three separate individuals into a higher unity, but as a supreme unity which produces within itself the terms of its operations. Such a plurality, far from being a contradiction of unity, requires for its perfection that there be absolute unity of substance. There is a sort of parallel in nature. A body has three dimensions, length, breadth, thickness. These are distinct from one another ; they are not, however, separate beings combined into one ; they are relations existing in the one substance. The plurality of relations requires the unity of the one solid body. So in the Divinity, a supreme unity is necessary in order that there be an intrinsic activity producing relationships within it. Adore this incomprehensible mystery and thank God for granting you some indication, however obscure, of the grandeurs of His Divine Nature.
III. The relations arising from the activity of the divine intellect and will result in three distinct conscious personalities. There are terms or objects of the activities, and reciprocal relations between those terms making them separate, though within the same unity of substance. Each of the terms is a Person conscious of His individuality. The Divine Essence communicates all its attributes in its intrinsic productive action, and each Person therefore is God. The Divine Essence, as the source of the activity and the relations, is the Father; the same Divine Essence, as the term of the action of the divine intellect, is the Son ; the Divine Essence, as the term of the love of Father and Son, is the Holy Ghost. There are parallels to this in man. Man generates a son, who is a separate personality ; he generates an idea, and this exists in the unity of his substance. God s one activity combines the two things. Its term is separate as a personality and is one in the same substance. Adore and admire.
MEDITATIONS ON CHRISTIAN DOGMA BY THE RIGHT REV. JAMES BELLORD, D.D.
Email Post