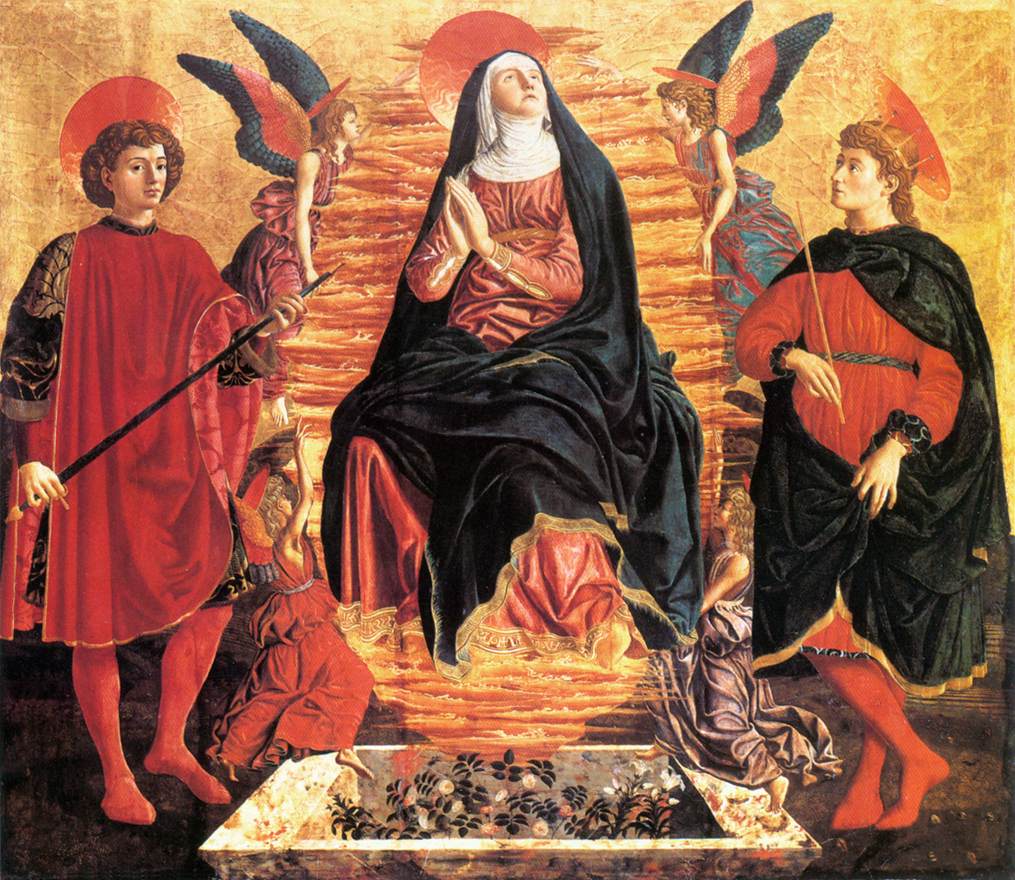 ANDREA DEL CASTAGNO
Our Lady of the Assumption with Sts Miniato and Julian
1450
MEDITATIONS ON CHRISTIAN DOGMA
TREATISE I. GOD.
31. REPROBATION.
I. Reprobation is the decree of exclusion from heaven passed by God on those who, as He sees, will be obstinate in sin and die impenitent. It is not that it pleases God to condemn the creatures whom He loves ; it is not that He exercises a right of excluding creatures from that which they have no claim to. " God made not death, neither hath He pleasure in the destruction of the living" (Wisd. i. 13). God is unable to do wrong, to be a source of evil, to be unjust, harsh, arbitrary. Only Calvinism has dared to assert such a thing. Reprobation is this, that God, who foresees all things, foresees also from eternity the wilful self-destruction of some of His creatures. He foresees their revolt, their turning from Him, and His turning from them which is involved in it. He permits this determination of their free-will ; and the prevision and ratification of it is called the decree of God. He cannot do otherwise. He cannot but foresee according to facts, as we cannot see differently from the facts that occur before our eyes. God s foresight no more necessitates the event than does our remembrance of a past event. Our remembrance is unalterable, but it is not that which makes the past event unalterable. This terrible secret God knows about you. He sees you at this moment as you will be a hundred years hence. Pray that it be a prevision of eternal life and not of death. " My lots are in Thy hands" (Ps. xxx. 16).
II. The decree of reprobation is not passed in consequence of our fall in Adam ; for that we are not responsible and deserve no punishment. Nor is it decreed against us simply for our sins ; for the present dispensation is a system for regenerating all sinners, whatever they may have done. God loves us for our very weakness ; the quality of sinners is one that touches His heart more than that of innocence even ; and He desires our salvation the more earnestly, if it be possible, as we deserve it less. We have the proof oi this in the parable of the Prodigal Son. Judas might have found a place in heaven as well as St. Peter, the bad thief as well as the penitent. Reprobation is the consequence only of obduracy, hardness of heart, persistence in refusing the pardon which is offered even up to the last instant of life. In fact many a lost soul has enjoyed more abundant and greater graces than some now in heaven ; and among the blessed are some who have been more grievous sinners than some of the lost. But " a hard heart shall fear evil at the last, and he that loveth the danger shall perish in it " (Eccli. iii. 27). Take care not to harden your heart ; it may easily grow to a final and fatal hardening.
III. Why has God allowed the reprobate to come into existence ? To prevent their existence would be to carry on the natural order by a series of supernatural interferences ; and no one would object more to such a thing than the enemies of God themselves. Miracles are rare events ; they too occur in accordance with law, and require an adequate cause to produce them, such as prayer, the merits of a holy life, the need of proving a word of God. The reprobate do not furnish an adequate cause for miracles. Fidelity to small graces induces greater ones ; obstinate resistance to abundant grace and evidence tends to dry up the stream rather than to promote a more copious flow. It is surely enough for the obstinate sinner that he has the power of escaping from the sentence of reprobation, and that God is ready to help him if he only cares for help. It is for him to accommodate himself to the general laws of being, and not for the whole course of nature to be continually modified in deference to his perversity. The ways of God are inscrutable to your limited vision. Do not expect to penetrate them in this life. Wait with humble faith for the revelation of God s secrets, and say, " I shall be satisfied when Thy glory shall appear (Ps. xvi. 15).
MEDITATIONS ON CHRISTIAN DOGMA BY THE RIGHT REV. JAMES BELLORD, D.D.
Email Post