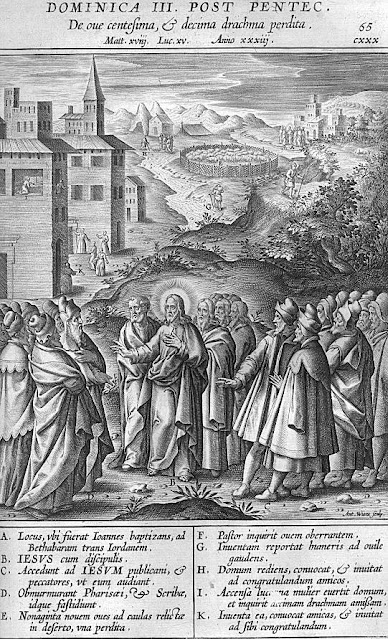 And Publicans, and Sinners were approaching or drawing near unto him.

It is not said here, that the Publicans and Sinners came to Christ, but approached or drew near unto him.
Peradventure they were so ashamed, & confounded with their sins, that they thought themselves unworthy of his presence, but stood a far off, to show themselves only, til they were bid come near, & were affected with deep humility, much like that Publican in the Gospel, who being in the Temple at his prayers, did not vaunt of his good works, as the Pharisee did, but stood a far off, and durst not lift up his eyes towards heaven, but knocking himself on the breast, (a sign of sorrow for his sins which Catholic still use) said, O God be merciful unto me a sinner.

When we are far off from one that should yield us succor and aid in our distress, we must call and cry out loud, else he cannot hear us.

By mortal sin we are far distant from God that must be our helper, (for none else can) when we are therefore in that kind of sin, we must call and cry out loud unto our merciful Lord God, and he will hear and help us: and no louder cry is there, nor none so soon to be heard, as a deep humility, shame, and confusion for our sins, as the said Publican in the Gospel haad, & as these Publicans and sinners here had, that thought themselves unworthy to come into the presence of Christ without bidding, but only approached, and put themselves in his sight a far off, thinking themselves further off from him, by reason of their sins, then that they were worthy to be admitted to his presence; but the further off they were from him in this respect, the nearer they were to him, in so much that he did not only admit them to his presence, nut did eat familiar & lovingly with them, as familiar friends use to do: where we have this comfort, that the further off we think ourselves from God for our sins, out of true humility, and lowliness of heart, the nearer we are unto him, and the better doth he see us: for as the prophet David saith; God is one that beholdeth the proud a far off, that is to say, such as think themselves to be nigh unto God in comparison of others, as these Scribes and Pharisees did, who cavilled with Christ for eating with Publicans and sinners: such as these saith the Prophet David, God beholdeth a far off, as we do things a far off, to wit, scarcely seeing them, or not at all; but the humble which think themselves far off from God in comparison of others or of what they might be themselves if they would, he beholdeth as if they were nigh; for though they should be neigh no way else, yet their humility maleth them nigh: There are some, as St. John the Evangelist saith, that think themselves rich and wealthy, & to have need of nobody (he meaneth in spiritual riches) and yet are poor and wretched, and miserable, and blind, and naked: & if they were not so indeed, yet their very conceit and proud persuasion that they are not so, is enough to make them so in the sight of God.

There be others that be rich indeed in the service of God, and yet when they have done all they can, they think themselves, as Christ teacheth us, unprofitable servants, to have done nothing in comparison of what they might do, or others would, if they had the like grace, and means.

So humble St. Francis would always say to his Brethren, though they had served God never so well: Go to, brethren, hitherto we have done nothing, let us now begin.

Those that think themselves rich as aforesaid, God beholdeth a far off, and sendeth them empty away: but the humble as our blessed Lady did sing in her spiritual song called Magnificat, or in english, My soul doth magnify our Lord, God beholdeth as nigh unto him, and filleth with good things, she herself being one that might best speak it, having best experience thereof.

Humility, that is to say, to be poor inspirit, to think poorly & meanly of ourselves, as we have cause to do though we were never so good, in comparison of some others, or what we might be ourselves if we sould, is so sovereign a virtue, that if we has no other but that, it were enough to approximate, and make us nigh unto God.

This was that virtue, for which the Blessed Virgin Mary (though she was full of all other virtues) God so respected, as to make her the Mother of Christ, she naming no other virtue, but that, he regarded te humility of his handmaid, as if that only were enough.
A Plaine Path-way To Heaven Thomas Hill 1634