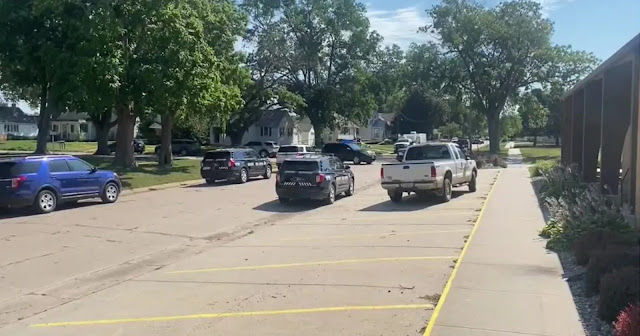 Multiple dead across multiple sites in Laurel, Nebraska: Explosion rocked two properties at 3am and officials in hazmat suits are responding
Nebraska State Patrol is investigating multiple fatalities after an explosion in the early hours of the morning in Laurel, Nebraska. An unknown number of people were found dead in two homes, with authorities confirming that fire was 'involved' at both locations. Officials with hazmat suits can be seen walking towards the scene early Thursday morning. There are thought to be multiple scenes in Cedar County, with law enforcement concentrated around 3rd and Elm Street. The perimeter is understood to extend beyond the street, with witnesses reporting seeing and hearing an explosion at 3am. Laurel City Hall officials told DailyMail.com that they were advised to enter a 'recommended' lockdown status by the Cedar County Sheriff’s Office. Witnesses in Wakefield claim that a school there is on lockdown, with other businesses and buildings in Laurel also being told to close ranks. Cody Thomas, a spokesman for the Nebraska State Patrol, said state investigators were headed to Laurel . Source
Email Post